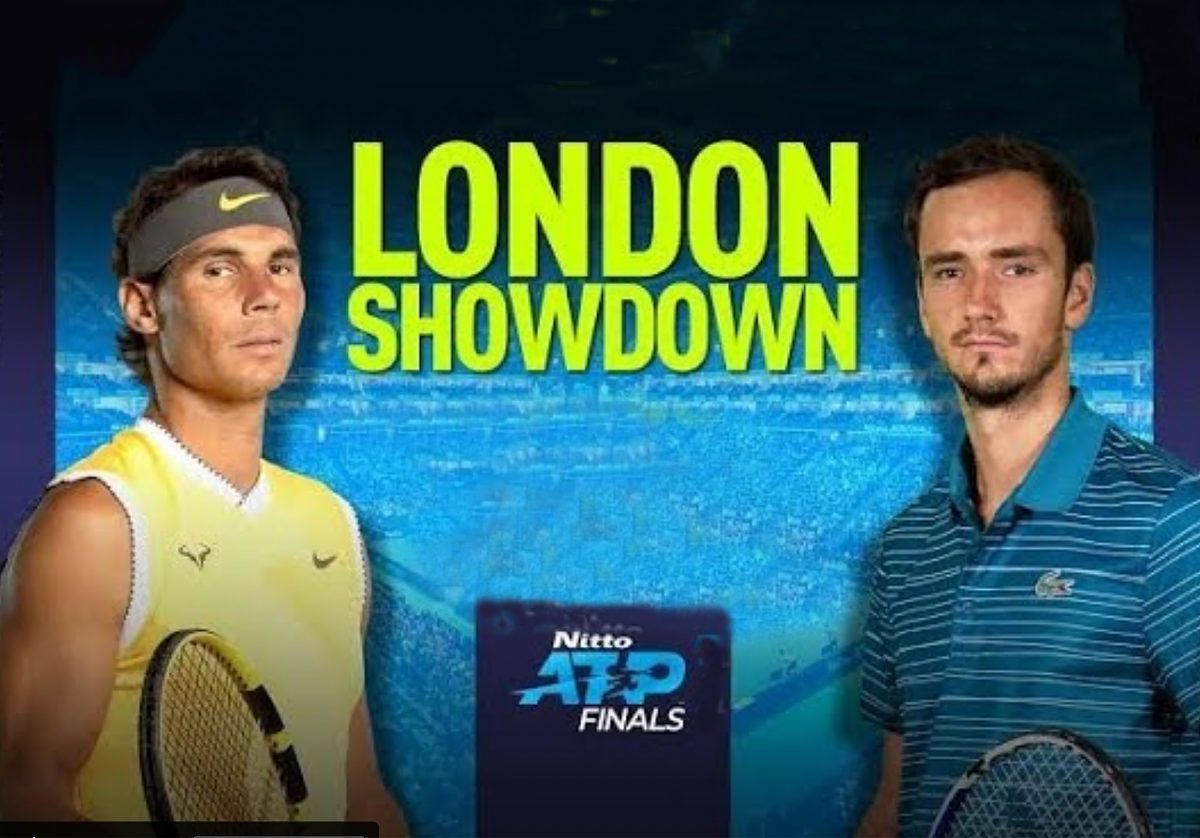 Facebook0Tweet0LinkedIn0Pin0
Rafael Nadal tightened the race for year-end No. 1 status with a spectacular final-set comeback on Wednesday, arving out a 6-7(3), 6-3, 7-6(4) fightback over Russian Daniil Medvedev at the ATP Finals.
The replay of the September US Open final won by the Spaniard looked done and dusted as Nadal trailed 5-1 in the third set. Along the way, the 33-year-old saved a match point to stay alive.

“I was super lucky,” a relieved Nadal said. “Daniil is a tough player and was was playing much better than me today.

“This the comeback today was one in 1,000.”
Nadal improved to 3-0 over the 23-year-old Russian, whom he defeated two months ago in New York to claim a 4th US Open title and a 19th Grand Slam trophy.
The Spaniard who has never won this title suddenly unleashed his game from the depths of potential defeat with an epic comeback to hand Medvedev a second loss in group play at the season wrapup in London.

Nadal claimed victory as a Medvedev backhand which looked to have kissed the sideline was determined out by electronic linecalling.

Nadal’s win swings the pressure back onto Novak Djokovic and Roger Federer, who face off in their final group matches on Thursday. Djokovic is racing to try and overhaul Nadal and claim year-end top ranking honours.
After Nadal’s victory, Djokovic needs to win the entire tournament if he wants to re-take the top for the season.
Medvedev grabbed the early lead as he claimed a 62-minute opening set which had to be decided by the tiebreaker.

The Russian claimed the opener with seven aces and never faced a break point as he put the top seed into difficulty.

Nadal stuck back hard to win the second set to level, winning 16 of 22 points on serve and breaking twice.
Medvedev broke to start the final set, taking a tighter grip with a double-break for a 3-0 margin.
The Russian who reached six straight ATP finals over the summer and autumn moved out to 4-0 command as the Nadal challenge faded along with hopes of retaining the No. 1 ranking for the season.
But the Spaniard started a fightback trailing 5-1, twice breaking Medvedev as the Russian served for the match and pulling the afternoon level at five games apiece on a running passing winner.

Along the way, the veteran saved a match point at 5-1 as the massive momentum shift materialised .

The struggle lasted for nearly three hours, with Nadal producing 26 winners to the 40 of Medvedev.

After the match Nadal was loathe to put any special emphasis on his fightback from 5-1 down in the third set which evolved into a 6-7(3), 6-3, 7-6(4) defeat of Daniil Medvedev.

Nadal, who had saved a match point along the way against the Russian whom he beat in the US Open final in September, insisted there was nothing special about his performance.

In fact, he could barely rate the epic which went for almost three hours.

“It was not one of the best performance of my career, I really hope that I can play better,” the 19-time Grand Slam champion said.

Winning this match was a combination of a lot of things: lucky, some mistakes of Daniil, some good moments for  myself at the end.”

Nadal said that the abdominal muscle injury which forced him to quit the Paris Masters has not been a problem, with his fitness improving by the day here with one final round-robin match to go on Friday.

“Only being able to increase the practice level only two days ago, this is a very positive thing,” he said..

“I’m very happy with this (improvement). Win or lose is another story.”

The 33-year-old who has never won a year-end titleadmitted that he had not been counting on pulling off a miracle on court.

“In that moment (facing a Medvedev match point, which he saved), you think in five minutes you are in the locker room, that’s the normal thing.

“You are not playing with much pressure because you have almost lost.

“I played a great point and then I was able to save that game. Even with 5-2 is so difficult to think about comeback against a player like Daniil, especially indoors.

“On clay, you have more chances because normally you play more points. But here, you are in his hands.”

“Being only one break away, why not? I need to create the moment and I need to put the pressure.

The victory in 75 minutes narrows the possibilities for the remaining pair of places in the final four for the Saturday start of the knockout stage.

Against his German opponent, Tsitsipas sent over eight aces and broke three times.

The win by Tsitsipas was his third this season against Zverev, with the other victories coming in Madrid and Beijing.