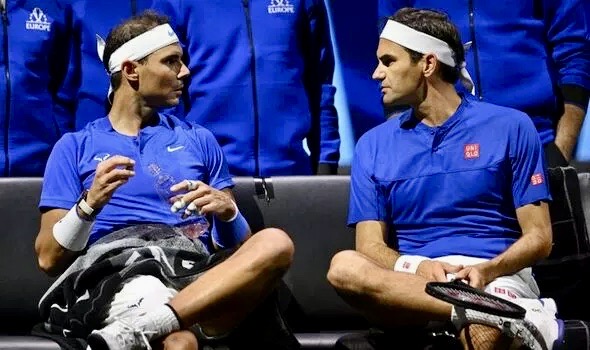 Rafael Nadal shed nearly as many tears as did retiring friend Roger Federer as the iconic Swiss hung up his racquet as planned after losing a Laver Cup doubles rubber alongside his longtime Spanish tennis rival on Saturday.

The pair who went down to Jack Sock and Frances Tiafoe at London’s O2 look to remain close even with the Swiss now on the sidelines of the sport where he achieved domination which launched nearly two decades ago.

Nadal, five years younger than Federer, shared in the tears, the public celebrations and the private anguish after being told privately 10 days ago of Federer’s decision after three years and three knee surgeries.

“It’s been super long and positive journey,” the Spaniard with the record 23 Grand Slam titles said.

“(Our rivallry) started when I arrived on the Tour, and when I started to be a better player: Roger was always there in front of me.

“For me was always the guy to beat.”

Nadal, who may soon be receiving advice on child-rearing with his wife expecting their first within weeks, said there will never be another opponent in his life like the Swiss.

“At some point we were probably the biggest rivals – I think always in a very good way.

“We respect a lot each other’s families, teams. we never had big issues.

“Every year the personal relationship gets better and better, on a daily basis. I think in some way we understand that at the end we have a lot of things similar.

“We approach the life probably similar.”

.Nadal feels he will always have a confidant in the tactful Swiss, considered one of the absolute best to ever play the game.

“We can trust each other, we can speak very often, and we’re able to speak feeling very free, feeling confident.

“I feel confident to talk about any personal thing, it’s something that it’s very beautiful after all the things that we shared together and all the important things that we fought for (for) such a long time.

“I’m very proud to be part of his career in some way. But even for me it’s happier to finish our career like friends after everything we shared on court like rivals.”