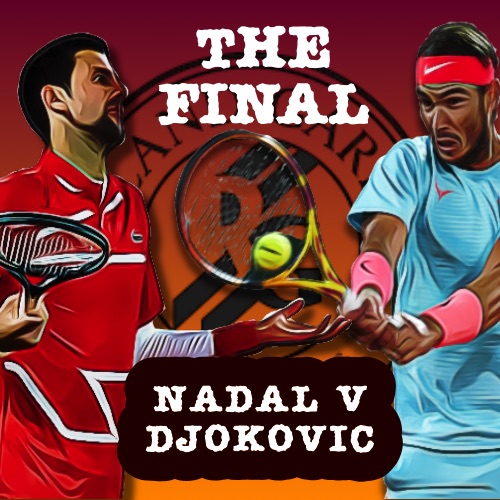 History will be made today in Paris when two of the best tennis players in the world meet head to head.

Novak Djokovic is looking to become the first man in the Open Era to win all four majors at least twice.

But who will triumph?

They have played each other 55 times on clay, hardcourt and grass. Djokovic edges it 29-26.

Except this is Paris and Nadal is 6-1 against Djokovic on the clay.

Nadal hasn’t dropped a set this year on his way to the final and has admitted he still has plenty to improve on.

He will play with his usual fire and intensity, there is no other way for Rafa.

The key will be his serve and court positioning as Djokovic is the game’s No.1 returner.

For Djokovic, it’s also about serve, then it’s about his backhand versus Rafa’s forehand. What a mouth-watering encounter.

Many experts are saying whoever serves best will win, but there is much more to this clash than just service.

The last time the pair clashed on the red dust of Court Philippe Chatrier was in 2015. Djokovic won that day in a quarter-final thriller.

Djokovic won again in Rome a year later, but hasn’t seen victory on clay since.

“This is the House of Rafa,” Djokovic said this week. But can he topple the King of Clay in his own backyard?

Djokovic sees an advantage with an autumn tournament.

The weather is cooler and conditions heavier. Rafa has even complained about the cold and the way the balls have played.

“The conditions are different than the ones that we are used to playing in May and June,” Djokovic said.

“I think that could be a better chance for me, obviously the ball is not bouncing as high over the shoulder as he likes it usually.”

But Nadal won’t let a drop in temperature affect his game. He has already said he has adapted to the weather conditions.

“Different circumstances, different kind of tournament and different situation,” he said this week.

“The only thing I know is to play against Novak, I need to play my best. Without playing my best tennis, the situation is very difficult.

“He is one of the toughest opponents possible.”