Murray will be ready if the Open is played: Lopez 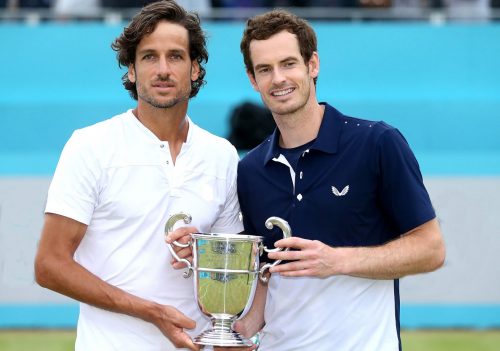 Andy Murray mate Feliciano Lopez believes his occasional Scottish doubles partner will be keen to play the US Open if the event can be staged amid the COVID-19 confusion.

With tennis officials due to announce the fate of the New York major any day now, Lopez has told British media via Zoom that he feels Murray is all-in for a return to competition.

The 33-year-old Murray, who won a title in Antwerp last autumn, has undergone two major hip surgeries in as many years and has not been a regular on the ATP for several seasons.

But Lopez, also tournament director of the Madrid Masters, believes that his tennis mate is chomping at the bit to get stuck in.
“I was talking to him (last week) and he was really pumped about the US Open,’ Lopez, 38, said. “He was starting to practise again. He was positive (that) he might be able to compete again.

“I’m crossing my fingers to see Andy playing again, of course. It would be great for everybody, especially for him.”
The Spaniard added a caution, though: “‘He needs to wait a little bit to see how the hip is going to respond.

“But he was positive. He has started to play a little bit, and I think he’s really keen to play if the US Open is finally happening.”

If the Open can go ahead, it is likely to be a closed-door affair, with a reduced doubles draw, all players confined to a JFK airport hotel and only allowed out to be driven to the tournament site – where there will be no interaction, no showers, no locker rooms and no food.

Those rumours have prompted No. 1 Novak Djokovic, No. 2 Rafael Nadal and third-ranked Dominic Thiem to express their doubts about playing – especially with the addition of a possible 14-day quarantine for foreigners by US authorities.

Roger Federer is recovering from a second right knee procedure and will not be back on court until next season.
Murray will test his form after playing his last official match in November when he competes in all-British event organised by his doubles-playing brother Jamie at the National Tennis Centre in London, June 23-28.