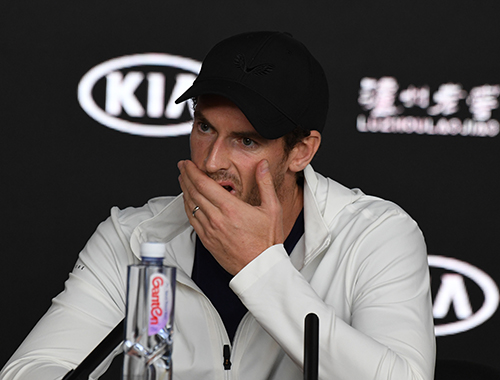 A year after a tear-stained five-set loss at the Australian Open which led directly to a second hip surgery, Andy Murray has been promised a coddled existence when he plays in January’s 2020 edition.

Melbourne officials jumped the gun slightly in Tuesday presentation of the first major of the new season, announcing Murray as a sure thing for the major which begins on January 20.

But as the 32-year-old former No. 1 tiptoes through this autumn’s serious attempt at a comeback to the ATP, his competitive future is not a 100 per cent positive on any future aspect of his career.

But his situation does appear to be on the up:

“I have no pain in my hip. It makes a huge, huge difference to everything. Not just my tennis but everything away from the court, as well,” he said this week in Shanghai

“Before, I was just consumed by this pain in my hip. It was like every minute of the day, it was very, very tiring.

“I found it really hard towards the end before I had the operation, and now, obviously, I’m able to play. I’m able to do lots of different things.

“It was a big, big change for me, and I’m really happy. I wish I had had the surgery sooner, but I’m very happy I’m in this position now.”

Open officials are looking on the sunny side as they tout the Scot’s intended return to Grand Slam singles after sitting out Paris and  the US Open and making a token one-round doubles appearance with Serena Williams at Wimbledon.

Murray has been left wanting five times at Melbourne Park with runner-up showings, the most recent in 2016.

Last January, after losing a painful struggle with Roberto Bautista Agut in the first round, the three-time Grand slam champion broke down as he said he could not play on during 2019 in pain.

Days later he underwent his second hip op in a year; he has since attempted doubles play and is now competing in a four-week run in Asia and Belgium which will test his stamina and the success of his surgery.

“Confirmed: @andy_murray will return to compete at the #AusOpen in 2020,”adding the proviso that Murray would enjoy all the benefits of an injury-protected place in the 128-man draw.

The current No. 289 is playing this week in Shanghai after an optimistic Beijing quarter-final.

Meanwhile, Open officials did their best to hype the upcoming edition, revealing that the tennis celebrations will now push the boundaries by spreading into nearby central Melbourne and as well as dominating the city’s riverside sporting precinct.

Venues which will now become part of the tennis fortnight include Federation Square, the Birrarung Marr area and the green area all the way up to Richmond railway station.

The whole show will now last for three weeks, with the actual tennis taking the last two.

Tennis Australia will also be making an investment in joining Indian Wells in California by adding electronic linecalling to all courts; that will be in place  during January 14-17 qualifying, a free event for fans.

Punters will now be able to enter the new Practice Village, which allows up close viewing at the only one of the four majors which restricts media practice access.

Practice viewing platforms copied from the US Open and Indian Wells will also be added.

Players will get their usual round of expensive annual improvements – along with more prize money as has become habitual.

Among the goodies on offer for 2020: new gym, treatment and recovery areas, including hot and cold plunge pools and increased player dining, and an on-demand city shuttle service.