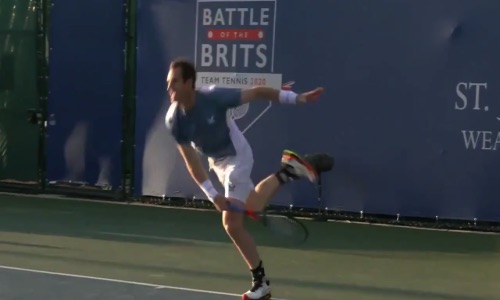 Britain’s Andy Murray suffered defeat in a mixed doubles encounter at the Battle of the Brits tournament, as he steps up preparation for the US Open.

Murray, who has not played on the ATP Tour since winning the European Open in Antwerp last November, teamed top with Jodie Burrage, but the pair were beaten by Joe Salisbury and Emma Radacanu 4-6 6-4 10-8.

The former world No.1 is only playing in the doubles at the mixed team exhibition event in Roehampton.

But there were words exchanged at the end of the match when Evans was upset with the force at which Edmund touched his racket – a gesture which has replaced the handshake.

“It was nothing. He said he misinterpreted touching the rackets and stuff,” Edmund said.

“There was nothing there. The racket touch is not that a big a deal to be honest.”

Johanna Konta fought back to beat Katie Boulter as she found some form after an embarrassing loss on day one of the event on Monday.