Memo to big three: The Russians are coming 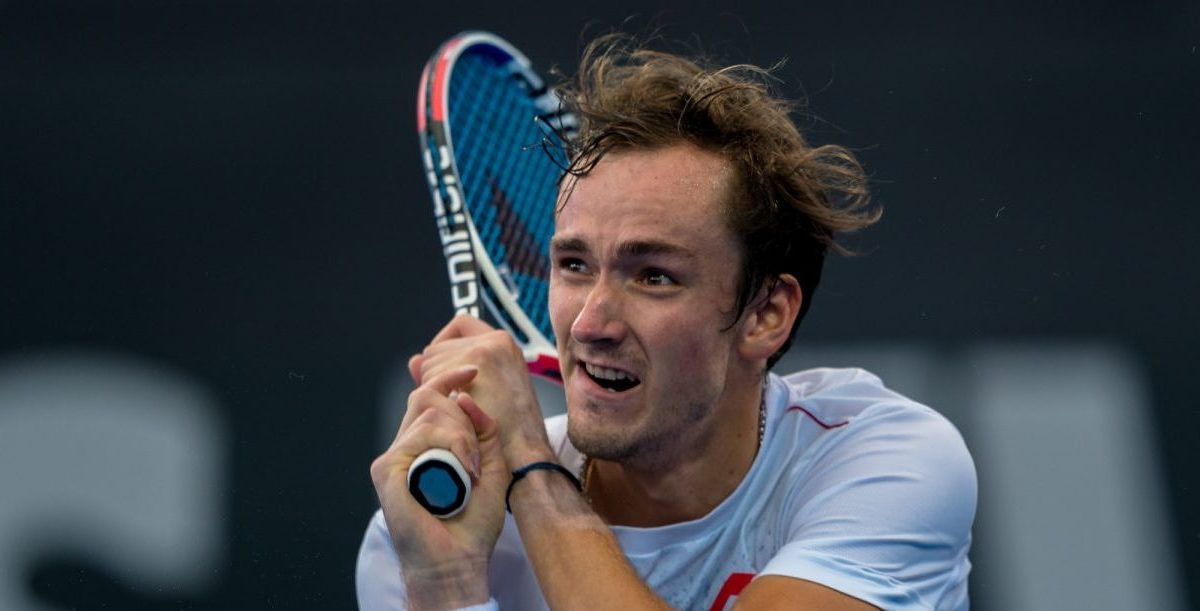 As the final Grand Slam tournament of 2019 is about to begin at the US Open, the triumvirate of male tennis icons that have dominated the world scene, almost since the turn of the century, are bracing themselves for another concerted challenge from the younger ranks.

And the message is ominously loud and clear for Novak Djokovic, Roger Federer and Rafael Nadal: the Russians are coming.

Or one Russian in particular. If the last few weeks on the unforgiving cement courts of North America have taught us anything, the biggest threat to the ruling trio, which has amassed 54 major titles between them, including 11 on the blue-coloured New York Deco turf at Flushing Meadows, is unquestionably Daniil Medvedev.

The 23 year-old is currently the form player of the ATP Tour. Winning a first Masters series title at the recent Western and Southern Open title in Cincinnati was hugely significant but prior to that Medvedev reached the the finals of both the Coupe Rogers in Montreal and Washington DC’s Citi Open.

A semi-final win over Djokovic in Cincinnati was the highlight of the run but other seeded players such as no.5 Dominic Thiem, fellow Russian top tenner Karen Khachenov, former champion Marin Cilic and Belgium’s diminutive David Goffin as well as Britain’s Kyle Edmund all fell to Medvedev.

Curiously both Medvedev and Djokovic emerged in the same quarter of the draw made electronically at Flushing Meadows on Thursday. Djokovic starts his title defence against the 76th ranked Spaniard Roberto Carballes Baena while India’s world no.89 Prajnesh Gunneswaren will provide Medvedev’s first round opposition.

The experienced trio of 23rd seeded former champion Stan Wawrinka, 16th seeded Kevin Anderson, the 2017 runner-up in New York, and Fabio Fognini, no.11 seed, all sit in the same quarter. However recent form suggests Djokovic and Medvedev could meet for the sixth time at the quarterfinal stage and the Russian has won both 2019 encounters, a 6-3,4-6,6-2 win in the Monte Carlo Masters backing up his credentials.

Great as the Federer/Nadal/Djokovic era has been, there can be no denying that a new champion would be most welcome to freshen the mix in the same way that Juan Martin del Potro did with his powerhouse victory ten years ago or an inspired Cilic achieved with similar effect in 2014.

According to the New York bookmakers, the top trio are again way out ahead of the rest of the field. But history suggests a change could be imminent and Djokovic will be well aware that nobody has managed to win back-to-back US Open titles since Federer in 2007 and 2008. 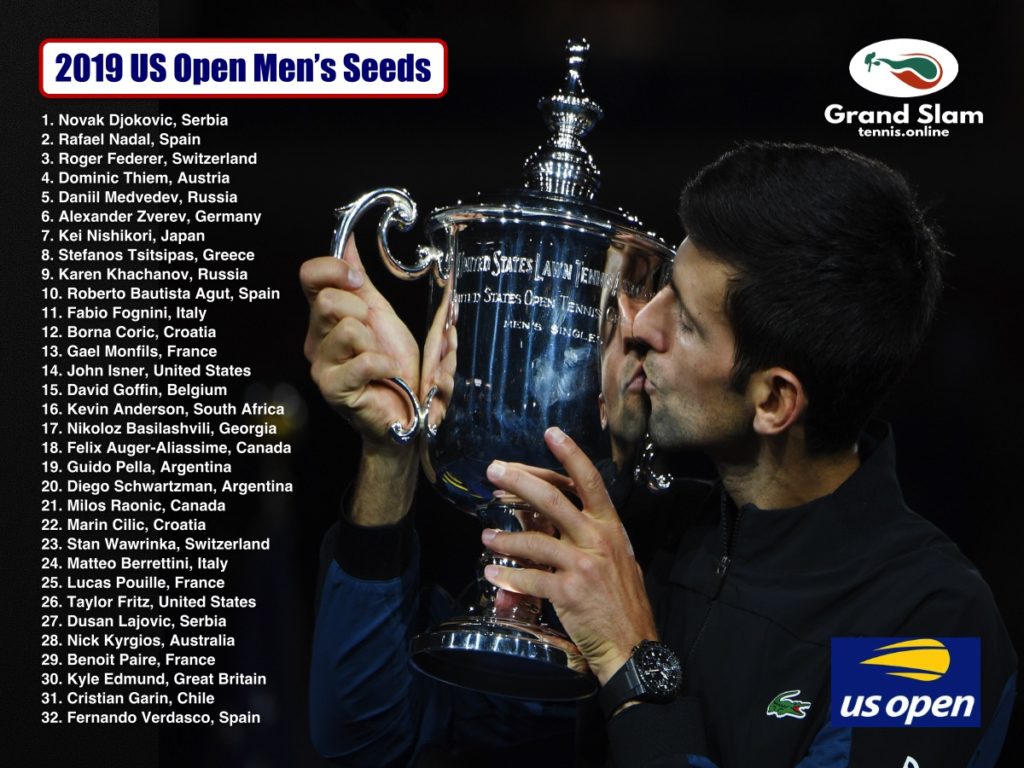 Though defending US Open champion Djokovic is no longer exactly licking his wounds from his semi-final exit in Cincy, he remains full of respect for Medvedev and the strength of the Russians game that promoted him into the list of serious New York contenders.

“Daniil is definitely one of the best players in the world at this moment,” maintained the world no.1 and top seed in New York.”

“He deserves to be in the contention for the big title but this is a different kind of tournament. It’s best of five sets, it’s seven matches, it’s for two weeks.

It’s a Grand Slam. It’s a different environment, a different experience. It just takes much more than just your game. I think it takes patience and ability to know how to deal with all the off-court things, the importance of a slam.”

Medvedev’s imagination for achieving great things with a racket in his hand was ignited back in 2000 when another youngster from Moscow called Marat Safin proved that even the legends of the sport are susceptible to sheer force and all out attack.

Then it was Andre Agassi and Pete Sampras who formed a dominant duo and it was Sampras who had his sights set on a fourth US Open title. After dropping just a solitary set on his route to the final, he was the overwhelming favourite to beat 20-year-old Safin who was then wrongly judged by many supposedly learned observers to be too tall and gangly, and most certainly lacking in concentration, to prevail in such esteemed company.

Safin’s 6-4,6-3,6-3 winning score line in the final dispelled such assertions as garbage and back in Moscow a young Medvedev, who would grow to an adult height of 6ft 6ins, was given a focus for his ambition.

Medevev has of course still to assert himself in a major competition. There are proven quality players who have still to learn the special nuances and demands of a Grand Slam tournament with Sacha Zverev the most obvious in today’s top flight.

Djokovic added: “In the Slams, he (Medvedev) still has yet to break to the last four of the competition. Grand Slams have so many challenges for a player , both on and off the court. It messes up with your mind at times. But over the years, you gain experience and that helps you.”

However what is beyond dispute is that Medvedev is a vastly improved player this year. Armed with thunderous serves and robust groundstrokes, the Russian who first moved with his family to Antibes in France and now resides in Monte Carlo, is very much the man of the moment.

The most recent two results, each in ATP Masters Series events, propelled Medvedev to a career high ATP Tour ranking of world no.5 and the 3-6,6-3,6-3 semi-final win over Djokovic in Cincinnati provided evidence that no opponent is safe against his force.

Medvedev dispelled the theory that Djokovic was unbeatable once he had the first set in his possession and provided the first defeat in six years for the Serb at such an advanced stage of the ATP Masters event.

“These three weeks have been amazing and the best in my life,” said the Cincinnati champion who collapsed with exhaustion after his final win over Belgium’s David Goffin.

“I would have said that even without the trophy in in my hands but actually with it is so much better. And after winning the final, I no longer have to ask myself questions.”

However Medvedev continues to adopt a pragmatic ‘feet on the ground’ attitude despite his elevated status and refuses to take anything for granted as he finalises his preparations for his third main draw visit to the Billie Jean King Tennis Centre.

He now has five ATP titles to his name – all of them won on hard courts with triumphs as Sydney, Winston Salem and Tokyo last year followed up by another title in Sofia just after this year’s Australian Open.

“I have proved to myself in Cincinnati that I can win a Masters Series title but winning a Grand Slam is different,” said the player whose most impressive Grand Slam showing came in Melbourne.

“At this moment I haven’t been in the quarterfinal of a Grand Slam event yet.”

“So when somebody asked me about the US Open in Montreal, I said, I’d be satisfied with the quarterfinal. Then I did well in Cincinnati so my thoughts are now it doesn’t mean I will be content with just a quarterfinal.

“If I will be in quarterfinal, I will try to do my best to win everything. But at this moment I need to take it step by step and just become better player every day.”

The next fortnight will be the most stringent test of Medvedev’s potential yet. In conclusion he stated: “Hopefully I can continue this way doing well through all my career. But for the time being, hopefully at least, the next few weeks will do.”

While the US Open women’s singles draw threw up the five star clash of former champions in Serena Williams v Maria Sharapova, the pick of the men’s first round sees a meeting of the two highly rate young Canadians Denis Shapovalov and 18th seeded Felix Auger Aliassime.

Barry Flatman was one of the world’s leading tennis correspondents, with for more than 25 years covering the game. The main body of his work appeared in the Daily Express and the Sunday Times in the United Kingdom but his byline also appeared in The Times and the Daily Mail. He was the inaugural president of the International Tennis Writers Association and served two terms as chairman of Britain’s Lawn Tennis Writers Association. He broadcasts regularly on the BBC and talkSport Radio and ghost wrote Pat Cash’s best selling autobiography Uncovered.