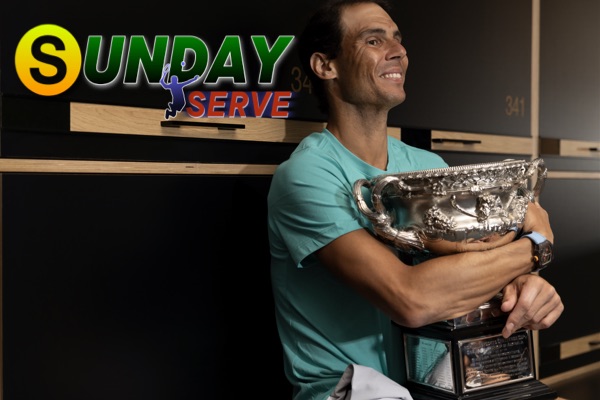 A week is a long time in professional sport, but before we forget and move on to California and Indian Wells, this week’s Sunday Serve will take one last look back at Melbourne 2022 and the Australian Open.

Well, what a beginning … Novak Djokovic set it all off days before the event started by arriving with the wrong visa and/or no proof of Covid vaccination.

Who was right and who was wrong is now largely irrelevant, because, after one appeal, he was sent back to immigration detention and eventually deported by Australia’s Immigration Minister Alex Hawke.

But not before another appeal, which was dismissed by a panel of three federal judges.

So as we began the event, Djokovic was on a plane home, accompanied by a three-year ban.

There was a ban of sorts on capacity crowds in Melbourne – a city that has endured the most draconian of covid lockdowns in any city in the world – but it didn’t stop fans returning and by the end of week were at 75 per cent capacity with great attendances for both the women’s and men’s finals.

But before that, there were a few other shocks:

“I didn’t play a lot of matches at the beginning of this year,” Kvitova said.

“I did have some health issues the whole month as well, so it was tough to practice.”

Then US Open finalist Leylah Fernandez went out to Aussie wildcard Maddison Inglis.

Casper Ruud rolled an ankle and quietly withdrew from the event as others, notably Barty, Kontaveit, Halep and Medvedev moved into later rounds.

Andy Murray got off to a good start, beating Georgian Nikoloz Basilashvili as another Brit, Emma Raducanu swept past Sloane Stephens.

Neither would survive the next round, with Raducanu suffering debilitating hand blisters and going down to Danka Kovinic as Murray was solidly beaten by Japanese qualifier Taro Daniel.

Afterwards Murray, who had looked positive a week before in Sydney, questioned his own tennis immortality. Was age eventually catching up with one of Britain’s greatest tennis stars?

Age wasn’t a factor for Raducanu – more a lack of professional preparation for the tournament. Didn’t someone in her camp point out the soft hands- blisters possibility weeks before? Having not played much tennis since winning the US Open, surely a good trainer and/or coach would have spotted that potential pitfall.

Ugo Humbert caused a stir as he isolated after testing positive for Covid as both Rafa and Ash moved ominously through the rounds.

For a tournament engulfed in Covid issues weeks before it began, it was refreshing that only a small handful of players actually succumbed to the virus as players, staff, the media and fans were subjected to daily tests.

Matteo Berrettini was looking good as well, as was Spanish teenager Carlos Alcaraz. They were destined to meet, with the Italian winning that one.

Wildcard Chris O’Connell shocked Argentinian Diego Schwartzman as Tennis Australia chief Craig Tiley emerged from his bunker to be booed by fans over his handling of the Djokovic affair.

He later went on TV to say he would not resign over the incident and the subsequent legal battle that shocked the nation and the world. Nadal’s eventual triumph may just have saved him his job.

At the end week one there was still plenty of top ranking players left to contest the finals – with Djokovic’s late draw replacement Miomir Kecmanovic unbelievably still in the competition.

Barty was at her brilliant best but Naomi Osaka was out. Osaka had made a welcome return to tennis after a short break with mental issues and looked OK in early rounds.

Not great, just OK, as some commentators put it, and on Day 5 she fell to American Amanda Anisimova, as Barty was dismantling Camilla Giorgi.

The Bromance of the two weeks was undoubtably the doubles pairing of Nick Kyrgios and Thanasi Kokkinakis as the Greek-Aussies went all the way.

They (or perhaps just Kyrgios) upset a few along the way with raucous fans and some ’out there’ claims, but it did put men’s doubles firmly on the map with local TV viewing figures the best ever.

And when Kyrgios claimed he had been threatened by a rival coach after the pair had beaten Croatian No.1 doubles seeds Nikola Mektić and Mate Pavić, the media went ballistic.

Jessica Pegula, arguably the richest of today’s crop of WTA stars, thanks to her parent’s massive wealth, killed off Maria Sakkari’s hopes of glory as Madison Keys showed that, despite little to offer from the men, women’s tennis in the USA has a bright future, with a solid win over Spaniard Paula Badosa.

Victoria Azarenka, who wowed the media by taking her young son to post match press conferences, saw her luck run out as she lost to French Open champion Barbora Krejcikova.

The Czech then lost out in the next round, but made up for the loss when she went on to win the women’s doubles with Katerina Siniakova.

Anisimova’s glory soon ended as well, beaten by Barty as Danielle Collins proved a formidable foe on her way to the final.

Fans were told to take off T-shirts supporting missing Chinese player Pen Shuai by overzealous security, only for Tennis Australia to ‘about turn’ the next day. Public pressure was led by a number of former players, Martina Navratilova among them, and come finals day the T-shirts were happily paraded.

Daniil Medvedev had a fantastic tournament, but looked distracted in a number of matches, copping over $12,000 in fines for abusing match officials. Everyone seemed to be blamed – not the sign of a true champion.

By Day 10 and 11 we pretty much knew how it was groin g to pan out with Collins, Swiatek Keys and Bart all there with Nadal, Medvedev, Tsitsipas and Aliassime representing the best of the men.

Barty swept past Keys and Collins won a thriller over Swiatek. Collins even sent a ‘bring it on’ message to Barty.

Nadal went toe to toe with Berrettini in another four set thriller to reach his 29th Grand Slam as Tsitsipas was again the subject of more courts controversy, accused of receiving coaching from his father in the stands.

That said, it was Medvedev who won the match, in four sets, as the Russian launched a vitriolic verbal attack after the final point with the pair barely able to to shake hands.

And so to those finals. Two magnificent finals, but for very different reasons.

Barty had to battle for the first time in Melbourne, and after winning the first set with ease, found herself 5-1 down in the second.

Did Barty step up when it mattered or did Collins freeze? We may never know.

But the Aussie champion fought back from that point to take the set and the match – as 12,000 fans went wild.

The most telling moment was probably about 30 minutes after the winning point though, when Evonne Goolagong Cawley, one of Australia’s most loved of players, made a surprise entry to present the winners’ trophy.

Could that be topped? You bet it could.

At two sets down most bets were on Daniil Medvedev to win the men’s title on Sunday evening.

Against an ageing superstar of the game the Russian looked in control. But Rafa Nadal is no quitter and once he has spotted a few chinks in the armour it was game on.

At 3-3 in there third set, the smart money was still on Medvedev. After Nadal had saved two break points to take the set, that money was moving, slowly. But moving.

When the pair began the fifth and deciding set close to midnight it was evens.

At 5-5, and after over five hours of play, Nadal broke through to win what many believe to be the biggest comeback in tennis history.

Even Medvedev said afterwards he tried everything.

“In the fifth set, I was making him run. He was unreal.”

Unreal was an understatement as Melbourne wound up for another year,

A year of so many contrasts – of controversies, of upsets and of amazing triumphs.

Winners and losers? Of course – but we all went home a winner.