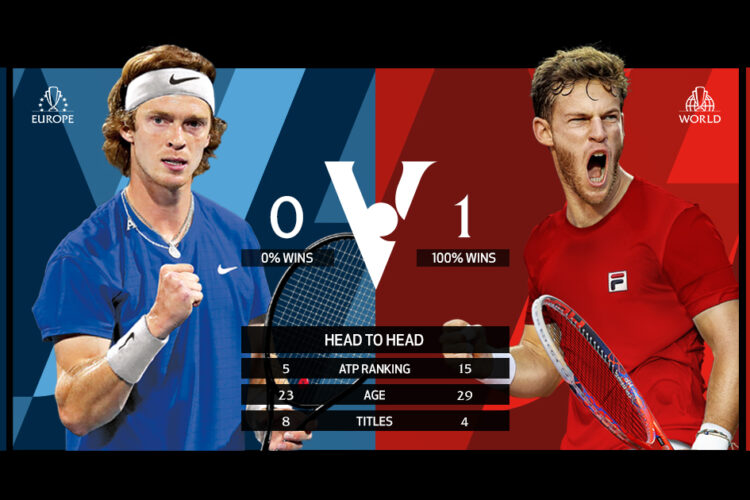 Andrey Rublev has only met Diego Schwartzman once before – back in 2017, and he won that encounter, a five-set classic at Roland Garros.

Both are big baseline hitters with Rublev probably the slight favourite.

That said, don’t write off Schwartzman. He made the quarterfinals at Roland Garros in June and is solid on hard court.

“I think the conditions are good for me,” he said. “The court is slow this year. I felt great these few practices so far. Rublev has big shots. He’s playing very fast, but under these conditions I have a few opportunities to keep rolling on the points.”

The Team World pairing of John Isner and Canadian Denis Shapovalov will have their hands full, against Zverev and Berrettini on the doubles court.

For Isner, he is hoping the local crowd will help. “I just like the team atmosphere. I think all of us do,” he said.

“I played four years of college tennis. I played a lot of Davis Cup. It’s special when you play for more than just yourself. Everyone would agree with that assessment. To get to play in atmospheres like this; in Prague, Chicago, Geneva, where the buildings were just absolutely electric. It makes you play really well, gives you a lot of adrenaline.”

Isner is a Laver Cup veteran and knows hoe to move around a doubles court. Will he and the young whizz kid from Canada have enough to see off Europe’s two big guns?