Europe must now rely on singles victories from Roger Federer and Alexander Zverev if it is to win a third straight Laver Cup after Dominic Thiem was handed a 7-5, 6-7(3), 10-5 defeat on Sunday.

The final day at the third edition of the Europe v World showpiece in Geneva will go down to the wire, with Federer needing victory over John Isner whIle Zverev must beat Milos Raonic.

Thiem went down to American substitute Taylor Fritz as World increased its lead to 11-7 after seizing it for the first time through an earlier doubles win. The first side to 13 points wins the weekend.

Fritz was thrown into the mix after teammate Nick Kyrgios said he would be unfit to play.

“This is such a big win for Team World,” Fritz said. “We really needed that. We need one more match win, it’s crucial.”

The No, 30 who lost on Friday to Stefanos Tsitsipas, was pleased to make amends.

“To let the team down on the first day and come back today and contribute just means everything.

“I felt good this morning, two hours before Nick came to me and said he not feeling great and I might have to hop in there. – I was ready to go.”

Fritz called victory “one of the biggest wins of my career. it means so much to do it when you’re playing for other people.”

Federer had originally been set to re-up with Rafael Nadal in an all-star combination from a year ago in Chicago.

But the Spaniard who won the US Open this month was forced to live out the day’s drama on the sidelines after a hand inflammation injury flared up.

Europe have won both previous editions of the Federer-insipred Laver Cup, but now faces a must-win situation with victories on the final day yielding three points apiece.

Only victories in both remaining singles rubber will assure the team coached by Bjorn Borg the chance to make it three straight.trophies.

“It feels great, the energy’s amazing and we’ve got a lead,” said World captain John McEnroe.

The Europe side was dealt an injury blow on Sunday as Rafael Nadal withdrew prior to the start of final-day play with a hand injury.

The 19-time Grand Slam winner who is fresh of a fourth US Open title this month, made the call after consulting with onsite medical staff in Geneva at the third edition of the Europe v World event.

Europe lead the World 7-5 going into the final day’s play.

“I’ve had an amazing time playing here at the Laver Cup and I’m so disappointed I’m not able to play again today,”  Nadal said in a statement.

“The atmosphere has been amazing here in Geneva and of course I’m going to be there courtside today for all my teammates and do everything I can to support them and help Team Europe win the Laver Cup.”

Nadal was to have played a vital role in wrap-up proceedings: Europe captain Bjorn Borg had lined up the Spaniard alongside Roger Federer for opening doubles..

With victories each counting for three points on the day, each rubber is critical if Europe are to claim a possible third victory in the competition after winning in Prague, 2017 and in Chicago a year ago.

Nadal was also to have also played singles against Nick Kyrgios, who lost in three sets on Saturday to Federer.

Borg will substitute Stefanos Tsitsipas into doubles with Federer while Dominic Thiem will replace Nadal in the singles with Australian Kyrgios.

In other matches which will decide the title at the third edition of the Cup, Federer will play singles against John Isner while German Alexander Zverev will play the concluding rubber against Canadian Milos Raonoic.

The fact that Sock and Kyrgios had played together before was abundantly clear as they took the first set 6-4. 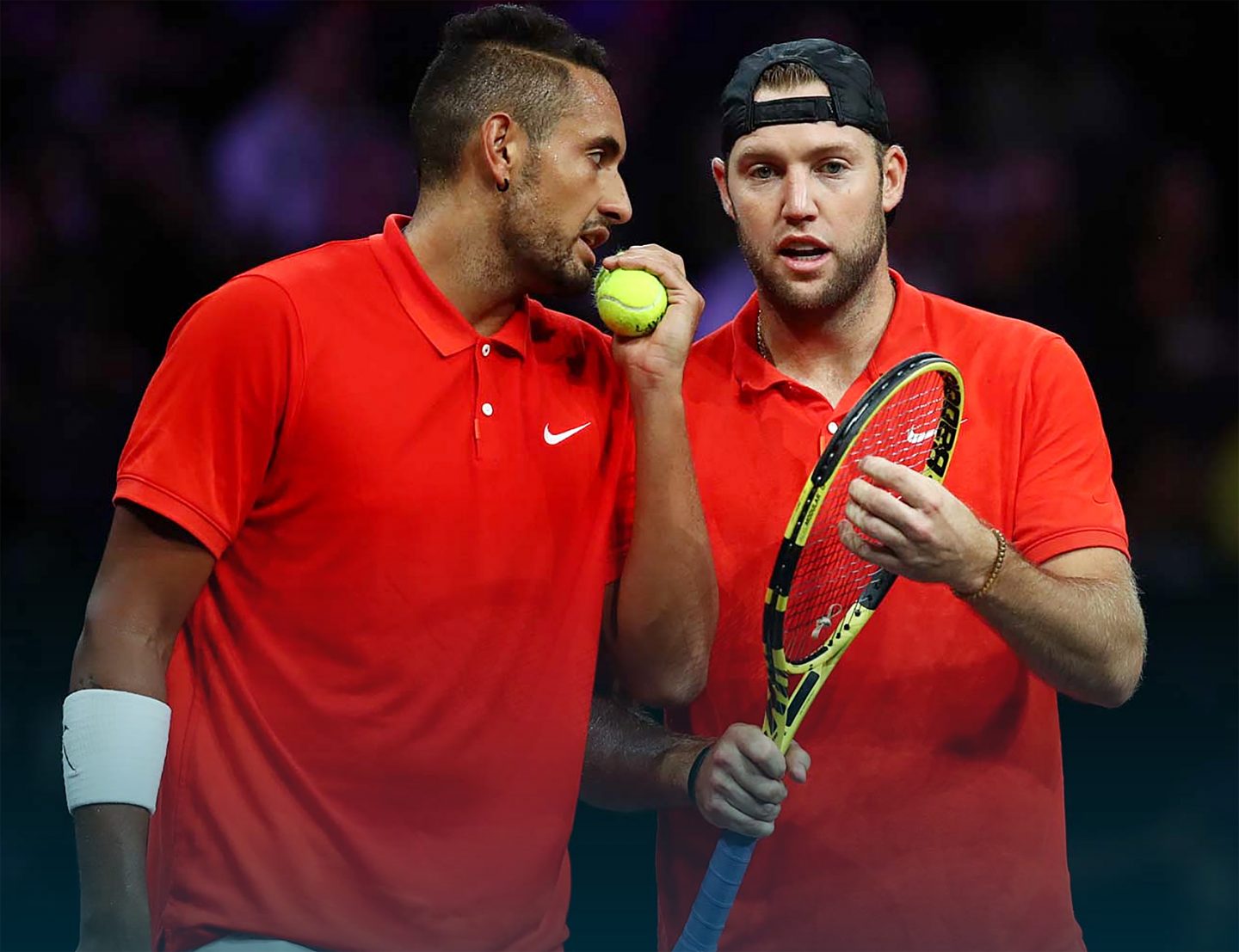 Nadal and Tsitsipas played a much better second set taking it 6-3.

At one changeover the entire Europe team were it fits of laughter when Nadal told Tstitsipas that he had “no idea what his hand signals meant”  and the lack of co-ordination showed in the decisive tiebreak with Sock and Kyrgios taking control to come out on top 10-6.

With four matches worth three points each  to come on at Sunday’s showdown at Geneva’s Palexpo Arena, the outcome is still wide open

After “stealing” the first set 6-3 off Milos Raonic, US Open champion Rafa Nadal confessed to “coach” Roger Federer “that was the most undeserving set ever won”

The debutant Canadian had been made to pay heavily for missing eight break point opportunities on Rafa’s first three service games.

“When you see a chance to come to the net, challenge him for a passing shot. You’re so good at the net, Use spin, slice… you know, just like in the old days!”

Rafa heeded the lesson and was soon back in the zone, breaking back in the next game with a deft drop shot followed by a stunning backhand volley. 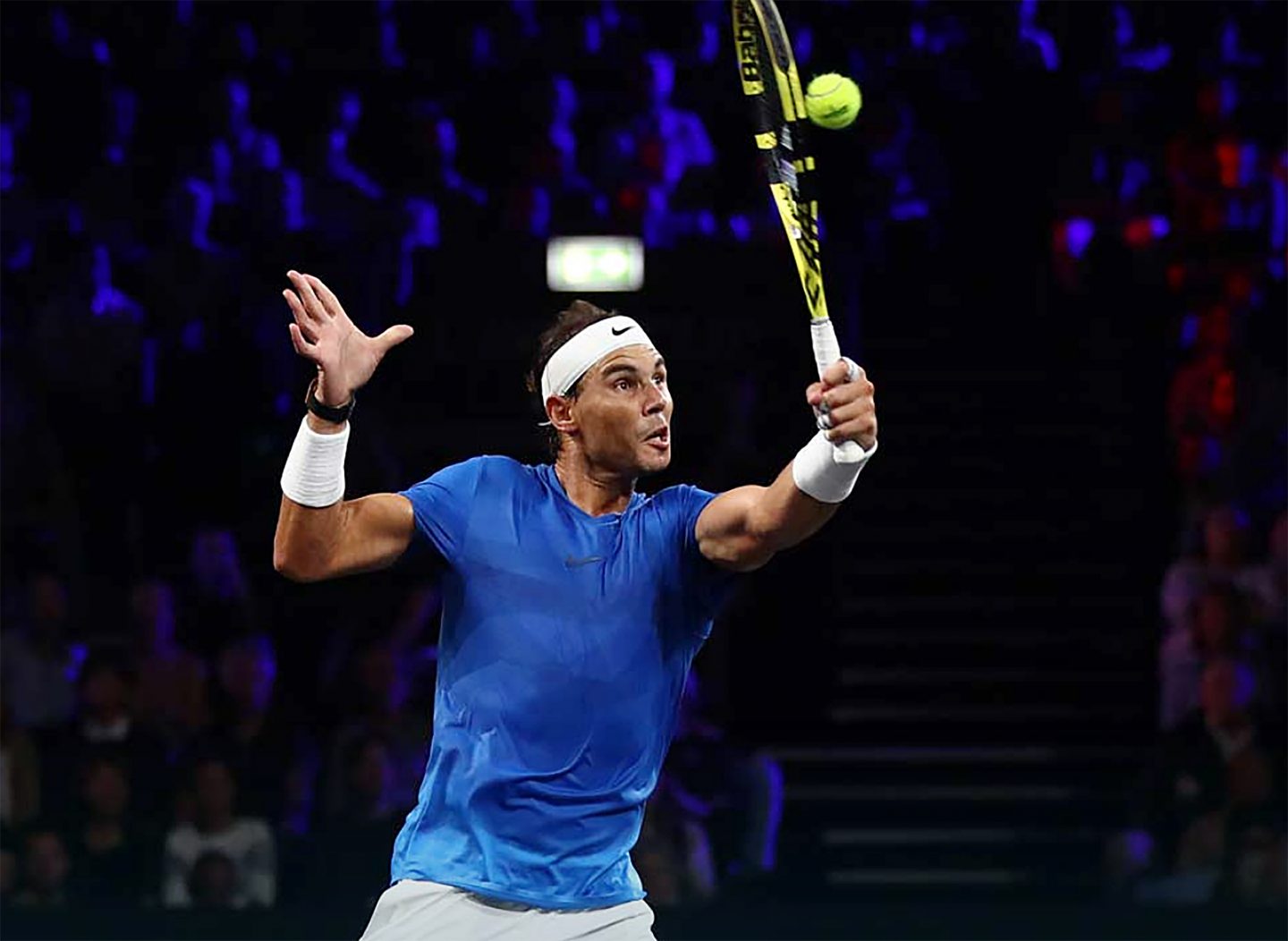 A tie-break followed and Spaniard immediately unleashed a tirade of volleys and raced into a 6-0 lead, leaping in the air like a gazelle in celebration, just like the Rafa of old.

After just over two hours Nadal hit the final winner, taking him to an eleven match winning streak, and a 7-3 match lead for Team Europe.

“Being here for me is a very positive energy. I like being around such a great team and the crowd is amazing,”  Nadal said afterwards.

“I feel very lucky [to win] the first set. I started to play better later in the match and I think I played a very good tie-break in the end.”

Roger Federer played to the home crowd while teammate and “coach” Rafael Nadal stayed in his ear as the Swiss legend beat Nick Kyrgios 6-7(5), 7-5, 10-7 on Saturday at the Laver Cup.
The Geneva victory in front of 17,000 in just over 90 minutes gives Team Europe a 5-3 lead in the three-day series; point values for wins increase to two on the second day with three points earned for victory on concluding Day 3.
Federer credited the Swiss crowd with helping him to a comeback.

“I was hoping that it would be like this, the  crowd didn’t disappoint, it was amazing,” he said.

“I had a bit of a lull in the second set; losing the first was tough as it was so close.
“I needed some energy to get going, NIck was playing very well. I tried to remain focussed and stay with him.

“it was look like you are down, but the momentum can turn fast if the crowd gets into it. They really pushed me over the line today.”

Federer’s victory gives some important breathing space to Europe after World’s John Isner surprised Alexander Zverev 6-7(2), 6-4, 10-1 in the day’s opening singles.
Nadal was making his singles start later against Milos Raonic of the World side.
The Spaniard was playing an active role even without being on court during the Federer, match, giving his fellow icon frequent strategy advice in the tight contest with Kyrgios.
https://www.youtube.com/watch?v=vc7FZ2XzPn0
Victory for Federer marked his third over his Australian opponent in Laver Cup play, with the Swiss also beating Kyrgios in Prague 2017 and Chicago a year ago.
On the ATP. Federer stands 4-1 in the series, with his only loss coming in Madrid, 2015.
Federer pulled back from a deficit twice, breaking for 6-5 in the second set before levelling at a set each moments later.
The 20-time Grand Slam champion also trailed 0-2 in the tiebreak third set, with Kyrgios saving a pair of match points before finally going down on a forehand wide.
https://www.youtube.com/watch?v=4uwGRsN6oM4
In the day’s first match, Isner’s victory kept World from falling to a 5-1 deficit as the side which has lost both previous Laver editions struggles to avoid a hat-trick of defeats in the team event.,
“Maybe we’re turning the tables just a little bit,” said Isner. “Team World is in this and we’re here to win, so let’s get it going!”
The winner admitted: “I wasn’t making any inroads on his serve at all and he was the better player for 85 per cent of that match.”
Zverev looked to be on fire as he won the opening set but was pegged back by the treetop-tall American in the second; Isner then ran away with the third-set tiebreaker to secure the win.
Post Views: 112
Tweet
Pin
Share
0 Shares

Jack Sock, who won his last singles match in March and has played just five more times at the ATP level …