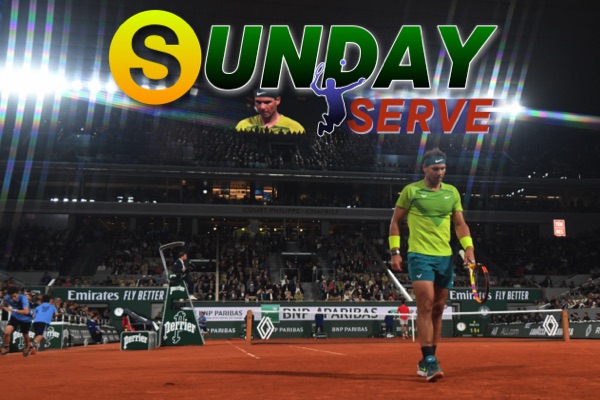 But despite the cold, night sessions are here to stay.

“Night sessions will stay, but obviously we are going to see whether we move the starting time or not,” tournament director Amelie Mauresmo said.

Nadal’s win over Djokovic was one of 10 matches scheduled at 9pm at this year’s French Open under an agreement with broadcaster Amazon Prime Video.

Nadal had wanted to play in the daytime and repeated his opposition to taking part in clay court tennis after dark.

“It is too late, without a doubt,” Nadal said.

“I understand the other part of the business, without a doubt, that television pays a lot of money but we need to find a balance.”

“TV decides. That’s the world we are living in. Broadcasters say it’s going to be night match, day match. They give the money. They decide.”

Mauresmo risked accusations of sexism during the week by claiming only one of the 10 night sessions had a women’s match because men’s tennis has more “appeal”.

The new floodlights on Court Philippe-Chatrier have seen night sessions for the first time at the event as organisers sold the rights to Prime.

Of the 10 night sessions only one featured a women’s match, the second round clash between local favourite Alize Cornet and former champion Jelena Ostapenka.

Mauresmo later apologised saying her comments were taken out context.

“And I want to say sorry to the players that really felt bad about what I said.”

COCO Gauff said she wanted to use her platform to call for the end of gun violence in the US and urged for gun reform.

Gauff, 18, wrote “Peace End Gun Violence” with a picture of a heart on the TV camera after her straight sets victory against Italy’s Martina Trevisan.

“I think that this is a problem in other parts of the world, but especially in America, it’s a problem that’s, frankly, been happening over some years, but obviously now it’s getting more attention. But for me, it’s been an issue for years,” she said.

Gauff also complained about the ‘grunting’ of Trevisan during their semifinal match.

“I normally don’t care but when I’m hitting it she is still screaming,” Gauff said.

Umpire Marijana Veljovic agreed and had a few words.

Eurosport commentator Simon Reed added that “the length of the noise that Trevisan is making” found itself “halfway between a grunt and a scream.”

AN environmental idiot wearing a T-shirt with the message “We have 1028 days left” interrupted the French Open men’s semifinal between Casper Ruud and Marin Cilic by attaching herself to the net with metal wires and glue and kneeling on the court on Friday.

“The young woman, of French nationality, entered the grounds with a valid ticket early in the day,” the French Tennis Federation said in a statement.

“The security team needed to formally identify the objects she used to get onto the court before they could remove her,” the federation said, adding that she was “handed over to the police.”

“I didn’t really know how to react to it, and … I didn’t know if she was holding anything,” Ruud said. “I didn’t get to see too much. So it was a little bit (of a) tricky and difficult situation. Never happened to me before.”

NOVAK Djokovic’s failure to make the semifinals at Roland Garros will see him lose the top spot in the ATP rankings tomorrow.

Djokovic was defending 2000 points in Paris, but will be the third ranked on the list, behind Russian Daniil Medvedev and German Alexander Zverev, if he recovers from the ankle injury he suffered in the semifinal against Rafa Nadal.

Zverev said the injury was “very serious”, so we doubt he will be at SW19.

The German left the court in a wheelchair and returned on crutches to confirm to the umpire that he could not continue.

The ATP rankings and seedings for Wimbledon will have a few pundits scratching their heads next week, as Novak Djokovic drops down the list, no Russian and Belarusian, and the fact that no points will be on offer at SW19, and we were left with the possibility that Alexander Zverev (injury permitting) would be top seed on grass.

And … French Open points will only come into full effect on June 13 as last year’s tournament started a week later than normal.

Zverev is certain to climb to at least No.3 in the rankings, but according to journalist Jose Morgado, Rafa Nadal, despite winning the Australian Open and reaching another Roland Garros final, could only be ranked as high No.3. And that’s if he decides to play Wimbledon, as rumours swirl that he, and many others, will skip London as there are no ranking points available.

Rumours also continue to form that a “deal” between the ATP and WTA and Wimbledon will allow some form of points for the event. Watch this space.

And let’s not forget the longer view… no one has yet to answer the question if the Wimbledon winner will still get into ATP Finals in Turin if they finish in the Top 20?

SPORTS doctor Brian Sutterer believes Alexander Zverev’s injury may not require surgery after all, as many have predicted.

“What this looks like is a standard inversion, or lateral ankle sprain,” he said. “This is the traditional low ankle sprain mechanism.”

If the injury is just a ligament tear, then surgery may not be needed.

“The ATFL ligament is the most commonly torn with an ankle sprain.

“Everything about this injury …. fits with the traditional low ankle sprain, likely involving that ATFL ligament.”

SPANISH teenager Carlos Alcaraz believes he is “not far away” from winning a Slam after falling at the quarter-final stage last week.

“I have to take the lessons [from] today,” Alcaraz said after the defeat. “It was a tough match and close match.

“I could say I didn’t start well, and in this level, quarter-final of a Grand Slam, you are playing against the best players in the world, so you have to start the match better than I did today.

“I have to improve for the next Grand Slam or next matches. But I would say I’m not far away from reaching a semi-final or being able to win a Grand Slam.

“I would say I have the level, I have the confidence to win a Grand Slam or reach the semi-finals next time.

“I leave the court and leave the tournament with the head very high.

JOHN McEnroe was not happy with Rafa Nadal’s tactics in beating Novak Djokovic in their quarterfinal clash.

McEnroe slammed Nadal for time wasting, saying on TV he should have penalised by the umpire.

“He should be penalised. If you are going to do it, do it, otherwise don’t bother. It is like humouring everyone.

“Or don’t bother. It’s like, you can take as much time as you want on the second serve. How long is this game? 12 minutes? Jeez.”

Never one to shy away from controversy is old Big Mouth!

WAS Holger Rune the centre of attention at Roland Garros or was it sister Alma?

Alma, a model, watched her brother from the stands.

TV cameras caught a glimpse of her as Twitter fans accused media of obsessing over her.

Alma has a following of almost 20,000 users on Instagram.

AND finally … Iga Swiatek says she has “no expectations” for Wimbledon after extending her winning streak to 35 matches.

“But honestly, grass is always tricky. I actually like the part that I have no expectations there. It’s something kind of refreshing.”

For the record: Swiatek equaled Venus Williams’ run of 35 straight wins in 2000 for the longest winning streak by a woman this century.

And it took her past Serena Williams’ longest unbeaten run of 34 matches.