An under-done Roger Federer could not overcome the ravages of 76 unforced errors as the Swiss was denied the chance to keep up his bid for a sixth US Open title on Monday in a post-midnight shock loss to Australian John Millman. 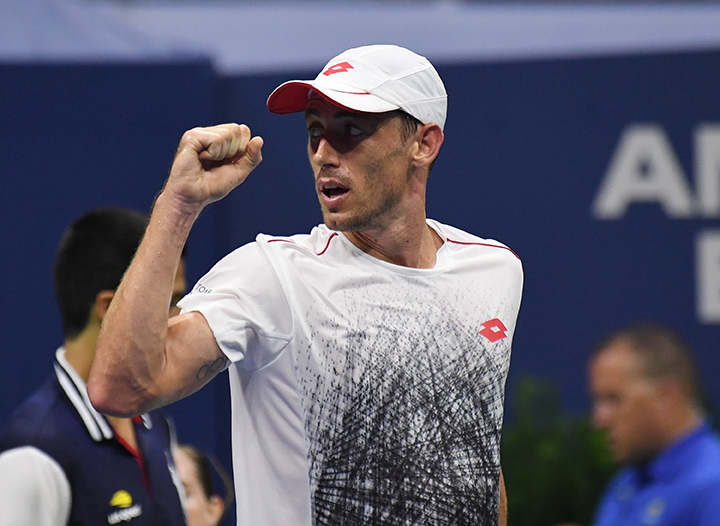 It was the earliest Flushing Meadows loss for the 37-year-old world No. 2 here since 2003, the year before he won five titles on the trot.

Federer lost for the first time in New York to a player ranked outside the top 50 after beating his first 40  in that category.

“I have so much respect for Roger and everything he’s done for the game and he’s been a hero of mine and today he was definitely not at his best but, you know, I’ll take it,” Millman said.

Federer saved two match points  in the desperation fourth-set tiebreaker before making his exit a decade after winning his last trophy at Flushing Meadows.

He had been aiming for a 400th match win at the Grand Slams. 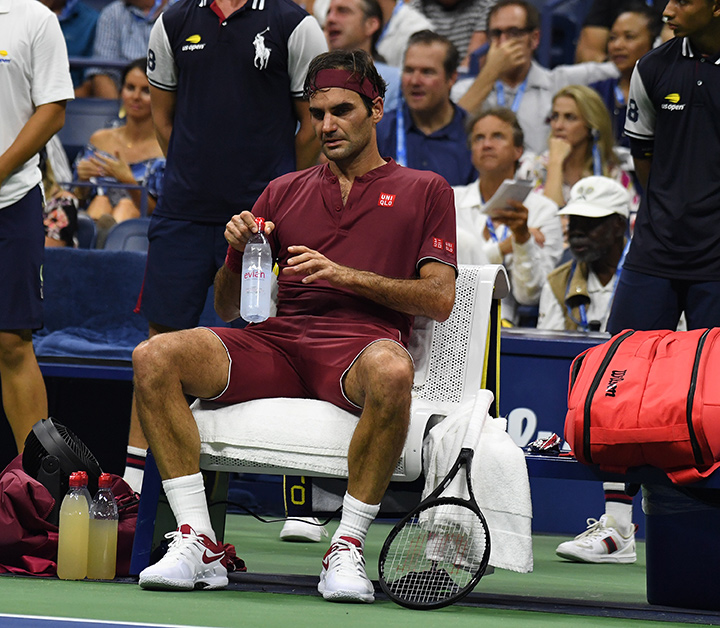 The marathon lasted for more than three and a half  hours, with Federer playing uncharacteristically error-prone as it wrapped up just before 1 a,m,

Federer missed most of his major chances, including a pair of set points which would have given him a two-set-to-love lead. 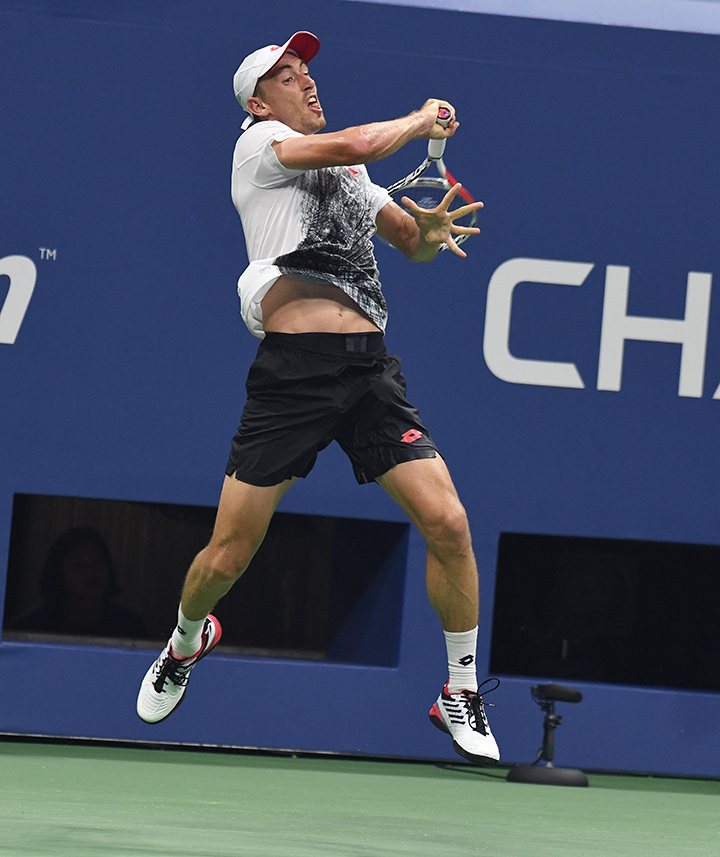 Millman’s first major upset win – his first over a top 10 player – came after a serious of injuries which have slowed his career progress.

Federer came to the match with three straight-set wins in his pocket, including a defeat 48 hours earlier of Aussie Nick Kyrgios.

The second seed had reached s12 of the past 13 Open quarter-finals, losing only in 2013 to Spain’s Tommy Robredo.

Millman came good in his first fourth round at a major whiel playing his first Ashe night match, the home for Federer at the venue. 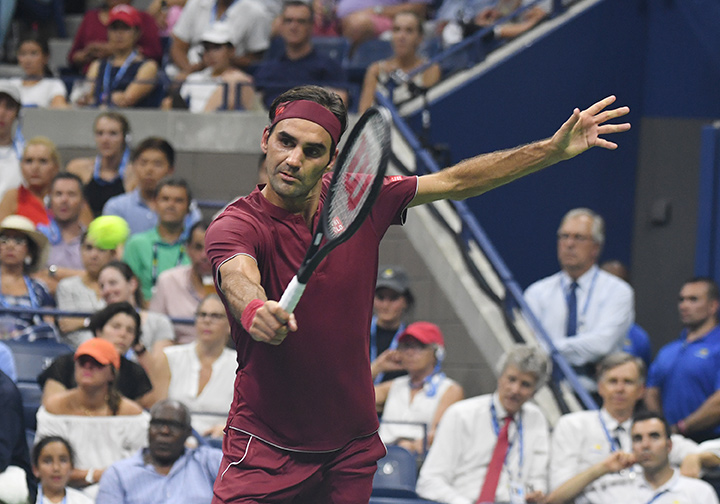 Federer charged through the opening set in 33 minutes but immediately began losing momentum, with Millman coming back from a second-set break before saving a pair of Federer set points.

The Swiss found himself level-pegging at a set each and was never able to regain his best form after losing his first set of the tournament.

Millman consolidated by winning the third set and came back from a 4-2 defict in the third, immediately re-breaking the fading Federer. 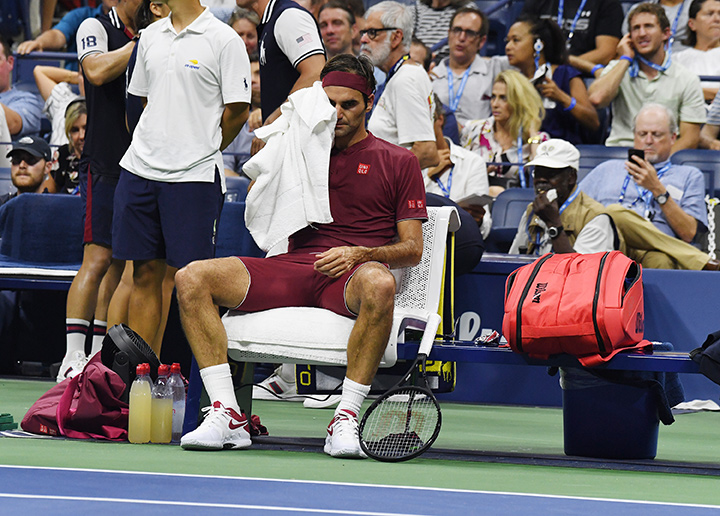 The fourth went into a tiebreaker, with Millman icing the landmark victory of his career after Federer saved two match points.

Millman will next take on two-time champion Novak Djokovic.

The sixth seed almost bowed to torrid afternoon heatstroke conditions, taking treatment on court in what mounted to a full medical intervention before sweating out a 6-3, 6-4, 6-3 win over Joao Sousa of Portugal. 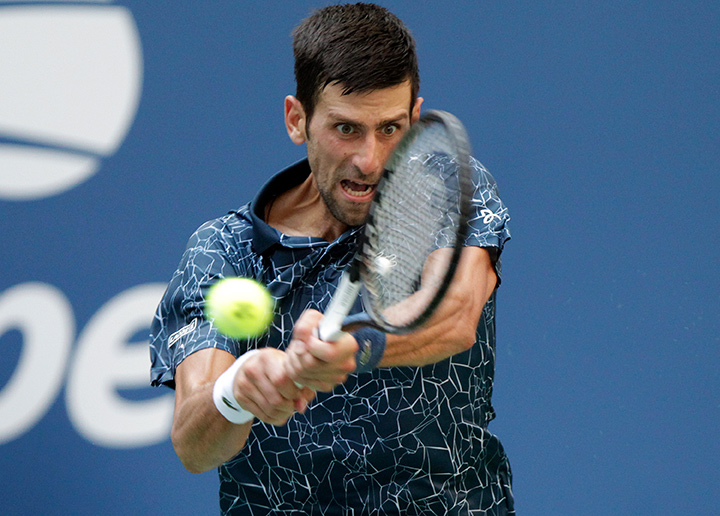 The 13-time Grand Slam champion Serb struggled to finish at the two-hour mark, breaking Sousa for 5-3 with an overhead and serving out the draining win a game later on his second match point.

“I was very happy to get this one done in three,” the winner said. “It was much more difficult than the score.

“Credit to Joao for fighting, he brought intensity to the court.”

“It was really hot for the fist hour and a quarter and cooled down a bit later. It was a tough one to play.” 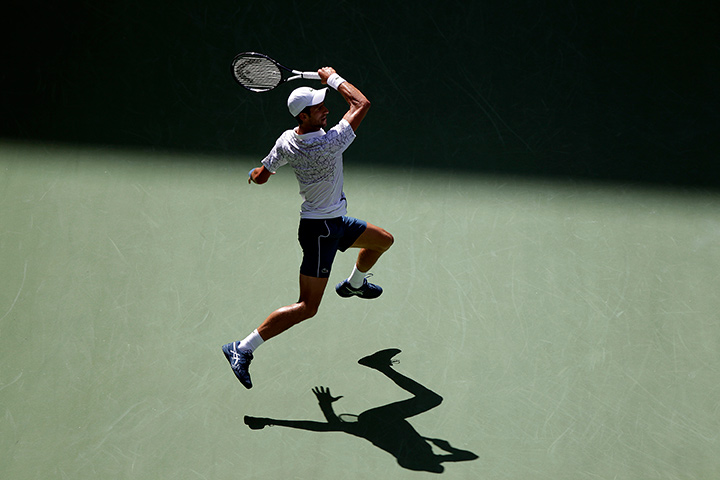 Djokovic refused to make any excuses about playing all-out in the heat. “We are just trying to cherish the moments in our careers,” he said. “But I know I’m not 21 any more – that was 10 years ago.

“I don’t feel old, but there is a biological clock ticking and it’s not working in our favour.

“I was just trying to survive out there.” 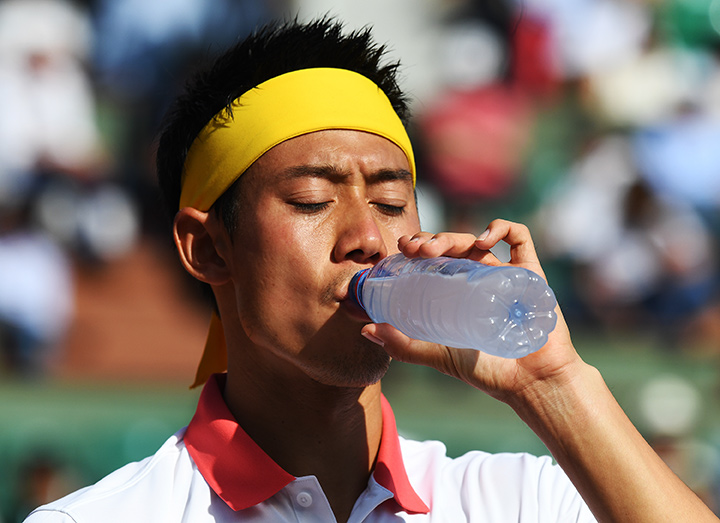 2014 finalist Kei Nishikori kept working to re-live the past with his 6-3 6-2 7-5 defeat of German Philipp Kohlschreiber at the US Open.

For years ago, the Asian played for the title here against Marin Cilic; he returned  as a semi-finalist two years later.

Nishikori had it all in his favour in the early stages before Kohlschreiber, – a winner in the previous round over fourth seed Alexander Zverev – rallied briefly with a break for 5-all in the third.

But Nishikori pulled away to earn the straight-sets victory and move to 3-0 in the series.

“(I was) really lucky to finish in three sets — it was really hot on the court,” the winner said. “We both struggled a little bit with the heat.”

Nishikori is returning to form after a year of struggles with wrist injuries.

The former Top 10 player has been recovering his ranking after falling to 39th after three years in the Top 10.

“We were both struggling a little bit with the heat,” Nishikori said after playing for two and a quarter hours. 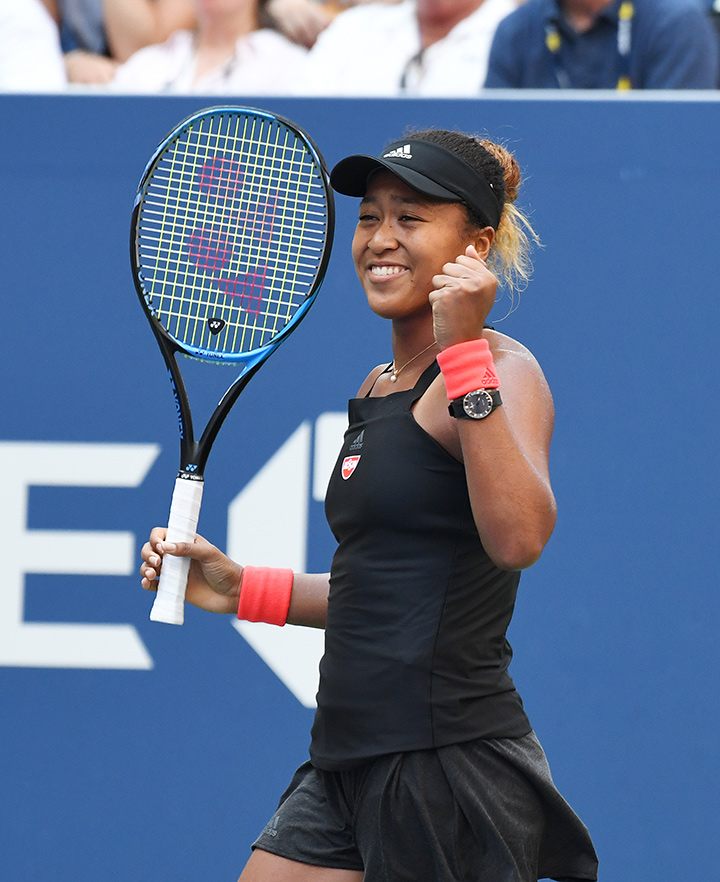 The 28-year-old was joined in the quarter-finals by female countrywoman Naomi Osaka, marking the first time a Japanese pair had done this well at a major since Kimiko Date and Shuzo Matsuoka in 1995 Wimbledon.

“I don’t expect any big result, I try to play one match at a time,” Nishikori said. ” This week it’s been great. 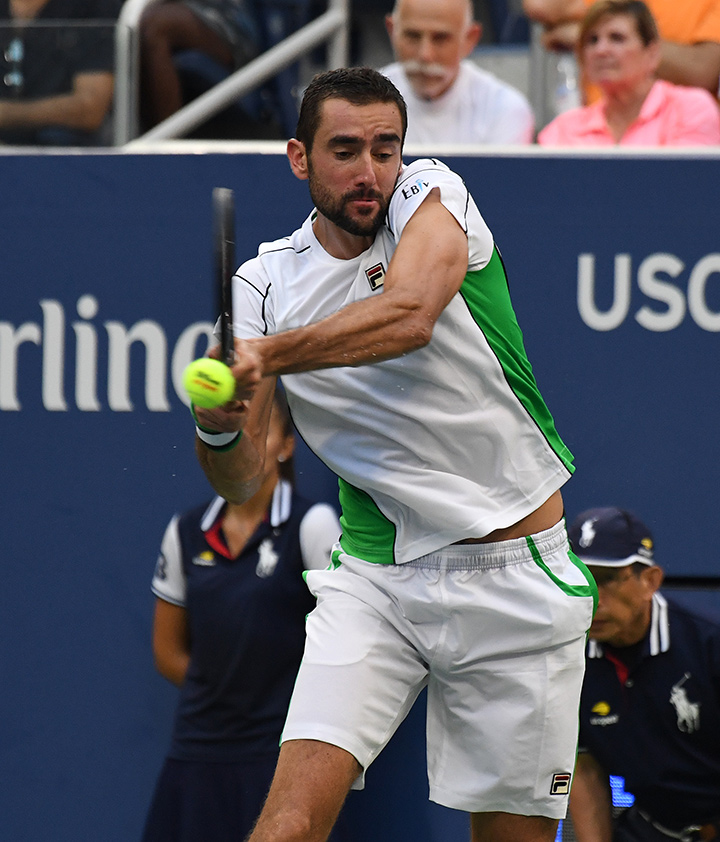 The Asian ace will play for the semi-finals against 2014 titleholder Marin Cilic, who knocked out Belgian seventh seed David Goffin 7-6(6), 6-2, 6-4. 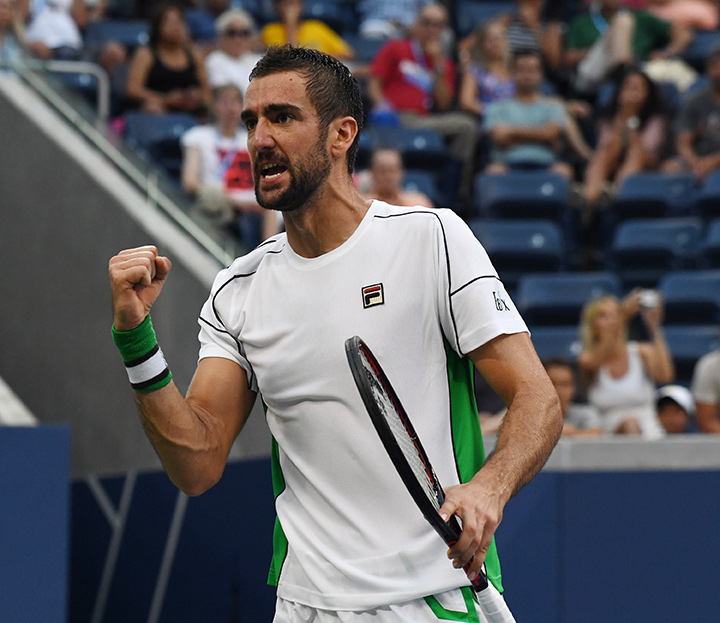 Cilic was fresh after finishing at 2 a.m.  at the weekend in his previous round; his win kept Goffin from becoming the first from his county to reach the New York quarters.