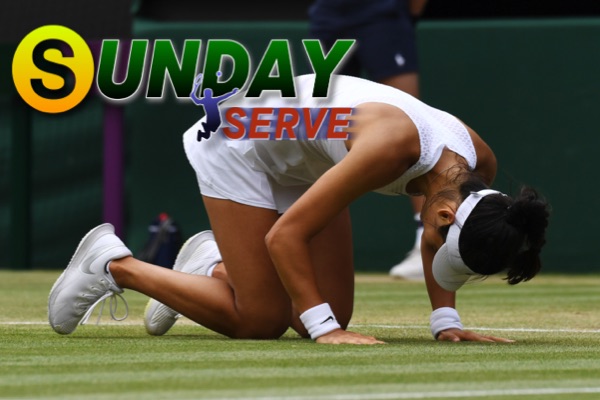 IS Emma Raducanu in the last chance coaching saloon after sacking another mentor this week?

Raducanu (or is it dad Ian) has a reputation for being hard-headed about who coaches her, but the truth is that since her US Open triumph last year, she has not won a single tournament.

In fact early round defeats are now more common and what some critics might call excuses over blisters, are beginning to become the norm.

To be blunt, a world ranked tennis player, with a Slam title, should not be losing matches because of soft hands.

Poor preparation, too much emphasis on media or commercial deals? Who knows, but the tennis world is now beginning to wonder if her New York triumph was in fact just a one-off.

Raducanu is poised to appoint Riccardo Piatti as her new coach, the 63-year-old described as the ideal next step.

His technical know-how is unrivalled, and he has worked with precocious talent before – Maria Sharapova.

Will that be enough to convince the Raducanu family, where dad Ian is a big voice?

Someone described to the London Telegraph last year the Raducanu’s “start from the principle that most people don’t actually know what they are talking about”.

And that same person then said: “They size you up, work out what you’re good at, suck out all the information they can get from you, and move on.”

Dad still, we are led to believe, still prefers to bring in ‘consultants’ for specific set terms to fix this or that.

Can Piatti fix the next step in her tennis education, or are we to see more revolving doors before she returns to face adoring fans at Wimbledon in a few months?

Stability is what is needed right now – and a longterm partnership.

CHRIS Evert was surprised to see another coaching change in Raducanu camp, so early into the new season.

She tweeted: “I was sorry to hear about the @EmmaRaducanu @TorbenBeltz split.

“She was playing well and looked great against Iga last week. He is an accomplished coach and a great guy…the surprises keep coming!”

Raducanu achieved her best result of the year last week in Stuttgart, winning back-to-back matches as she reached the Stuttgart quarterfinal before losing to world No. 1 Iga Swiatek.

ROGER Federer’s comeback is on track as he confirmed this week he will play the ATP 500 Swiss Indoors in Basel in October.

Federer, 40, has not played since Wimbledon last year, and has struggled with knee surgery since the 2020 Australian Open.

He is also expected to play the Laver Cup at the O2 in London in September.

RAFA Nadal is to open a tennis academy in Hong Kong – a fourth – following successful ventures in Mallorca, Greece and Mexico.
“We are very excited about this new international project in Hong Kong,” Nadal said.

“Since the opening of the academy in Mallorca five years ago, we have always found it very interesting to be able to expand our methodology to more countries in order to reach as many people as possible.

“I am convinced that it will be a success and that little by little we can continue to increase our international expansion.”

SPORTS media around the world, has questioned the decision of Wimbledon this week to allow an unvaccinated Novak Djokovic to play at this year’s event, while banning Russian and Belarusian players.

“They’re now stooping to a new low for the standard of Wimbledon entry, as rankings clearly aren’t the best determination anymore,” wrote Eric Blum on the Deadpan sports website.

“Some of the vaccinated players who’ve spoken out against Russia’s needless invasion of Ukraine can’t play because of their specific nationality? Djokovic enters the draw as the tournament favourite despite being boastful about not taking the vaccine? How on Earth does that make sense?”

“The requirement set out by the government to enter the UK does not include mandatory vaccination,” All England Lawn Tennis Club chief executive Sally Bolton said.

“Therefore, while it is of course encouraged, it is not a condition of entry.”

“We absolutely acknowledge that others will have different views about the decision we have taken, Bolton added.

“But in the context of the government guidance … we really believe it was the only viable option we could take.”

COACH Patrick Mouratoglou has joined the opposition to the Wimbledon player ban, saying players from the nations have done enough to prove they oppose the war in Ukraine.

“Banning Russian and Belarusian players from playing at Wimbledon is a very shocking decision for me,” he told Tennis Majors.

“Leave the politics to the politicians. Of course, there is a war. Everyone is against the war, including players from Russia and Belarus.

“They don’t literally say it, but they say it. So I think that is the most they can do without taking any risks, too much risk for their own families.”

ANDREY Rublev has revealed Wimbledon held a conference phone call with some Russian players to discuss their decision but said he thought the tournament’s reasoning made no sense.

“To be honest, the reasons that they gave for the ban … there is no sense,” he said.

Proposing an alternate solution, the 24-year-old said: “What Wimbledon has proposed, I hope they reflect on it and at least give us the chance to choose to play or not. If we had to sign a declaration to give all our prize money to humanitarian causes, it would be around €1m. In this way, they would take all the glory and respect.”

The WTA will not return to China this year as the organisation works to find a resolution to the Peng Shuai issue.

The WTA is still insisting on a transparent inquiry into Shuai’s claims of sexual assault.

“We are not about walking away from China. We have suspended our operations there right now. We will continue to do that until we get to a resolution.”

Boris Becker will lose lucrative contracts with TV networks around the world, including his job as a BBC pundit at Wimbledon, after being jailed on Friday in London.

It was SW19 (Wimbledon) to SW18 (Wandsworth prison) for Becker on Friday as he began a two-and-a-half year sentence for bankruptcy fraud.

He will serve about half that – one year and three months and most, probably at an open prison for what is termed non-violent ‘light’ offences.

Becker was seen in London on Thursday having what the media portrayed as a ‘farewell’ lunch with his partner Lilian De Carvalho Monteiro and their son after a meeting with a TV documentary company.

Friend and tennis co-commentator Andrew Castle was shocked by the news.

‘If you don’t pay your creditors, you pay the price,” Castle said.

“It’s the second time this had happened after what happened in Germany back in 2002. I thought this was a possibility, but I’m surprised and deeply shocked that I won’t be working with him at Wimbledon this year and that he’s going to go to prison. And I feel sorry for Lilian as well.’

German media reacted to Boris Becker’s jail term by taking aim at the judge in the hearing for ‘keeping everyone waiting for 30 minutes’.

Bild said there was ‘no mercy’ shown by the judge and Bunte branded her ‘merciless’.

The newspaper also said Becker’s downfall according to his his biographer, Christian Schommers, was his genorosity.

Mr Schommers said: ‘He has always been a very generous person when it comes to his wives. But then love became his financial fate: this generosity is now flying around his ears.’