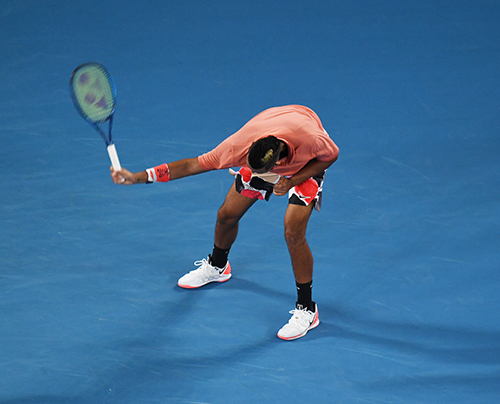 Ahead of his first tennis match for over a year outspoken Nick Kyrgios claims he has not missed the game, or most of his fellow professionals.

Kyrgios added that he did not even touch a tennis racket for the first four to five months of lockdown as he just wanted to get away from the game for a while.

The fiery Aussie recently confessed he had been in a “lonely, dark place” for several years battling depression bought on by the relentless grind of the tennis tour.

The temperamental star is one of the sport’s biggest crowd pullers but has also received intense criticism for his explosive antics on court, with a long list of transgressions to his name.

He will face Alexandre Muller of France in the first round of the Murray River Open on Monday, a warm up event for the Australian Open which starts on 8 February.

“I’m not going to lie. I didn’t miss the game that much,” Kyrgios said on Saturday.

“I’m a competitor. I compete with everything I do. I was playing computer games, that kind of stuff, getting my little competitive edge there. I didn’t really miss the game at all.”

“I don’t miss too many people on tour to be honest, apart from all the Australian guys and a couple of good friends.”

Kyrgios said he was lucky to have spent a “crazy year” with his family and friends before resuming training with compatriot Jordan Thompson.

“I feel like I am playing well and am ready to go. Everyone is really playing it by ear. Nobody really knows who is in form and who is not.

“I’m going to take it day by day and try to enjoy myself as much as I can.”