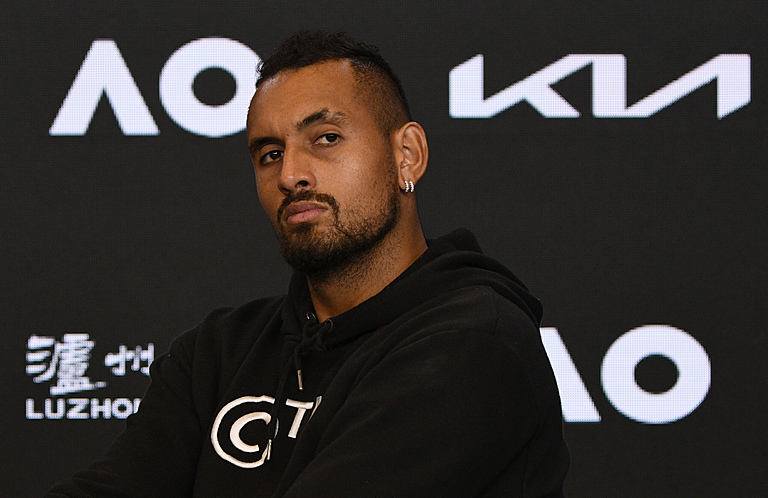 Nick Kyrgios has performed an agile flip-flop as the outspoken Australian Open coming out in support of anti-vaxx Novak Djokovic as the Serb fights deportation over his failure to be jabbed.

Over the past several seasons, the pair have gone at it on social media in a feud which now seems over due to the COVID controversy.

With the majority of other top ATP players at least casting some doubt on the motives of the world No. 1 who has twice had his visa cancelled this week and now faces a federal tribunal in a rare Sunday  morning hearing ,Kyrgios remains defiantly different.

“It’s just a s***show,” the player quarantined by a positive COVID test said.

“I’m waking up and it’s just reading the media and there’s something new every day. I feel like we’re just trying to fight things that aren’t right.

“It’s not about the vaccination any more, it’s just about him not being here on the right visa or his visa being cancelled.

““I feel a bit embarrassed. it’s s***. You can’t feel proud to be Australian during this time. Surely not, you’re just not. I’m not.”

Kyrgios told his podcast: “I just think it’s crazy, I feel so sorry for him.

“Preparing for an Australian Open or Grand Slam is enough for someone and the pressures that he has are so unique: he’s going for 21 slams, being Novak Djokovic preparing is already enough.

The immigration minister who made the call on Friday to deport Djokovic before the Open begins on Monday called the Serb a danger to the wider community in a country with some of the world’s strictest lockdown laws.

Kyrgios blew that logic away: “We’re treating him like he’s a weapon of mass destruction at the moment… literally he is here to play tennis.

“The mistreating of the people of Melbourne over the past two years has been atrocious, and I understand the anger towards him being unvaccinated and the medical exemption.

“I feel like the people, no matter what Novak does, they’re just going to say ‘get him out of our country’.

“He’s not doing anything to anyone, he just wants to come here and play the Australian Open.