Kenin or Swiatek: Who will be the new Queen of Clay? 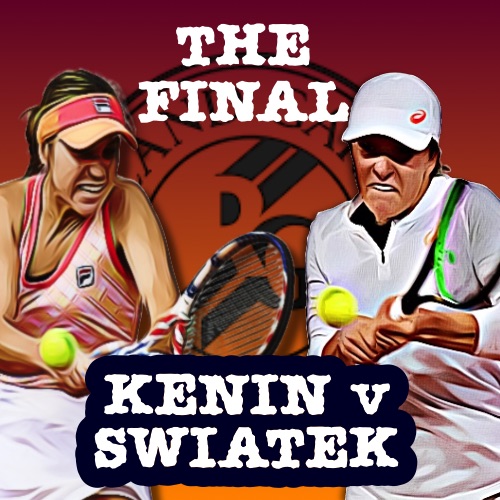 So we’re down to the last two – Sofia Kenin and Iga Swiatek.

One with a Grand Slam Open championship already under her belt, and the other eager to win her first major title.

Kenin is considered the favourite – even though clay is not really her surface.

Swiatek a virtual unknown – to those outside the tennis community – who has shocked the game with a series of powerful displays.

The 2020 Australian Open champion is looking for an edge.

“I’ve been there, done that. I know what the emotions are getting into your first Grand Slam final. I’m hoping she’s going to be a little bit nervous,” Kenin said.

Her ice-cool demeanour, rarely a celebratory move after each game, sees her focused, very focused on what lies ahead.

At 19, Swiatek is the youngest player to reach the women’s French Open final since Kim Clijsters in 2001.

For her it’s a very different approach. She has even talked about this just being a gap year, before she decides what she really wants to do in life.

Her love of music and rock and roll helps to motivate this Polish teenager. Can it motivate her one more time?

Kenin has admitted the five-month tennis shutdown because of the COVID-19 pandemic, saw her lose her motivation.

“I didn’t have really motivation when I knew that everything was shut down,” she said.

“It took some time for me to get my motivation back. I finally got it. I feel like I’m playing the best tennis right now, as well.”

Swiatek is only the second Polish woman to reach a Grand Slam final in the Open era after Agnieszka Radwanska at Wimbledon in 2012.

And … she had never been beyond the last 16 before this event.

But she is ready. She’s even had hep from a psychologist to focus her game.

“I feel like I’m ready,” she told the media in Paris yesterday.

“I also feel like I don’t have to win. I’m pretty okay with both scenarios.

“I think if I’m going to win, it’s going to be crazy and super overwhelming for me.”

The manner of her 6-1, 6-2 win over Simona Halep, followed by Italian Martina Trevisan 6-3, 6-1, then the dismissal of Argentine qualifier Nadia Podoroska 6-2, 6-1, shows she is ready.

And Kenin was equally powerful in her semi-final win over Petra Kvitova 6-4, 7-5.

Both on their day are capable of winning – there is so little between them.