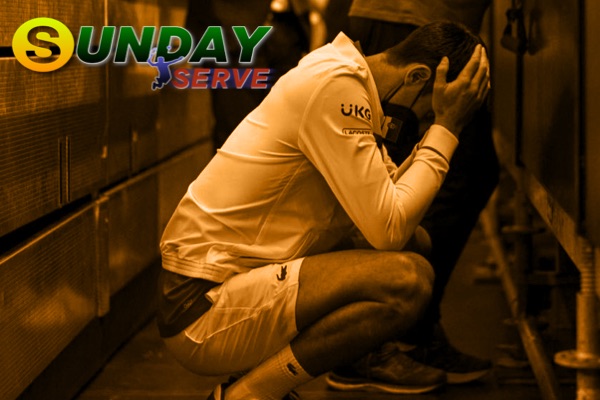 IF Novak Djokovic could prove he has a history of anaphylaxis (an allergic reaction) to approved COVID-19 vaccinations he could possible get an exemption for the Australian Open.

Tennis Australia has some exceptions that would allow a player to make to it to Melbourne next month.

TA has also confirmed that players who are pregnant, suffering from a chronic underlying medical condition or have a family history of ‘adverse events’ will not be allowed a medical exemption.

Players travelling to Australia will have to take a COVID-19 test both before flying and again upon arrival.

According to Spanish newspaper Marca, six airports will be used for charter flights for players.

They will be located in Dubai, Abu Dhabi, Los Angeles, Santiago, Tokyo and Singapore.

Tennis Australia has urged players to use one of their flights as it helps minimise the risk of possible infections.

GOOD to see someone in tennis has the balls to stand up to China.

Or, the Chinese government to be more precise.

“Unfortunately, the leadership in China has not addressed this very serious issue in any credible way,” WTA Chairman and CEO Steve Simon said this week.

“I have serious doubts that she is free, safe, and not subject to censorship, coercion, and intimidation.”

It’s the strongest public stand against China taken by a sports body, and several countries around the world are now considering a boycott of the Winter Olympics there early next year.

Their short statement has been slammed by players. On it they urged communication and not boycott.

Meanwhile, China fired back on Friday, saying pointedly that China “opposes the politicisation of sports”.

In an editorial, the State run Global Times newspaper, said the WTA was betraying the Olympic spirit and bringing politics into tennis.

“Some forces in the West are instigating a boycott against the Beijing 2022 Winter Olympics,” it added, referring to the February event which some groups want boycotted over China’s human rights record.

“We’re playing around the World doubles in the darts and Joe [Salisbury] probably rates himself as the best,” Cam Norrie said.

Goolagong-Cawley was named the winner of the inaugural The Dawn Award.

Named after swimming great Dawn Fraser, this award recognises a courageous ground-breaker who has demonstrated achievement against the odds and challenged the status quo.

FOR all her requests for privacy GST still cannot understand why Naomi Osaka continues to do exactly the opposite.

Her latest online post saw her posing in a silver mini dress on Instagram, complaining about a scar on her leg.

“😃 the scar on my leg is never gonna go away,” she captioned the photo.

US Open runner-up Leylah Fernandez revealed this week she is training with her younger sister Bianca, 17, ahead of the 2022 season.

Bianca is currently ranked at No. 759 in the world.

“Having a sister is like having a best friend you can’t get rid of. Training with Bianca and getting to share the love of Tennis with her has been amazing.

Enjoying every moment we get to spend together before the season,” Leylah said in a Twitter post.

SERENA Williams and Nick Kyrgios have played together once before, but this week the Aussie who has a comment on virtually everything, said the experience was an awkward one.

Kyrgios made the comments about the 23-time Slam champion on the No Boundaries Podcast during the week, and then shared a clip on Instagram.

“I’ve hit with Serena before,” he began. “I played mixed doubles with her at IPTL and it was the most uncomfortable experience for me because she was trying to do everything.

Kyrgios played alongside Serena Williams in 2014 as part of the Singapore Slammers team in the International Premier Tennis League.

For the record, the pair lost 6-3 to Kirsten Flipkens and Daniel Nestor of the Manila Mavericks.

But Kyrgios had a totally different vibe of playing with sister Venus in mixed doubles at Wimbledon this year.

He described the experience as “a dream come true,” and was devastated when he was forced to withdraw ahead of their second round match due to injury.

TALKING of Serena … she has written a book, for children, inspired by her daughter Alexis Olympia’s doll, Qai Qai.

Qai Qai is quite a celebrity on Instagram, as Williams and husband Alexis Ohanian, use the doll to tell stories of her adventures.

The book, titled “The Adventures of Qai Qai” is due for publication next September.

IT’S December, so we can now officially talk Christmas …

Emma Raducanu has confirmed she will not be spending Christmas at home with her family in south-east London.

She is staying in the Middle East to practice ahead of the first Grand Slam of 2022 in Australia next month.

As will many this year, preparing for a hopefully ‘open’ Melbourne.