It’s over – for some – as anger grows over quarantine extension 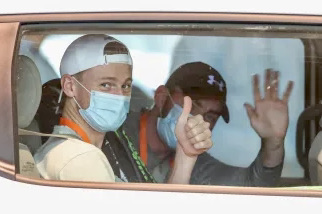 Australian Open players and their entourages have begun exiting COVID-19 quarantine after spending two weeks confined to their hotel rooms.

But many will be fired to stay another one or two days as officials made late, unannounced changes to their protocols, angering some players.

“The first group of 960 players, coaches and officials exited at 6pm local time, with the rest to leave over the coming days,” COVID-19 Quarantine Victoria (CQV) said in a statement.

But the announcement that quarantine release would be staggered over two days saw a spike in online comments, with many players furious at the delaying tactics.

” Just found out we’re not going to be able to leave the roo til midnight, which will put us close to 15 days in the room,” Tennys Sandgren said on social media.

“Its also another day we can’t practice.”

CQV said in a statement: “Australian Open quarantine residents are expected to depart this evening, with further residents to depart on Friday, Saturday and Sunday.

“Departure dates are subject to change.”

CQV said it had not recorded any new COVID-19 infections among the Australian Open cohort on Thursday. There remained a total of five active cases.

Spain’s Paula Badosa was the first player to reveal she had contracted the virus when she tested positive on her seventh day in quarantine. She has been moved to a “health hotel” to begin two more weeks of isolation.