It’s all about the stats for Novak now 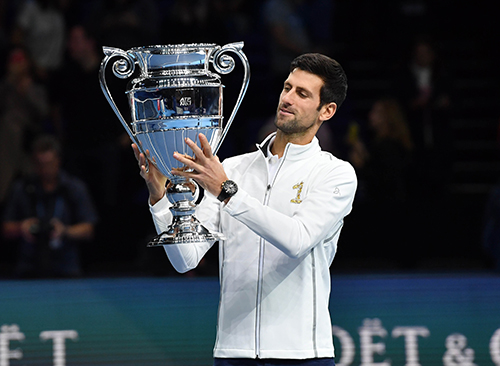 He may never get the love like Roger Federer and Rafael Nadal, but ATP life is all about the big-time stats now for Novak Djokovic.

The gluten-free, often science-sceptic Serb – an admittedly unique taste for many – has always lagged in the fan farourite sweeps, with his Swiss and Spanish rivals continually hoovering up worldwide admiration from the tennis public.

After a decade and a half at the top, the Big 3 are set in their elite domination,  with Djokovic now set to launch his own offensive based on the numbers and not the emotions.

As a result, the 33-year-old No. 1 has carefully plotted his tournament course through into 2021.

Djokovic is officially out of this month’s start of the Paris Bercy Masters, but will still to play for valuable insurance ranking points next week in Vienna and at the year-end Finals in London in November

“If I reach the quarter-finals in Vienna, I will be assured of first place until 2021, so I would meet a priority objective at this time,” he told Serbian media.

With the ATP ranking system temporarily tweaked to compensate for a lack of play during the COVID-19 pandemic, Djokovic would be unable to add to his ranking point total at any event he would have won in 2019 – like Paris, or 2021 – like Melbourne..

But Vienna and London are wide-open with points possibilities.

As holder at the Australian Open, Djokovic cannot add to his point total – but he could enter the fray with a wide margin on Nadal, nipping at his heels on world No. 2.

“I have chosen to play in Vienna and not in Paris because my goal right now is to add all the points I can; in the French tournament I could not add (any).

“I want to establish an important difference (margin)before the start next season,” he said.

The Serb who owns 17 Grand Slam titles to the joint 20 of Federer and Nadal,

is now hoping to better Federer’s record of the most weeks at No. 1.

“My priority objective is to be the one that accumulates the most weeks as No. 1 in the world – I want to surpass Federer’s record and his 310 weeks,”

Despite the optimistic hypes, it’s all to play for over the next three events of the abbreviated ATP season, with French Open winner Nadal and US Open champion Dominic Thiem keeping the pressure on.

One slip-up in Vienna, where he returns for the first time since 2007, could put paid to all of Djoko’s ranking point calculations,