ITF to Swiatek: Too bad you don’t like our scheduling 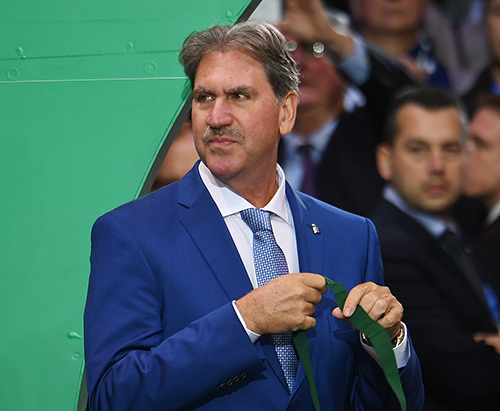 The ITF’s top boss has slapped down complaints from Iga Swiatek after the world No.  1 objected to a travel-crazy calendar which would have taken her from the WTA Finals in Texas to the BJK Cup finals in Scotland in the space of 48 hours.

Swiatek said there was no way she could compete in both events, crammed as they are into the space of a few November days,

But the American ITF head shrugged off the issue as a distraction and said nothing will be changed on the tennis calendar.

“The ITF is sorry that Iga Swiatek is unable to take part… and recognises that the schedule for the two major year-end events presents a challenge for players competing in both events,” David Haggerty told Reuters.

“We have been working with the WTA to try to coordinate suitable dates.

“While we were able to confirm the Billie Jean King Cup Finals in Glasgow back in June.

“The WTA Finals venue in Fort Worth, Texas was confirmed during the U.S. Open and restricted in terms of available dates.”

Swiatek said crossing the Atlantic and bridging a six-hour time difference before stepping onto court within hours of landing was beyond reason and physically dangerous for players.

She said that she therefore would not be able to play for Poland in the BJK Final.

“I’m disappointed that tennis governing bodies didn’t come to an agreement on something as basic as the calendar of tournaments, giving us only one day to travel through the globe and changing the time zone,” Swiatek posted this week on social media.

Haggerty said the show must go on and refused to budge on scheduling but seemed to indicate a possible chance for next season.

“We are committed to working with the WTA on the 2023 schedule so that we have a better transition between the two competitions,” he said.

The situation arose due to the WTA boycott of China over last year’s Peng Shuai incident.

Though nothing has been settled concerning the whereabouts of the former Chinese player, the WTA looks like abandoning its stand on the issue and getting back to business as usual in China, venue for at least 10 tournaments including the lucrative year-end finals in Shenzhen.