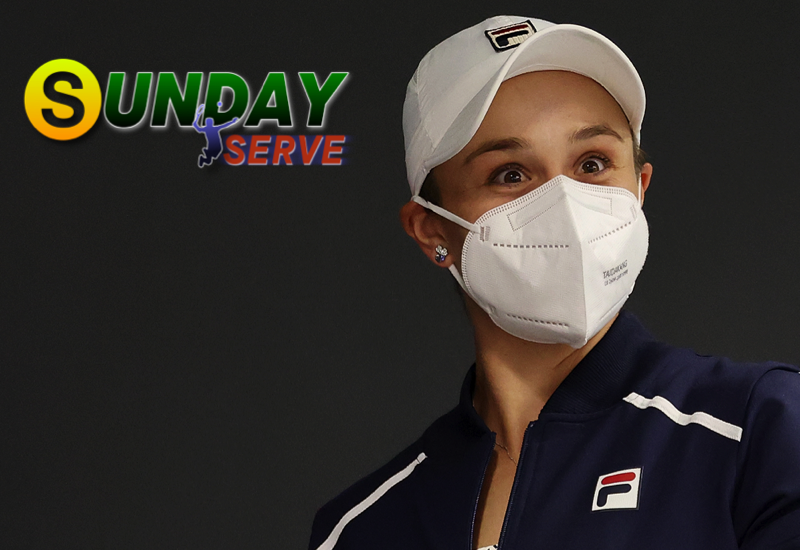 WHAT comes next for Ash Barty is the question on everyone’s lips, but the now retired world No.1 says we will have to “wait and see”.

At a press conference on Thursday Barty had to fend off persistent questions about her future.

“You have to wait and see. I’m not giving you everything right now. It’s alright. You can be patient. Patience is a virtue,” she said.

She was asked again and again said: “you’ll have to wait and see.”

But it didn’t stop there and Barty held her ground when further questions were asked.

“I’ve said exactly what I wanted to say. I’m an open book. I’m not hiding anything, I’ve got no secrets,” she said.

“I am just so proud of all of the work that I have done with my team. We have done this together right from the start, have enjoyed every single minute and, like I said, we have no regrets.”

Barty, who shocked the world of sport this week by announcing her retirement at the age of 25, earned US$23.8 million in prize money and millions more in sponsorships, making her the 14th best-paid female player in history.

She made US$3 million from endorsements last year and was the eighth-highest paid female athlete in 2021, pocketing US$6.9 million, according to Forbes.

Her total career earnings are estimated to be around the US$53 million.

But bookmakers have not dismissed a quick return to tennis for her as Betfair has offered short odds on her defending her Australian title in January 2023 at 6/4.

“The door is closed but it’s not padlocked,” she said.

Read into that what you want.

AUSTRALIAN legend Pat Rafter said he knew she was ready to step away after her Wimbledon win last July.

“I’ve been seeing this coming for a while. We’d spoken a little bit at the Aussie Open last year, she had her mind set on winning Wimbledon and retiring then,” Rafter told 2GB Radio in Sydney.

“I was a little surprised she’d come around again but I’m so happy for her. She’s gone out on her own terms… she knows what she wants.”

In a video posted on Instagram, she said she didn’t have the “physical drive” or “emotional want” to challenge herself at the top level of the sport any longer.

She said he was “spent” and felt it was time to “chase other dreams.”

And it is not hard to understand why.

Barty loved home and family, and throughout her career did not enjoy the constant travelling on the pro circuit.

She didn’t come through the Floridian tennis factories like so many of her opponents – she was a free spirit.

Homesickness struck in 2014 when she walked away after winning the Wimbledon Junior Championship at 15 and reaching the doubles finals three times.

She turned to cricket, her other love, and played for the Brisbane Heat in Australia.

And she was good. So good in fact that many in the know reckoned she could make the national team.

But tennis was deeply entrenched in her sporting psyche and she returned in 2016 and, as they say, the rest is history.

Barty’s coach Craig Tyzzer said he was surprised when she first mentioned retirement.

But Tyzzer then said that word was first mentioned almost three years ago in Paris after she had won her first Slam title.

“Ash probably remembers, even after her first grand slam win, I had prepared this speech about how profound this was going to be and what it meant to her,” Tyzzer said.

“The first thing she said to me was, ‘Can I retire now?’

SPORTS Illustrated’s tennis reporter Jon Wertheim was quick to comment of Barty’s announcement, suggesting it was far from a shock.

“Here’s the truth: While the Australian media has already described this as a ‘shock announcement’, it is anything but,” Wertheim wrote.

“Even as Barty was dominating the Australian Open in January, rumours whipped through the players’ lounge that she might gather the trophy and mic-drop retire.”

Wertheim added: “If you were scripting endings, what would be more climactic than a prototype fair dinkum Aussie winning her country’s major — the first homegrown champ in more than 40 years to do so — and exiting gracefully?”

And Aussie tennis great Sam Stosur said Barty’s experiences during Covid — where she was on the road for the year, unable to go home — helped with her decision.

“She really struggled through the pandemic, having to stay away from Australia so much and not see her family,” Stosur said. “That really weighed on her as well.”

AFTER the Barty shock, will Naomi Osaka be next?

Osaka has struggled with mental health issues and a recent heckler incident at India Wells would not have helped.

It would be no surprise if she also decided that the spotlight of the WTA Tour was too much.

And who could blame her.

But perhaps not … she returned to court this week in Miami with a solid 6-3, 6-4 win over of Aussie Astra Sharma before stating she was feeling much better.

“I don’t know if I’m allowed to say this, but I finally started talking to a therapist after Indian Wells. It only took like a year after French Open,” Osaka said.

When asked why Osaka decided to talk someone, she said it was because her sister Mari Osaka, “seemed very concerned for me.”

“I feel like I’ve been trying a lot of different things because I tend to internalize things, and I also want to do everything by myself,” Osaka said.

She then said her coach adding Wim Fissette, “kind of put it in a really good way. He was like, you hire a coach for tennis, for fitness. The mind is such a big thing. If you can get a professional to help you out .5 percent, that alone is worth it.”

If not Naomi, eyes will now focus on the Williams sisters, or will they?

RUSSOPHOBIA gathers pace in the USA, where many are backing a total ban on Russian players, including world No.2 Daniil Medvedev.
But it wasn’t as decisive as some in the so-called land of the free might have wanted. The poll conducted by Seton Hall, showed 43 per cent wanted Russians removed, 30 per cent didn’t, with the rest undecided.

NICK Kyrgios thrashed Andrey Rublev in straight sets at the Miami Open, but has received a fine for his on-court behaviour at last week’s Indian Wells tournament.

The Australian was fined $US25,000 by the ATP for nearly hitting a ball kid after smashing his racquet and yelling an audible obscenity during his Indian Wells loss to Rafael Nadal on March 18 AEDT.

He was fined $US20,000 for unsportsmanlike conduct and $US5,000 for the audible obscenity.

AND finally … Iga Swiatek will make history when she officially moves into top spot on the WTA rankings next week, April 4.