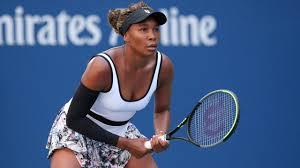 Venus Williams summed up her year with the very direct “I’m going home from here. I’m done” statement after her 6-4 6-4 loss to 161 seed Anna Karolina Schmeidlova on Sunday.

If there is somewhere to play, I won’t be there,” Williams added.

The elder Williams sister has seen her ranking drop to 76 and many are now questioning whether she will continue her career.

Asked if she would be back next year, she said she “definitely” would be.

Schmiedlova said she hoped Williams would be back competing in 2021.

“I still hope that this won’t be the end for her, I respect her a lot. She’s had an incredible career and is still playing really good,” she said.

“But there are so many good young players now in women’s tennis and you can lose to the one ranked 300 or 100 and it’s getting more difficult.