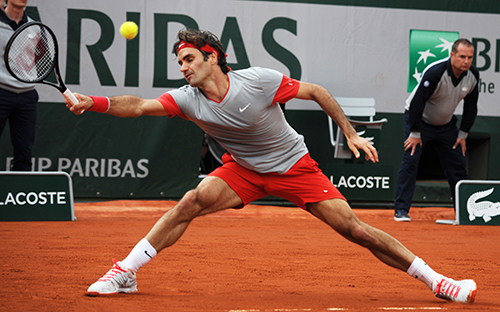 Roger Federer says he is glad he made the decision to return to clay as he prepares for the Madrid Open this week – three years after his last match on the surface.

Federer has missed the clay season for the past two years – last competing in Rome in May 2016.

“I’m happy that the decision I took last December, when I started feeling like I definitely want to play on the clay, was the right one,” Federer, 37, said.

“I haven’t looked back yet during the clay court build-up, thinking, ‘Ah, maybe I shouldn’t have.’ I’m happy I’m here, I’m happy I am on the surface.

“It takes some time getting used to how to construct the points a little bit more because there is more baseline (play), a possibility to play with more angles and height. It’s been interesting and fun, but not so challenging.”

Federer is the tournament’s fourth seed behind world No.1 Novak Djokovic, Rafael Nadal and Alexander Zverev.

However, the 20-times grand slam singles champion said he was not trying to burden himself with expectations when he steps out on court at the Caja Magica.

“It will be interesting to see how this tournament goes,” he said. “I do not have high expectations in some ways.

“But at the same time I also know that things are possible. Madrid always plays fast with the altitude here. I’m intrigued to find out.”

Federer received a bye to the second round and will play the winner of the match between France’s Richard Gasquet and Spanish teenager Alejandro Davidovich Fokina – who reached the semi-final of the Estoril Open last week.