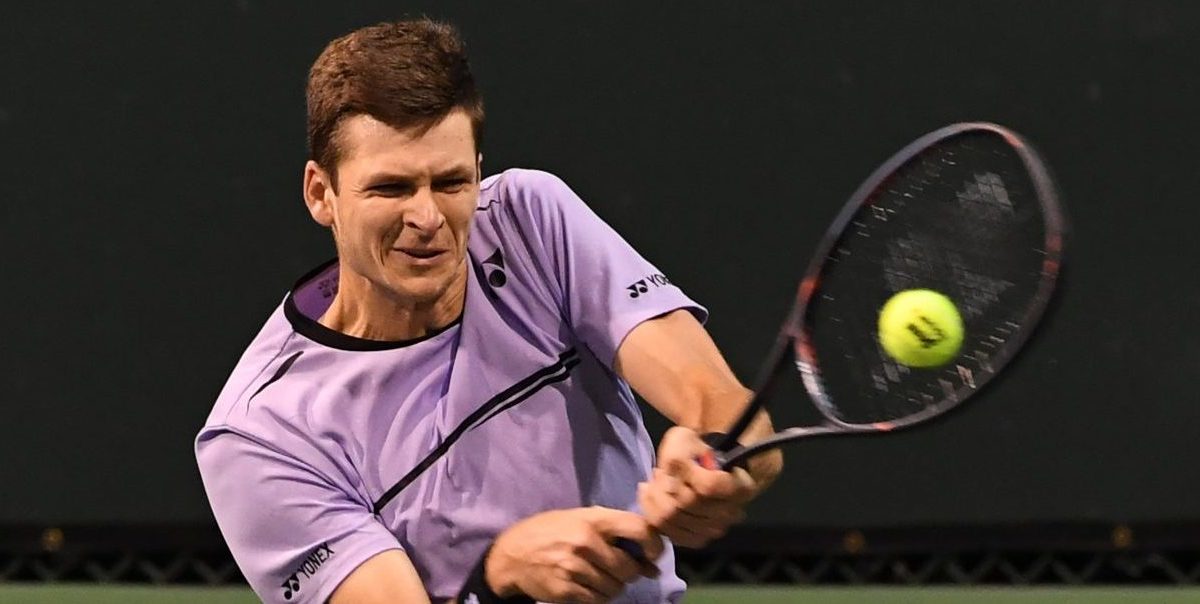 A new young star is emerging from Eastern Europe – and after beating sixth seed Kei Nishikori at Indian Wells this week – Tomasz Lorek caught up with Hubert Hurkacz for another of GrandSlam Tennis’ big reads.

He speaks slowly. You can feel he admires a vibrant lifestyle of a French capital city sitting in a beautiful brasserie like a philosopher, not a tennis player.

It’s a pure pleasure to talk to a young man from Wroclaw – 22-year-old Hubert Hurkacz. His on-court behaviour is slightly different to how Hubert reacts when he rests. 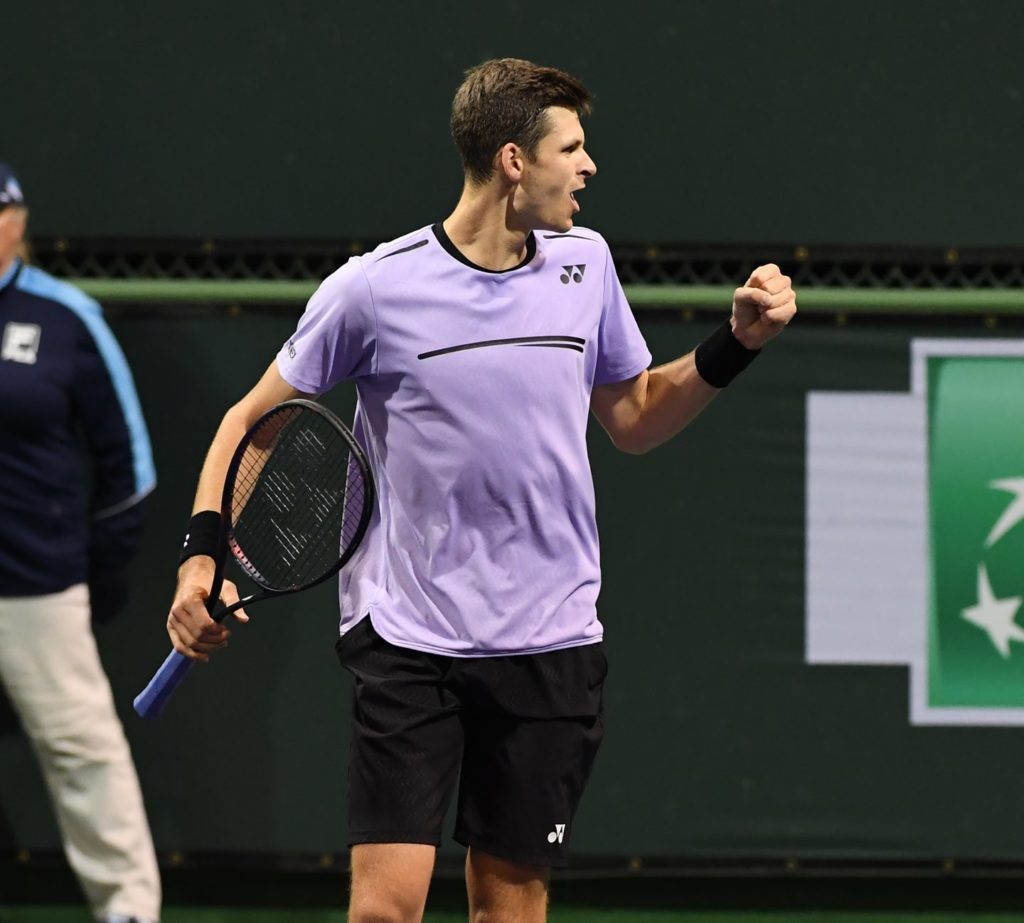 “I am not a die-hard tennis supporter. I would love to be John Lennon, not Andy Roddick, but when I observe Hubert on a tennis court, he seems to be a proper Aquarius.

“His brain is very analytical. He’s a massive tactician. Being Aquarius myself I can sail via Hubert’s brain.”

“Aquarians like myself, Valentino Rossi, Marc Marquez or Marat Safin (2000 US Open champion and 2005 Australian Open champion) are crazy people with a huge demand of analysis.

“From an outside perspective, we’re very energetic people who are too explosive, but it’s not true. 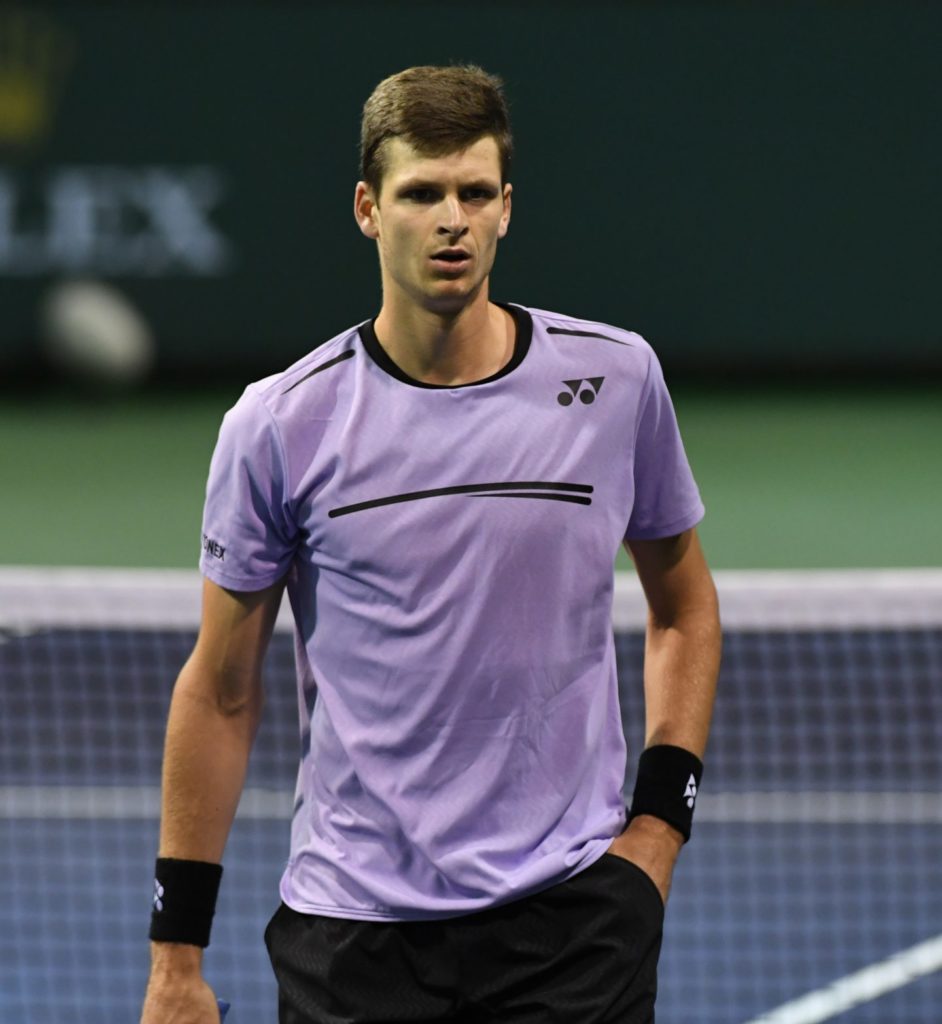 “We push the envelope, we love to break the limits, but we still use our brains to analyse a current situation even if we ride with an enormous velocity. It’s a paradox in a way, but that’s how beautifully complicated we are!”

You can see Hubert smiling when he prepares a meal for himself. No pace, no rush, he’s like a top cook on a ship sailing to Van Diemen’s land in the 18th century. No panic, ingredients are slowly landing on a plate.

“Hubi” as he’s nicknamed by friends, is totally opposite to JJ – Jerzy Janowicz, former world No. 14 ATP player.

Poland has been waiting for a while for a next tennis prodigy in men’s game.

“We had JJ, now we admire HH,” said Filip Kańczuła, a tennis coach from Wrocław, who coached Hurkacz as a talented youngster.

Jerzy Filip Janowicz peaked when he played Andy Murray at Wimbledon in a semifinal in 2013. Janowicz impressed his peers when he exploded on the tennis scene at the Paris indoor Masters 1000 event at Bercy in the autumn of 2012.

In November 2012, Janowicz managed to collect victories over Tursunov, Serra, Kohlschreiber, Cilić, Murray, Tipsarević and Simon. A final obstacle was too high – a Spaniard David Ferrer – was simply too strong for him. But still, it was a fabulous run into a final in Bercy and finishing as a runner-up to Ferrer was a massive impact for a young, talented Pole.

Jerzy Janowicz is now a dad, so his philosophy has slightly changed. JJ is a natural talent, but his road to a success in tennis was a tough one. He’s a character, he’s explosive, spontaneous and by his own words… “too naive and too patriotic”.

He played marathon matches at Davis Cup competition, whereas he should have saved energy for his individual exploits. He suffered some serious knee injuries and reached a summit on August 12, 2013 when he was ranked 14.

Now, another Polish volcano is trying to make a mark on the ATP tour, which is a huge task. “HH” knows what it takes to be in an elite group of world class tennis players.

“Hubi” was coached by Filip Kańczuła, who pushed him into a Grand Slam boys doubles final at the Australian Open in 2015.

In those days, Hubert partnered a young Slovakian player Alex Molcan. They finished as runners-up in 2015 juniors final in Melbourne Park.

Hubert was a shy boy then, but he was smart enough to use Kańczuła’s energy to step up the ladder.

Filip is very energetic, but not extreme, which helped Hurkacz to develop his own skills.

“Yes, we’ve been a good mixture and a proper combination in his formative years as a junior,” Kańczuła admits.

“Hubert has always been very polite, humble and ambitious. He seemed to walk around a practise court without an excitement, but deep inside himself he knew what was best for him.

“Hubi has a real treasure: he listens to people. His analytical skills are second to none. It’s his secret weapon. Hubi can make friends and not being arrogant at the same time. He listens to different people and finds the best spots for himself.

“I’m pretty sure it will help him to be a better and more versatile player”. 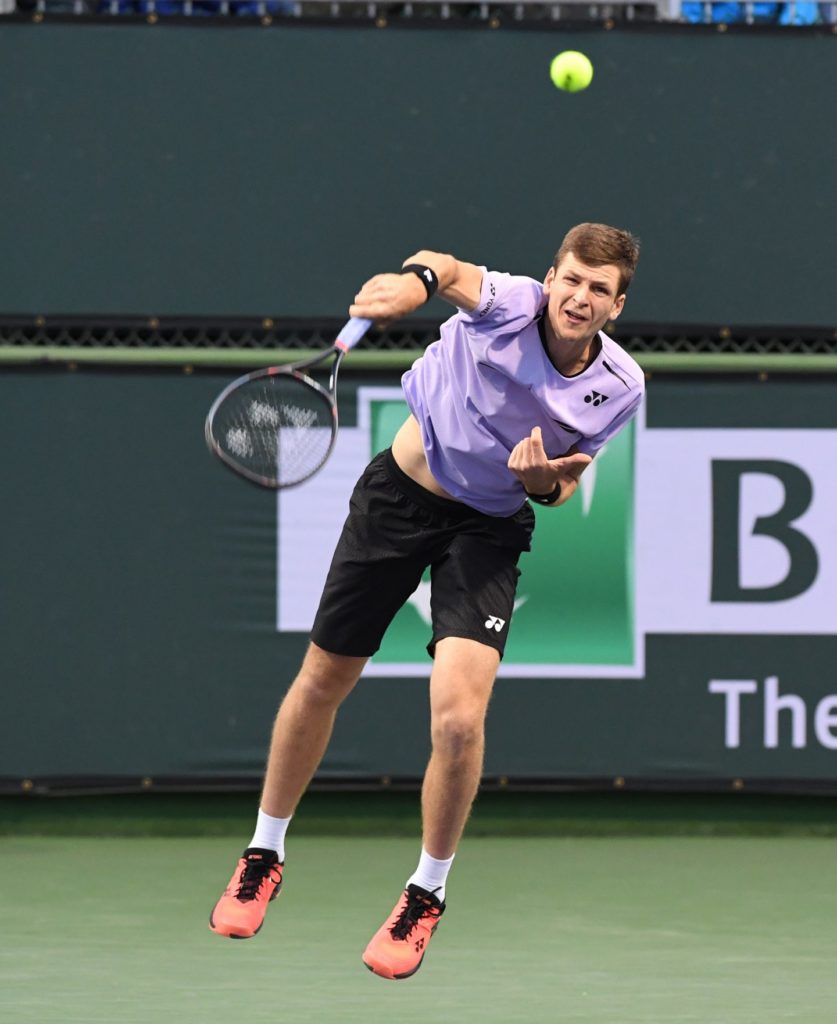 Hubert Hurkacz knows what he needs at certain stages of his career development.

“I think Łukasz Kubot deserves to have a monument in Poland. He helps me a lot, advises me what to do, so I can avoid mistakes,” he says.

“He is a very smart man and uses his wisdom to make me a better tennis player. I admire his a lot. People sometimes forget about Łukasz’ singles efforts, but he was ranked 41 in April 2010.”

His opinion about Kubot says a lot about his smart approach to tennis.

Kubot is a well educated man (he speaks fluent English, German, Czech and Slovak). He was pretty versatile as a singles player. He always found a perfect solution for right proportions mixing serve and volley with a great defensive game and a smart usage of his splendid backhand returns.

Kubot understands how crucial it is to help young players. He was lucky enough to travel to USA when he was a teenager with Radek Nijaki to learn at former Aussie great – John Newcombe’s tennis academy in Texas.

He was helped by his parents: his dad played football as a midfielder and had  a good connection with a Polish international, striker Andrzej Szarmach.

Szarmach was a World Cup medallist in 1974 and 1982, and it’s obvious that without his financial support at the early stage, Kubot’s tennis education would be less harmonious.

So, Łukasz now helps Hurkacz whenever “Hubi” needs a wise advise from an experienced compatriot …

Another man who helped Hubert to make a transition from a nice kid  into a good tennis player is Michał Przysiężny.

Przysiężny had a chance to be a hitting partner for Roger Federer when the 20-times  Grand Slam champion practised in Dubai.

Przysiężny, who was ranked 57 in January 2014, lives in Wroclaw – Hurkacz’s hometown. 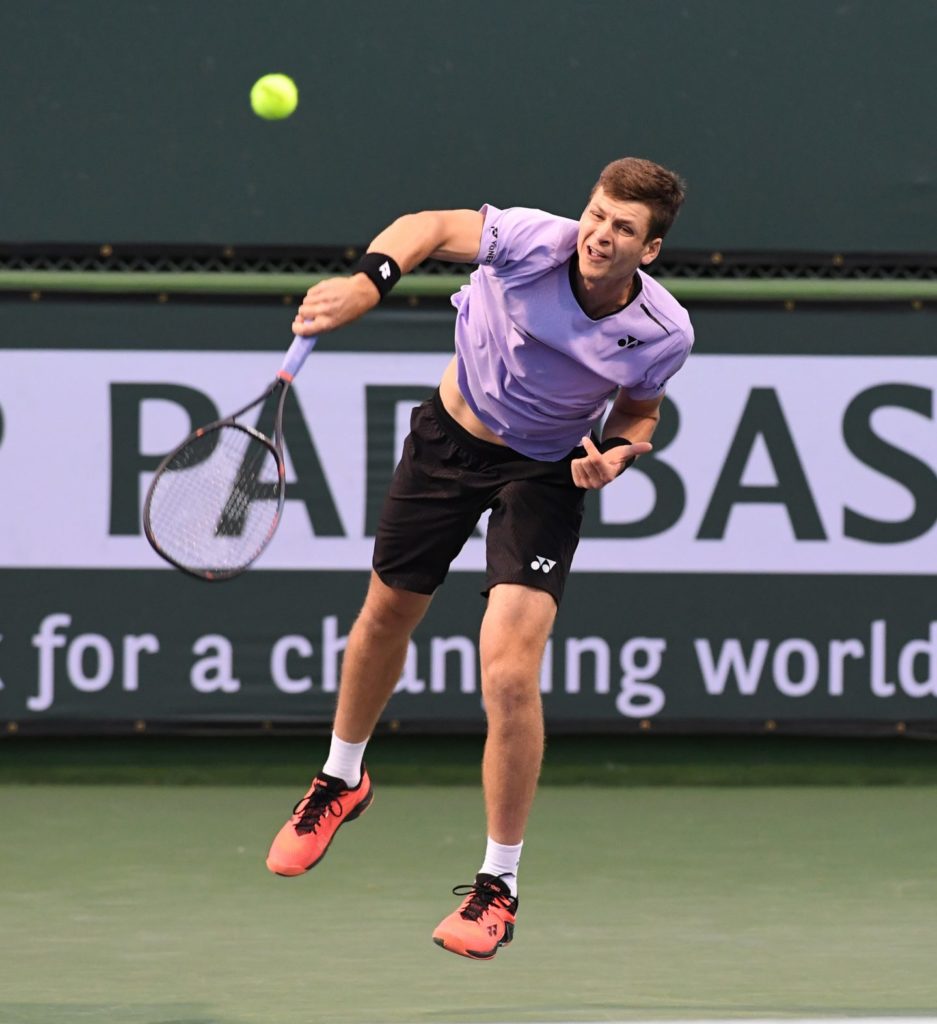 Przysiężny did a big favour for Pierre-Hugues Herbert when they won their first doubles title in Tokyo in 2014. A success in Japan was an eye opener for a great doubles champion from France – Nicolas Mahut.

A man with a delicious technique saw Przysiężny/Herbert triumph and then formed a very fruitful partnership with Herbert.

In Melbourne Park this year a French duo completed a career Grand Slam by beating Henri Kontinen/John Peers in the men’s doubles final.

So, Przysiężny, who was often nicknamed the “Polish Federer” (thanks to his unique one-handed backhand) is a mentor to young talents.

When Hubert Hurkacz started to serve a ball with an extreme velocity (242 km per hour), Przysiężny made a prophecy.

“If he’s smart, he can try to be the next Andy Roddick.  He has a good combination of forehand, nice first serve, he moves well (footwork) and has a mental strength. He’s composed, he doesn’t overreact. He’s well-balanced, doesn’t talk about tennis all the time which is good.”

Last year Hurkacz was ready to steal a set from a former 2005 Roland Garros junior champion and 2014 US Open champion,  Croat Marin Cilić in a second round match in Paris.

Now, Hubert knows how to beat the best after his win over Nishikori. He is blessed with good decisions.

He admires his current coach Rene Moller, a New Zealander who had his best ranking in 1993: 1096 in singles. Moller is a great tactician, he reads a game in a fantastic way.

“My coach is a truly fabulous person,” he said.  “He always comes with smart advice. I know I need to improve in some departments of my game. I need to be more aggressive, I need to use my strengths better. Rene is someone special. Even when I lost to Ivo Karlović in first round match at Melbourne Park this year, I wasn’t devastated or disappointed, because I knew we’re moving in a right direction.

“I am a big believer in making small steps to become a great champion. I don’t put unrealistic targets. I trust Rene and I truly believe one day hard work will pay off.”

When Canadian tennis prodigy Denis Shapovalov withdrew from the Next Gen ATP Finals in Milan last November HH was over a moon to be able to play in Milan and see where his talent would take him – against players like Stefanos Tsitsipas, Frances Tiafoe and Jaume Munar.

Round-robin matches brought a vast amount of experience. But, HH is not only a man obsessed with tennis. He wanted to see a famous piece of architecture, the Duomo di Milano cathedral.

Born in Wrocław – a city with a great architecture and unique buildings designed by Germans, Poles and Czechs – his love and a taste for architecture is understandable.

“I can’t be a history teacher at school, but I like to learn about past centuries. Playing tennis on a high level is beneficial: you see different cultures, you look at artwork and marvellous piece of an architecture: I honestly like it” – he says.

This January Hubert won a challenger event in Canberra. Then he moved to Melbourne. Any aspiring tennis player understands it’s helpful to have a hit before a proper match.

“Marian is a great man. He organised for me to practise with Novak. I am grateful for this opportunity, because I could see how far I am to be a fantastic player.

“Nole showed me why he is world No.1 and why he collected 15 Grand Slam titles in singles. He didn’t give you any free points. I can hit a ball really clean, but not as regular as a perfectionist from Serbia.

“Nole is so hilarious which I also like, because I don’t like a huge pressure on my shoulders. It was a worthy lesson.”

Hurkacz could have easily become a good basketball player. He likes basketball and admires Michael Jordan. Luckily for Polish tennis, Hubert’s parents: Krzysztof and Zofia painted a different picture when he was a growing kid. He saw their motto written in a spiritual mode: don’t do anything if you don’t like it.

Zofia was a Polish champion in tennis. There was no pressure at all, but as a young man “Hubi” wanted to have a go and tried to hit a tennis ball.

He loves to compete in an individual sport. Yes, so similar to Przysiężny, He loves car racing. One day, he would love to watch F1 race from terraces or paddock area.

Now, when Robert Kubica, pictured  below, a Pole who had won the Canadian GP in F1 racing in 2008 in Montreal, gets back to a pit lane after a life-threatening accident, the tension is even higher.

At Albert Park, this coming Sunday, March 17, Australian F1 GP a Polish driver will be on the grid. 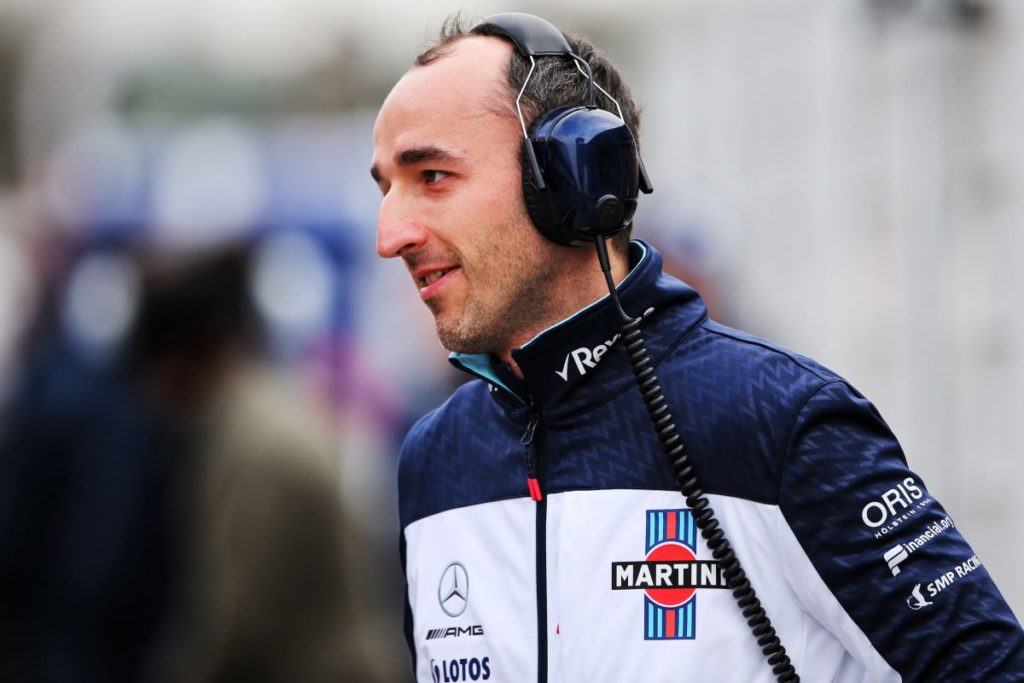 Melbourne is a favourite city for Hubert on the ATP World Tour map. He loves to read about Alan Jones, the first ever driver to win a world championship title for the Williams team. And Kubica is there for Williams this season.

He likes to watch Top Gear, his favourite TV show. So, quite possibly, one day, he will have his coffee next to a Ferrari motorhome on an F1 paddock with an ATP title under his belt.