“Hard” quarantiners to get crack at a first AO practice 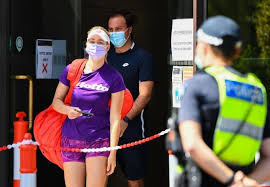 Players who have been locked down without respite in “hard” quarantine for the past fortnight are due to get the Melbourne training courts to themselves for a day and a half to make up for lost time.

The 72 unfortunates who landed aboard charter flights which contained a positive COVID-19 test are due to be allowed the Melbourne Park grounds to themselves on Friday and half of Saturday, after potential release from hotel confinement, Spain’s MARCA reported.

Despite late Tennis Australia backtracking on a full “release” by a day from Thursday to Friday, plans, the makeup practice time is expected to go ahead, giving former tennis inmates the barest taste of training prior to the February 8 start of the Open.

Players fresh from total lockdown only are expected to be allowed out on court as early as dawn.