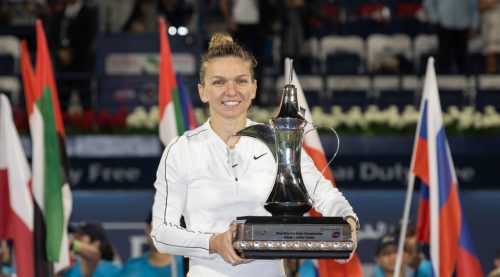 Simona Halep picked up a second trophy at the Dubai Championships on Saturday with a hard-fought 3-6, 6-3, 7-6(5) defeat of Elena Rybakina.

The numbers all fell into place for the Romanian top seed, who will maintain the WTA No. 2 ranking after this winning week.

Halep claimed her 20th career trophy as the event celebrated 20 years of WTA competition here. Rybakina missed out on 20th victory during the 2020 season.

“It’s pretty special to win this trophy again,” Halep said. “I felt this might be my week.

“I gave all I had. My legs were tired at the end,  but I didn’t want to give up. But right now, I feel pretty dead.

“I’m proud that I fought hard and earned this trophy for the second time.

“My game improved day by day, it was a big challenge to play such a young opponent,” she said of the 20-year-old Rybakina, whose ranking will rise to 17th.

“This title give me confidence that I can still beat the young ones,” the 28-year-old said. “Elena played amazing.”

Halep, who trained pre-season here “for the first time in my life” in the closing months of 2019, needed two and a half hours to win.

Halep was broken while serving for victory, with Rybakina taking it into a tiebreaker, which Halep won off her opponent’s concluding error.

Rybakina still leads the WTA on season match wins, standing 19-4. The Kazakh was playing her fourth final from five events this season; she won the Hobart tournament last month.

Rybakina has lifted her ranking massively over the past year, standing just inside the Top 200 a year ago.