Haas rolls back the years to set up Thiem showdown 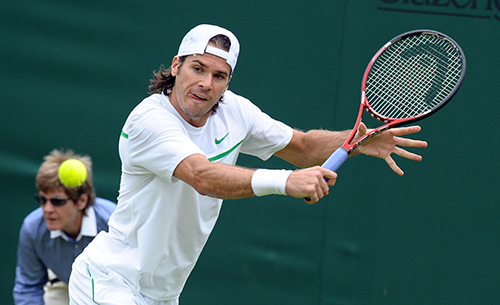 Former No. 2 Tommy Haas went back to the future as the 42-year-old set up a Berlin exhibition semi-final with third-ranked Dominic Thiem on Friday.

The retired German player defeated compatriot Jan-Lennard Struff 7-6 (5)., 7-6 (3) at the bett1ACES in  a match lasting for one and three-quarter hours which was played inside Hangar 6 at the city’s Tempelhof airport.

The veteran’s performance could offer encouragement to Roger Federer – a longtime Haas mate who turns 39 on August 8 – as the Swiss prepares to return after knee problems for the 2021 season hoping to add to his all-time record of 20 Grand Slam singles titles.

Haas v Thiem was played in front of 139 paying spectators who witnessed the battle of the generations.

“I had no pressure and was therefore able to play freely,” Haas, TD at the Indian Wells Masters said of his win amid the COVID-19 crisis which has shut down Tour tennis for more than four months.

“Jan-Lennard put me under pressure but then gave me some chances. In a match like this, the big points are important – I  played them well today,”

The handful of fans watching were among a maximum allowable of 300 (the remainder were tennis officials and workers plus Eurosport TV personnel.

Thiem has been busy during the virus lockdown, playing in various exhibition  events including his own this month in Kitzbuehel.

“I’m also looking forward to the match against Dominic,” Haas said. “I like his backhand, but of course it’s not going to be easy.

“I will try to recover and be ready to play. Dominic has played the most of everyone in the past few weeks and is in top shape.

“The next generation should take a closer look at him, he’s a pure professional athlete. You always look forward to such matches.”