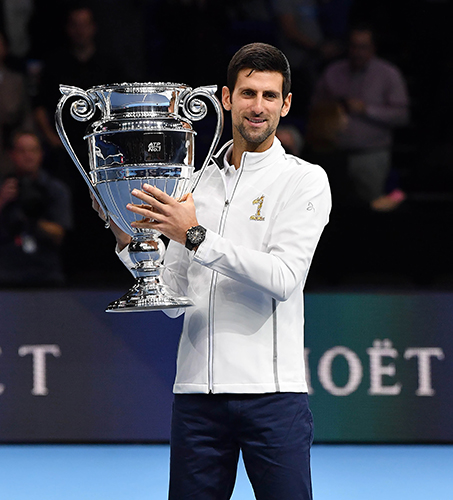 After a DQ at the US Open and a straight-sets thrashing by Rafael Nadal in the  Roland Garros final, Novak Djokovic is looking for some relief at the ATP Finals.

The Serb goes into the eight-man season finale with at least one morale-boosting assurance – he’s guaranteed the year-end No. 1 ranking for a sixth time.

Djokovic begins play in London at the final edition here before the move to Turin by facing tournament debutant Diego Schwartzman on Monday in group play.

The chance to come good in the capital is one that the 33-year-old is taking extremely seriously.

“Coming in and knowing I’m year-end No. 1 releases some of the pressure,” he said on Friday. “But that doesn’t change what I hope to achieve here.

“I want to win every single match I play to get hands on the trophy. I’m hoping to end the season in the best possible way.

“I’ve had a lot of success here over the past 10 years (four straight titles 2012-2015). That also helps me feel more confident and comfortable on court.”

Like the other seven participants, Djokovic will have to get used to empty stands due to COVID-19 restrictions in London.

“It will be strange to give a farewell to London without fans present.

“But we are all very grateful and lucky to be able to play.”

But after competing frequently without crowds since tennis returned form the five-month spring-summer virus pause, not a lot will be new in terms of the empty ambience.

“it’s different circumstances, no crowds at matches will be strange,” he said.  “But we are used to it by now.