Gambling with the future of tennis

Big news? Probably not. Soccer clubs the world over all have big-dollar deals.

But, what this deal did was to make it, inadvertently, easy for punters to gamble on the lowest grade tennis matches where kids barely make $250 a game.

Many don’t even earn $1000 for winning a tournament somewhere out there in the backwoods of international tennis.

Compare that inequality with the millions being made by the 100 or so ‘big-name’ stars of the game – and, probably more importantly – the tens of millions being wagered on them online.

Tennis is probably the easiest of sports to bet on – given its single player nature (no offence to doubles partnerships) – and now ranks as the second most bet on sport behind soccer.

So when the ITF agreed their deal, a deal they thought, naively perhaps, would assist the growth off the game worldwide, they put in place a database of information that has now enabled corruption on an industrial scale to seriously harm the integrity of the grassroots of the game.

We’re not pointing fingers – and we’re sure the deals were done with the best of intentions – but little did the ITF realise how they were now playing into the hands of criminal gangs, milking millions from the game, with the help of corrupted players.

Every umpire at every ITF event would have a laptop to immediately put in game data, after every game, set and match, which would then automatically feed their own records, but also those of betting agencies signed up to receive it.

Step forward Mr Corruption – seeing a dollar or two to be made.As a result, this data has since fallen into hands of gangs across

Europe and into China, where multiple betting scams are making small fortunes.

As result of all that in December, a three-year independent review, costing millions, ruled that betting data for the bottom-level $15,000 events should no longer be streamed.

It was a laudable decision to take away key data that affects gaming trends and if done right, would help to disrupt betting algorithms.

But as we publish this edition of SundayServe that reform has yet to be implemented.

Here’s the response from the ITF: “Change isn’t easy. We’re at the start of the season, when there are always fewer job opportunities, and we believe that these reforms will shake out over the course of the year.” – Kris Dent, director of ITF circuits.

But while the ITF sits on its hands, extortion and corruption grows as players at the lower levels struggle to make a living wage.

The ITF controls about 14,000 players – all living the dream.

All wanting to be the next Rafa or Roger. Yet the reality is about half of them barely make a few hundred dollars a week, some don’t make anything at all.

They will pay $50 to enter an event in Africa or eastern Europe, and will make $500 if they win the week-long tournament.

Take out living expenses, and it doesn’t take an accountant to work out this is not going to make you anywhere near enough to live on, let alone earn enough to enter the next one.

And if you are really desperate for the next rung on the ladder, some tournamens are allegedly charging as much as $2500 to ‘buy’ a wildcard spot.

One report recently cited Chileans suddenly appearing as wildcards in North African tournaments. We wonder why, and how?

And we also wonder how many are easy prey for the ‘fixers’ who hover in the shadows trying to bribe players.

The fixers are often retired third-grade players, still looking to make a few dollars from the game.

None will be ATP or WTA ranked – their lifestyles are assured.

But they know the game and they can spot the vulnerable. According to sources there are about a hundred different ways one can bet on a game.

And the gangs operating far away from the courts know it.

They will use corrupt ex-players or tennis ‘fringe dwellers’ to approach and bribe a player.

Lose a set 6-0, or lose the middle set but win the game. All ploys used.

The said report alleged that there was a core group of 16 players who have repeatedly been reported for suspicious actives; 26,000 matches examined for possible activity ad as many as 70 players who may be acting as ‘fixers’

So how does it work? Thanks to the BBC and a recent report on corruption in tennis, it really is very simple.

Gangs don’t bet in low numbers, or as themselves obviously.  It all starts with identity theft – in the thousands.

Then thousands of unsuspecting stolen identities are betting $50 or $100 on the outcome of a set somewhere; hoping to pick a 5-1 odds bet. Maybe more.

Put 10,000 bets randomly placed, through the gangs’ already set up algorithm systems, and it becomes virtually impossible to track.

Gangs will constantly use the ITF data, uploaded by each umpire, sometimes hacked into, to keep in front of the trends.

And the fixers will be there at practise, using their contacts to speak to a coach, or at lowest levels, the player.

Losing the middle set 6-0 but coming back to win wouldn’t attract too much attention, normally.

But tennis is slowly catching up. Its integrity unit now employs analysts to monitor trends.

There has been some success. In Spain, and recently in France where seven relatively unknown players were arrested as part of the latest match-fixing probe.

But keeping up with the criminal gangs, many of whom operate in the dark corners of democracy – Albania, Armenia are two recent areas of concern – and Sicily another – is not easy.

Some would argue an almost impossible task.

Which brings us to big question: How to stop it and how to improve the lot of the players, so he or she doesn’t succumb to such life-changing temptation.

We say ‘life-changing’ because that is what it is – get caught and you are banned for life. And quite rightly so.

So what is the answer? Some argue that all stats for all matches below a certain level should not be made available, thus cutting off the source of data the gangs thrive on.

Others believe it would be better to increase the number of qualifying draws, giving more players a shot at stardom.

That may help some, but for others it would be the end of their tennis dream.

Perhaps a percentage levy on all ATP earnings – say 2% – should be set aside to improve prize monies and earning at lower ITF tournaments.

Other sports give percentages of TV rights deals to grassroots, why not tennis?

He knows he has big problem to solve – and it’s not just the criminality element.

“The original objectives (of the ITF initiatives) were to improve the pathway, help more players break even, reduce hosting costs and the risk of integrity infringements,” he said.

But “not one of these has been achieved”.

Meanwhile, somewhere this week, a shady figure in the background will attempt to bribe a kid struggling to make his dream with a grand or two, so his gang bosses can clean up again with her bookies. 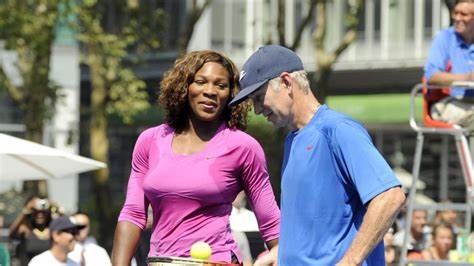 THERE’S  some bizarre stories on the web, with tennis no exception. One favourite spotted this week was an interview with Rafa

In a world where gender is so, so important to many, uncle Toni’s assertion that McEnroe is still, today, too good for the best of our women’s champions, is asking for trouble.

Now, the hypothetical debate about different generational champions and how they would match-up has been ongoing for many years. 35 years ago, maybe more, there was the Marciano-Ali debate.

Athletics has similarly had its comparisons. Owens v Bolt. And NFL MLB and world soccer has also talked through its greats.

Great fun and always divides the room. But when it comes to putting up women versus men, you are treading on dangerous ground.

Uncle Toni had met McEnroe back in 2016 and commented: “He looked in a good shape, until less time ago I thought McEnroe would beat Serena Williams. And I think the women’s team would not beat a team of second series.

Does it speak bad about women? Nope. You do not have to look for a war between genders”.

Let’s leave it there, shall we.

AND finally … Nick Kyrgios – love him or loathe him – and the tennis work is divided down the middle.

Forget there tantrums for a minute, we’ll that for another debate. Lets’ look at this outrageous underarm save he has been ‘legally’ using of late.

Kyrgios was criticised by many for the underarm serve against Rafael Nadal during his match in Acapulco.

Kyrgios was disrespectful for using such a tactic. Kyrgios then repeated the serve at the Miami Open last week against Dusan Lajovic.

It proved to be successful. The first time the underarm serve became an ace. Then he used it again to convert a set point.

Good for the game?  Judy Murray seems to think so. Andy’s mum the week tweeted:

“The underarm serve [love].The whole point of tennis competition is to disrupt ur opponents game by applying pressure through changing the speed, spin, direction, depth or height of the ball. And that includes the serve. Kyrgios is a genius. I’m surprised more players don’t do it.”

Stand by for some ‘fun’ at both RG and Wimbledon this summer!