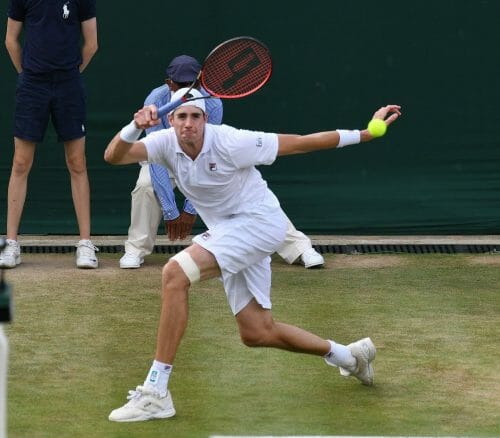 Take a trip down memory lane with us as we look at the careers of some tennis greats, in our news LoveAll series, with former London Times tennis correspondent Barry Flatman. Today we look back at the career of Gabriela Sabatini.

Almost a third of a century has elapsed since Gabriela Sabatini experienced her most illustrious achievement on a tennis court but the photogenic Argentine is still revered as one of the most famed players whose beauty and glamorous image transcended her ability with a racket.

Since the raven-haired ‘soon to be 50-year-old’ won her only Grand Slam title at the 1990 US Open, many have filled the role Sabatini prematurely left by retiring from the sport little more than six years later. Aged just 26 when she seemed almost relieved to announce she had played her last competitive rally, there have been several successors to the label of ‘tennis’ most acclaimed babe; the likes of Anna Kournikova, Maria Sharapova and several others have experienced similar adulation and wealth after proving their good looks combined so well with an unquestioned baseline ability.

Though Sabatini remains unmarried and reluctant to talk about any romance, her list of former reported suitors still makes impressive reading; president of the United States Donald Trump, Prince Albert of Monaco, French tennis legend Henri Leconte, pop singer Michael Bolton, actor Mickey Rourke and numerous others. Some these liaisons struggled to run more than a month, others seemingly had far more longevity.

The paths of Sabatini and Trump, who leased a high-visibility corporate box at the US Open long before he even contemplated the possibility of taking up residence in the White House, crossed in 1989 when he was said to be on a break from second wife Marla Marples.

A year earlier Sabatini dated Prince Albert of Monaco, then one of the most eligible bachelors in the world, and Leconte reportedly pursued his fellow tennis player around the globe after an assignation at the Miami Masters event, then held on Key Biscayne. But for all her allure, Sabatini always remained shy and did not enjoy the spotlight to the extent that early in her career she deliberately lost matches.

Just a few years ago she told the Argentine newspaper, La Nacion: “It was that bad, when I was younger and thought that I had to talk after winning a tournament, I often lost in the semi-finals so I did not have to. I got very nervous at that point. But at the same time, I was very competitive, and I got frustrated. I think my fame and my public profile had something to do with the fact that I did not become world number one. To be so famous would also have been a problem.”

Sabatini’s world singles ranking peaked in third position in 1989 although proof of her consistency comes with the fact the actually spent ten years on the WTA’s top ten. She was first confronted by fame when she became the world’s outstanding girl player, winning the Orange Bowl in Miami aged just 13 and a year later in 1984 added the French Open girls’ singles trophy to her collection.

Tennis has long centred on personal rivalries and almost as soon as Sabatini emerged on the main women’s tour, she found in a nemesis in Steffi Graf. The German was of course one of the all-time greats of the game and spent 377 weeks on top of the WTA rankings but more than occasionally Sabatini would prevail and probably the most memorable occasion was the 1990 US Open final. However 11 Sabatini wins in a total of 40 meetings proved the meetings were not a foregone conclusion.

For several years Gabriela Sabatini has proved herself to be a highly successful businesswoman with her signature perfume still a best seller. But last year during the French Open, the International Tennis Federation presented her with its’ highest accolade, the Philippe Chatrier Award. Casting her memory back over all her accomplishments, she again acknowledged the players of today have a far more demanding challenge with social media examining their every move.

She won 27 singles titles on the WTA circuit including four Italian Opens. Before she turned 20 she had reached the semi-finals of all four major tournaments. She carried the banner of Argentina in the Olympic Games opening ceremony and six years ago was named the sixth most influential Hispanic female of all time by espnW and ESPN Deportes.

In conclusion she admitted: “I remember many times I was more focused on what people or the media wanted me to become than I what I wanted for myself. But now there is more competition, players have to play really well in every round to win a title. It remains a truly great sport.” 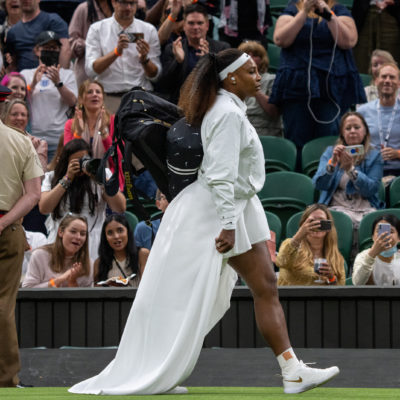 Has Serena lost her last chance of record title haul?

Au Revoir or the final farewell for a tennis legend?