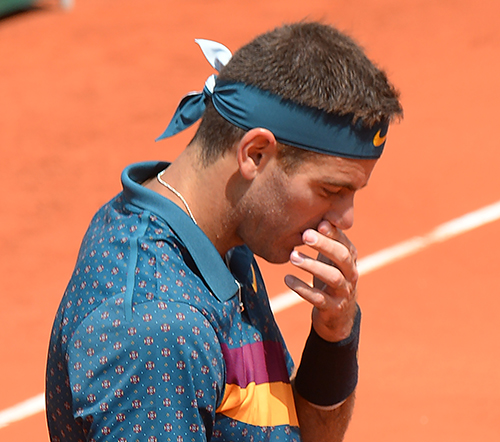 A year after his last match and frustrated by lingering knee pain, Juan Martin del Potro may turn to Roger Federer’s longtime doctor for help.
The Argentine who once stood third in the world but has slipped to 128th after a decade of on-off wrist and knee injuries, is reportedly ready to enlist the aid of Bern specialist Roland Bieder.

The orthopedic ace has patched up Federer’ on more than one occasion, with the doctor even seen sitting in the Federer team box during the 2003 Wimbledon edition which the Swiss won.
He also twice performed successful knee surgery on Stan Wawrinka in summer, 2017.

The 31-year-old Del Potro, who last played in June, 2019, first round at Queen’s club, London, has told Argentine media of his concerns as tennis remains in lockdown for another month due to the COVID-19 crisis.

“The knee continues to give me problems. There are better days and others where pain is important,” he said.
“I have the same problems and symptoms as a friend’s grandmother.
“I get the most pain climbing a ladder or carrying a little weight. But if I must play with pain in order to return to the court I would bear it.”

Delpo has already had a go with the Barcelona knee doctor of Rafael Nadal, Angel Ruiz Cotorro, and has consulted with another medical guru in Miami – both without success.

Since his career stalled, the player has parted with coach Sebastian Prieto after two years.

Lining up Swiss surgery should be easy, with Delpo under management by  Federer’s Team8 company; Federer is currently rehabbing himself after two knee procedures in 2020 and is not expected back until the New Year.

The South American is no stranger to physical problems after dealing with multiple wrist surgeries following his stunning upset of Federer for the 2009 US Open title.