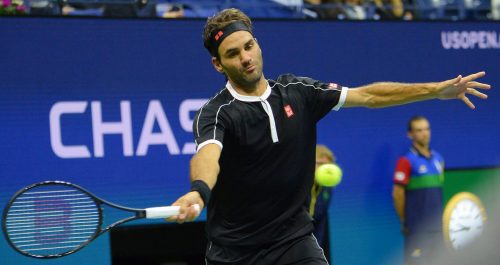 Roger Federer got an early wake-up call at the US Open on Monday, losing the first set before shifting gears to roll over an Indian opponent who has yet to earn an ATP win for a place in the second round.

Federer defeated 190th-ranked Sumit Nagal 4-6, 6-1, 6-2, 6-4, with the 20-time Grand Slam winner forced to lift his game against the winner of exactly one Challenger-level title two years ago.

Federer turned in a shocker of a first set, complete with 19 unforced errors before quickly mending his ways.

He slowly recovered his mojo but had to fight back at the end as he saved four  break points while serving for the unexpectedly challenging victory into the second round.

“I tried to forget the first set,” Federer said. “I had to play tough and stay with him.

“The set was difficult for me, I had the lead and he came back, credit to him.”

“I was missing a lot of balls, I had to cut back on unforced errors.

“At the end I actually played good tennis, I’m happy. It was nice to serve it out though, that was a relief.”

The Swiss, who turned 38 this month, joined Novak Djokovic with opening-day wins.

The Serb pounced 6-4, 6-1, 6-4 to win his 34th match from his last 35 then demonstrated a few quick dance moves from an Instagram post made over the weekend during a light moment in Central Park with an impromptu band of musicians.

Djokovic is taking his title defence with upmost seriousness.

“I’m very motivated, very focused, very determined to do well. I have been in this particular situation many times in my career,” he said.

“I know what feels comfortable for me, what I need to do in order to get far in the tournament.

“I have lots of respect for anybody that I play against; today today I played someone I never faced before. That doesn’t happen too often.

“It was a solid performance. I think I can still play better, but it’s kind of expected for the first match; I’m hoping that I can build from here.”

“It was a great battle, the level was good, he was playing well and it was a tough match,” Wawrinka, 34, said.

“It was a close one, I’m happy to go through. I’m moving well, feeling well.”

“I need to keep building confidence,” the 2016 champion here added. “I’m pleased to be back, hopefully I can go far.

“I’m feeling good on the court but I need to get through tough matches like this. I need to have the feeling of my game and not think too much.”

The form player of the month, Russian fifth seed Daniil Medvedev, continued the momentum which took him to the Cincinnati Masters title eight days ago as he stopped Prajnesh Gunneswaren of India 6-4, 6-1, 6-2.

Victory marked the 15th match win this month for the 23-year-old who was seen by the trainer during his victory for a glute niggle.

Kei Nishikori, losing finalist five years ago to Marin Cilic, advanced without too much effort as injured qualifying opponent Marco Trungelliiti  had to quit with a back injury, handing Asia’s top player a 6-1, 4-1 decision in 47 minutes.

“Honestly I wanted to play a little more because I was feeling good on the court,” the sevenths seed said.

“I wanted to get little more confidence, playing more points, I think my rhythm was going.”

“He started feeling pain after first set. But I’m really fresh now. One more practice tomorrow, and ready for second round.”

Former Wimbledon finalist Thomas Berdych, who has been out injured for four months in 2019 with a hip problem, was unable to build upon his comeback, losing to 18-year-old Us qualifier Jenson Brooksby 6-1, 2-6, 6-4, -4, with the Czech still looking fragile in his game.

Korean qualifier Soonwoo Kwon had to leave the court in a wheelchair after an ankle injury cut shot his match; he lost 6-3, 6-4, 2-6, 2-3 to Bolivian Hugo Dellien.