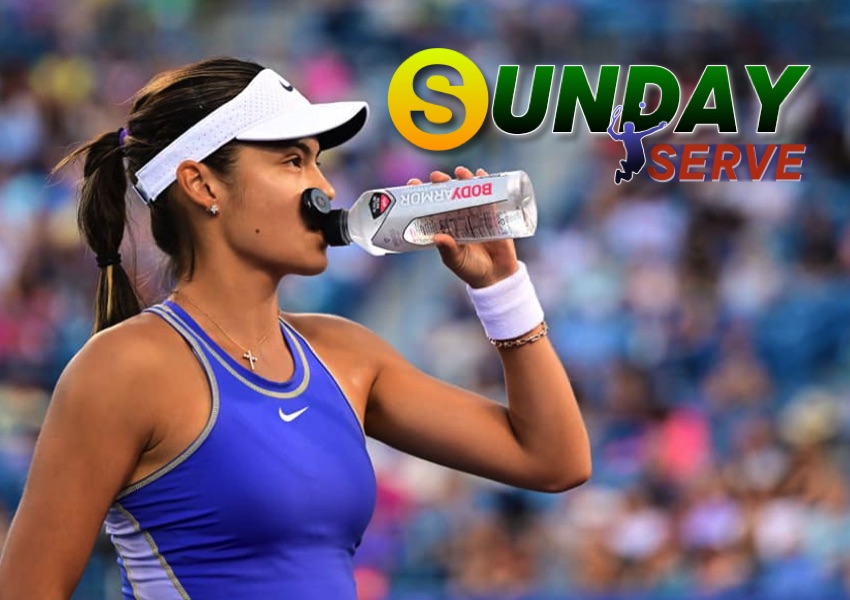 A REFRESHED Emma Raducanu has taken a different approach to her game in the US as she prepares to defend her US Open title.

Raducanu bowed out of Cincinnati, losing to world No.8 Jessica Pegula 7-5, 6-4, but earlier wins over Serena Williams and Victoria Azarenka has seen her become more aggressive during matches.

Some critics have slated her for being too passive, losing rallies too easily.

“I think this week was a great step for me, Raducanu said after the Pegula loss.

“I think it’s probably like the first tournament that I have actually started going for my shots more.

“I think that recently I was kind of playing and hoping they would miss, and I think I was pushing the ball around a lot more, rather than this week I kind of just was like, look, I’m just going to try, I don’t care if I make errors, like it’s fine, but I’m just going to like overhit if anything.”

Raducanu was upbeat after the third round loss in Ohio, saying she left really good and preparation for New York was going well.

“It feels really good. I think that I can take it as a positive week and I actually feel like I’m heading in a good direction again,” she said.

And her chances of winning the New York major again?

“I’m rewatching my matches from the US Open (last year) and there are certain moments where I was given a lot of gifts or maybe they got a bit tight,” Raducanu said.

“I think I have improved as a player. I’m finding this sort of freedom in my swinging. I think that I achieved something great, of course, but I was playing completely free and I’m starting to do that again.”

The US Open starts on August 29.

SERENA Williams made a quick exit after losing to Emma Raducanu in straight sets in the opening round of the Cincinnati Masters last week, but gave the Brit congratulations when they shook hands at the net.

“Thank you, great match, thank you,” Williams said to Raducanu as the 19-year-old smiled as she shook hands with the tennis legend.

Williams then went to her chair and made a quick exit from the court.

As so often happens in elite sport, the timing of a retirement is so important.

Embarrassing for such a great champion to see her thrashed in such manner.

DIEGO Schwartzman is in the news for the wrong reasons after reportedly insulting the father of his opponent Stefanos Tsitsipas on Thursday.

The Argentine was left unhappy with the world No 4’s conversations with his father in his box at the Cincinnati event and complained to the umpire.

Father Apostolos Tstisipas has a reputation for being a distracting presence in the stands during matches and it appears he irritated Schwartzman.

Tsitsipas romped past Schwartzman 6-3, 6-3 but he was seen consulting with his dad between points and Schwartzman was not amused.

THE US Open singles champions will receive $2.6 million this year, with total player monies beating $60 million for the first time.

And a large portion of that $60m has been is allocated to the earlier rounds.

STICKING with the money angle, Simona Halep joined Serena and Venus Williams as the only WTA Tour players to earn more than $40 million in career prize-money last week.

Halep won the National Bank Open and collected a winner’s check worth $439,700.

A fan on Court No. 8 at the Cincinnati Masters was was told to leave the arena after she displayed the Ukrainian flag during a match between Russians Anna Kalinskaya and Anastasia Potapova.

One of the players, we re not sure which one, protested to the umpire Morgane Lara.

The umpire asked the spectator to put the flag away but the Ukrainian flag waver, Lola, refused.

Ukrainian player Alexandr Dolgopolov wrote on this Twitter account, urging all spectators to take the flag to matches where Russian and Belarusian players take part.

“To all the people who have admired my tennis and who plan to follow the US Open live, I ask you to carry and display a flag of Ukraine in all matches involving Russian and Belarusian tennis players,” he wrote.

NIKOLOZ Basilashvili remotely attended a trial hearing on Tuesday in Tbilisi, accused of violence against his ex-wife Neli Dorokashvili.

Dorokashvili presented a video recording, from 2018, of the conflict with Basilashvili, where she was asking her ex-husband “why he had abused her”.

Basilashvili denied the charges and said that “nothing could be seen in the video”.

A full trial is expected top begin in Georgia in November.

The world No.75 won the Australian Open doubles title with Kyrgios earlier this year.

Rumours are growing that Serena Williams is pregnant with her second child.

The picture, above, of Serena appeared on Snapchat this week, but was quickly taken down, although several celebrity websites posted that her publicist Kelly Bush Novak confirmed the pregnancy.