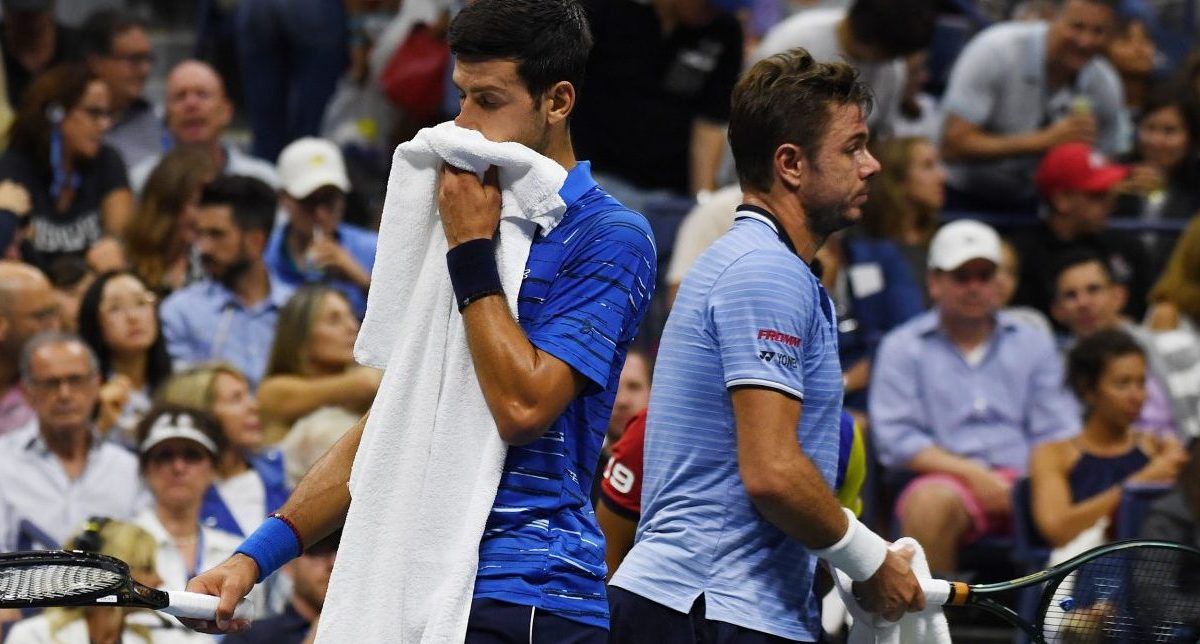 Roger Federer laid a comprehensive 6-2, 6-2, 6-0 beatdown on Belgian David Goffin on Sunday as the Swiss powerhouse claimed his spot in a 56th Grand Slam quarter-final at the US Open.

He was joined in the last eight by compatriot Stan Wawrinka, who beat injured top seed Novak Djokovic for the third time in a Grand Slam when the Serb was forced to retire with a shoulder injury trailing 6-4, 7-5, 2-1.

Federer, who lifted the last of his five New York trophies 11 years ago, was merciless with Goffin, hammering the bewildered Belgian in a quick-fire 79 minutes, winning his ninth of ten matches in the one-way series.

Federer was playing for his 18th straight fourth-round contest at the tournament.

“Maybe he struggled a bit early on. But I found my groove after a while and was able to roll really. Never looked back.

“David wasn’t nearly as good as I expected him to be. He was struggling a little bit today. I was able to take advantage of it, and I think that’s the key.

“In a fourth round like this, if you can keep it nice, short, simple, you have to take them. I’m very happy.”

Goffin admitted he had little to offer in the early afternoon rout.

“As soon as you have a chance, you miss the forehand or you miss the backhand or an easy passing or easy attack. Then it gives him a lot of confidence for the next service game.

“He doesn’t give you the time to play.”

Federer lined up a last-eight date on Tuesday against Grigor Dimitrov, who knocked out Australian Alex di Minaur 7-5, 6-3, 6-4.

The 38-year-old Swiss has won all eight of their previous matches, losing only one set out of 18 between the pair.

“It’s a great moment to be at. It’s a great opportunity for both of us to be out here,” Dimitrov said.

“Hopefully we have a great battle and we can produce some great tennis.”

Wawrinka went through as he defeated Djokovic for the fourth tie at a Grand Slam, a hoodoo which landed him titles at Roland Garros 2015 and here a year later.

“This is never the way you want to finish,” he said. “I’m sorry for Novak, he’s an amazing champion and a good friend.

“I was able to keep my level tonight, I’m playing super-good tennis. I’m happy to be back (after a pair of knee surgeries two years ago this month)

“It’s been tough since the operations, but it’s amazing to be back this year at my level.”

“the 2016 final against Novak here helped me big-time, I know I have the game to beat him, I was feeling great tonight.

“Thee big matches are what you train for, I’m gonna fight to win more matches here.”

The 34-year-old Swiss ran off the first two sets with relative ease in just over 90 minutes, recovering with no drama after going down an ealry break in the seoond.

Wawrinka broke back in the seventh game and put the world No. 1 on the back foot with a second break for a 6-5 lead.

The Swiss took a two-sets-to-love lead on a second set point as Djokovic’s weak volley hit the net as the crowd roared in support.

Djokovic saw the trainer prior to the start of the third, who massaged the left shoulder. he retired after three games in the third.

Wawrinka now takes on on-form Russian Daniil Medvedev after the fifth seed beat German Dominik Koepfer 3-6, 6-3, 6-2, 7-6(2) sealing victory after two and a half hours on his second match point.

Medvedev won the Cincinnati Masters title in the pre-Open run-up after reaching finals in Washington and Montreal; he is into his first career Grand Slam quarter-final.

But bad blood from a match in the previous round when he was shown giving the finger to the crowd after fans got on his case for snatching a towel in anger from an Open “ball-man” lingered on in the latest win.

During jeering at the post-match interview on court the 23-year-old turned the negative momentum as he had don 48 hours earlier.

“I’ve been playing really well on hardcourt,” the winner of five titles on the surface said.

“But I was down a set and 2-0, I had a pain in my shoulder after taking as many painkillers as I could.I thought I’m not gonna play.

“You guys being all against me, you gave me so much energy! And please guys, continue to do it.” he said with a large dose of sarcasm.