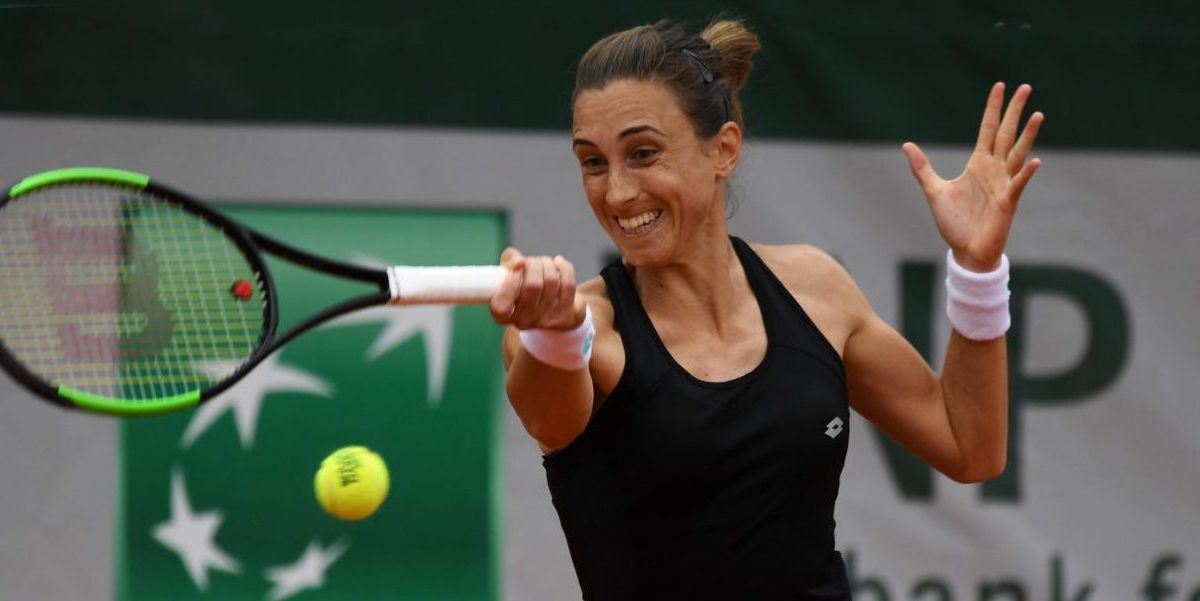 Roger Federer won the generation game on Friday at the French Open, defeating the son of a player who was active on the Tour when the Swiss got his start two decades ago.

But the shock of the day was in the women’s draw  Croatian Petra Martic knocking second seed Karolina Pliskova out in the third round 6-3, 6-3.

The win was the first for the 31st-ranked Martic who last beat a Top 10 opponent at a Grand Slam in 2012.

“For sure this this was one of my bigger ones,” Martic said of the struggle.

Back at the men’s tournament , the 20-time Grand Slam winner stepped onto court at Roland Garros looking  the business as he  prepared to start his 400th match at a Grand Slam, a record he holds alone among both men and women.

The elder Ruud, who was ending his career in his early 30s, had recalled a practise session back in the day with a rising teenaged Federer – limited info he passed onto his son..

“I enjoyed the match. I thought it was tough, even though I had a good run there for a while,” Federer said.

“It’s very important for me to know  that I can run through a set and a half and just take care of business. It gives me confidence for the next match. That’s for sure.”

Federer got to work in the opening set as he claimed it in 38 minutes with two breaks and had raced to 5-0 in the second before Ruud had a chance at a game.

With the third seed leading two sets to love, it looked like just a matter of time before Federer completed his job.

But Ruud rose to the occasion on the Lenglen showcase court, taking the third set into a tiebreaker and forcing Federer to a third match point before it finally ended. Victory took just over two hours, as the seed moved through on an overhead smash.

“The third set could have gone either way. He had chances early, then later, and then again after,” Federer said of Ruud.

“It was nice to see him hang in there. I can see why he’s going to be good in the future. He’s got a great attitude, very calm, very quiet, maybe very Norwegian, I’m not sure.”

Rafael Nadal made sure lightning didn’t strike twice on the 10-year anniversary of his loss in the third round to Robin Soderling,one of only two defeats the 11-time champion has ever taken here.

“It  happened that in the first set I played unbelievable, then I had a good second set, too,” Nadal said.

“in the fourth, of course I had to fight again, and I think I increased a little bit again the aggressivity, and that was, at the end, the key.”

Nishikori advanced with 48 each of winners and unforced errors in the marathon.

French 37-year-old wild card Nicolas Mahut lost to Leo Mayer 3-6, 7-6(3), 6-4, 7-6(3). The end of the match was emotional, with Mahut’s young run running onto the court to hug his tearful father and Mayer looking with tears in his own eyes.

Croatian Martic pulled off the biggest upset so far at the Open, knocking Karolina Pliskova out in the third round 6-3, 6-3. The victory in 95 minutes put Martic into the WTA lead with 14 clay victories, with Rome champion Pliskova unable to make an impression on the day.

The Czech still leads the Tour with 29 overall victories so far in 2019; she had reached the quarter-finals at seven of her last 10 Grand Slams, the best of any woman player.

Her third-round exit guarantees that Naomi Osaka will remain No. 1 at tournament’s end under any possible scenario; Pliskova was the last player with a chance to displace the Japanese atop the table.

The win was the first for the 31st-ranked Martic who last beat a Top 10 opponent at a Grand Slam in 2012.

“For sure this this was one of my bigger ones,” Martic said of the struggle.

“But I have bigger goals than that, and I hope I can just continue this way”

“The key was to focus on my game and try to dictate instead of letting her dictate, which is her biggest strength. At times it was difficult, especially when she broke me and when she got a few winners, which she’s known for. I’m just happy that I managed in the end to hold my nerves and to finish it off.”

“I had some chances in a couple games near the end, she just made it difficult today for me.

“She has the kind of game which you don’t feel good about, I think she played well.”

The Spaniard came in with a perfect 5-0 record in Paris third-round matches but a 1-5 mark against her Ukrainian opponent; she’s now 27-5 at the tournament.

“I am very pleased about this match,” Muguruza said. “We’ve played many times, and the last times she has beaten me.

I’m very happy about the win.” Latvia’s Anastasija Sevastova had to work for more than three and a quarter hours to eliminate Belgian Elise Mertens 6-7(3), 6-4, 11-9, surpassing her best previous Paris performance by a round.

Konta, 28, continued her fine clay-court season with a 6-2 6-1 late-evening victory on the new Court Simonne Mathieu.

Despite suffering sickness this week, the 26th seed broke serve five times to seal an impressive win in 54 minutes.