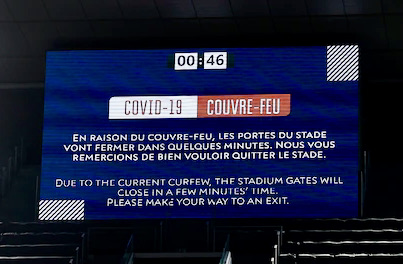 Novak Djokovic relived his Australian Open lockdown drama in Paris last night as his match against Italian Matteo Berrettini was delayed when fans refused to leave the arena to comply with a curfew order.

Djokovic was leading two sets to one, and up 3-2 in the third when at 10.45pm fans were asked to leave meet the 11pm city-wide lockdown.

As many as 5,000 fans became angry at the curfew order to have to leave Roland Garros, with many chanting: “We’ve paid, we’ll stay.”

Play was stopped on Court Philippe-Chatrier and at 10:55pm both players packed their bags and walked off down the tunnel while fans jeered.

Previously, Paris had been subject to 9pm curfew, with all night games taking place without fans.

A change in the rules had pushed the curfew back to 11pm, allowing fans to watch the start of the match – but not the finish.