Fake it ’til you make it: AO Men’s Sunday round-up 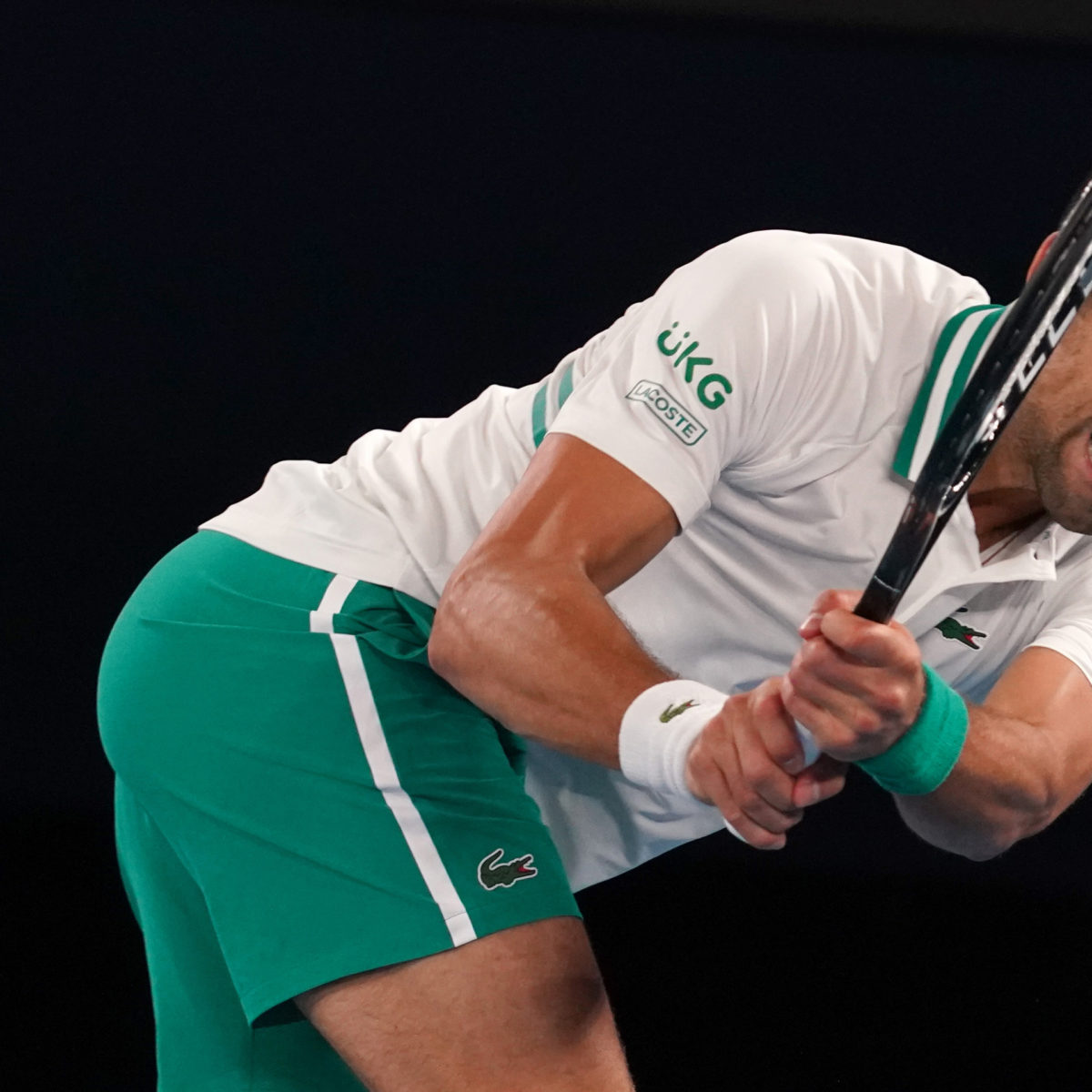 Picture-of-health Novak Djokovic made a miracle recovery from what he had claimed was a serious abdominal muscle tear to reach the quarter-finals of the Australian Open on Sunday 7-6(4), 4-6, 6-1, 6-4 over Milos Raonic.

The eight-time Melbourne winner has spent the previous 48 hours playing up his distress after outlasting Taylor Dent in five sets in the previous.

The top seed went so far as to suggest he might not be fit enough to front up against Canada’s Raonic, whom he now owns 12-0.

Djokovic was also playing the diva card in the hours running up to match time, complaining when filming began of his training sessions,

He went on the whinge later during the first set complaining about snappers sitting in empty spectator seats in the COVID-empty Rod Laver arena.

Both grievances were quickly dismissed by officials.

Djokovic wrapped up proceedings in just under three hours to set up a quarter-final with German Alexander Zverev, a winner over Djokovic’s fellow Serb Dusan Lajovic 6-4, 7-6(5), 6-3.

Any alarm bells for Djokovic were silenced early in the match, with the Serb winning the tiebreak opening set to establish his standard superiority over Raonic.

Despite 26 aces off the big Canadian’s racquet, Djokovic motored ahead to the win.

Zverev took almost two and a half hours to advance over Lajovic, throwing down 15 aces and breaking four times.

” I’m in the quarter-finals of a Grand Slam, so I’ve gotta to be doing something well,” Zverev said.

“I’m looking forward to what’s ahead: the toughest matches I think are still ahead of me.

“This is Djokovic’s favourite court at his favorite tournament. To have a chance against him, you have to be playing extremely well – playing aggressive tennis and being the one that dominates”

Grigor Dimitrov subdued third seed Dominic Thiem to score the biggest upset so far at the crowd-free event, with the Bulgarian scoring a 6-4, 6-4, 6-0 knockout.

Thiem, the reigning US Open winner, admitted that he was somehow deflated and fatigued after winning a five-set thriller in the previous round over Australian Nick Kyrgios.

The Austrian was bullied around the court by Dimitrov, who tested positive for COVID-19 last June after competing in Novak Djokovic’s ill-conceived Adria Tour of the Balkans.

The Open is being played without fans until at least Thursday due to an emergency lockdown in Victoria after 13 positive virus tests popped up at an airport quarantine hotel – enough to shut the entire state down.

Dimitrov secured his unexpected win over Thiem with 10 aces out of 25 winners in just over two hours in an empty stadium.

“I think the fact that I was able to keep consistency throughout the whole match was the key,” Dimitrov said.

“It was very strange the first couple of games, but Dominic and I have known each other a long time, practised a lot against each other.

“We know each other’s games very well, so I think we were both aware of how we wanted to play that match.”

Dimitrov will on Tuesday face the ultimate outsider in Russian qualifier Aslan Karatsev, a winner over Canada’s Felix Auger-Aliassime 3-6, 1-6, 6-3, 6-3, 6-4.

The 27-year-old journeyman ranked 114 is making a big showing in the first Grand Slam main draw of his career, with an upset win over eighth seed Diego Schwartzman his biggest accomplishment.

He is the first Grand Slam debutant to reach the last eight since Alex Radulescu at 1996 Wimbledon; the last qualifier to get this far at a major was Australian Bernard Tomic at 2011 Wimbledon.

Karatsev brought his game to his canadian opponent, turning the tide of what had looked to be a losing effort.

But after dropping the first two sets, he didn’t lose serve again as he completed the miracle reversal.

“I found the rhythm in the third set and said: ‘Okay, I would keep playing and go a bit far to the return and make him play more
balls.

“I think that was the right strategy. This was a big win from 2-0 down.

“Emotionally it was tough, a good feeling.”