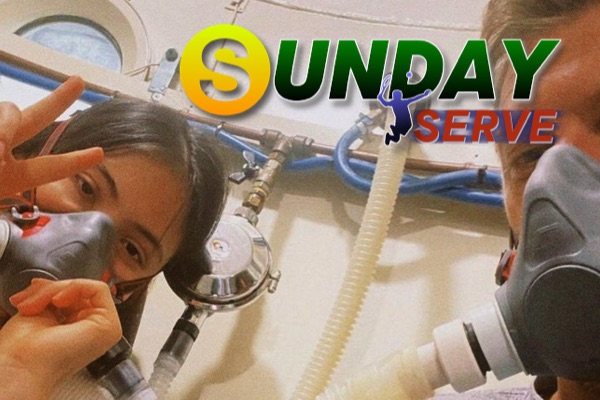 EMMA Raducanu has taken to an oxygen chamber in her bid to be fit for Wimbledon in two weeks time.

The British US Open champion says she is “leaving no stone unturned” after an abdominal injury saw her withdraw from her first round match against Switzerland’s Viktorija Golubic in Nottingham last week.

Raducanu, 19, took painkillers in an attempt to continue, but eventually had to admit defeat.

“Something didn’t feel right,” she said in her post match interview.

Raducanu then revealed that she had been diagnosed with a side strain and a further scan showed there was no long-term damage.

She took to Instagram in Thursday to share a photo of herself inside an oxygen chamber with the caption: ‘We’re trying, no stone left unturned”.

It is hoped the oxygen treatment will accelerate her recovery.

While she will miss next week’s WTA event in Birmingham, she is likely to enter the Rothesay International in Eastbourne – the traditional warm-up event for SW19 – the following week.

Evert said the lack of women’s matches scheduled for the night session was a mistake.

Only one women’s match was scheduled for the night session during the Open with Mauresmo criticised for that call.

“I think one big mistake was the night match,” Every said.

“It was all men. I think there was one women’s match, it was all men. That’s not right. We have equal prize money, we should have equal time. I wish she would have gone to the rubric of the US Open and looked at what they do.”

Mauresmo had said the men were getting more night sessions because their matches were more appealing.

And the commercial facts are there … men’s tennis does attract more viewers.

WIMBLEDON has announced that prize money for this year’s tournament will be a record £40.3 million.

The winners of both the men’s and women’s singles tournaments will each be awarded £2m, which is less than the 2019 prize of £2.35m.

But the Covid lockdowns, the cancellation of the 2020 edition and the fact 2021 operated with a reduced number of spectators, has undoubtably had an impact.

Looking at be total amount offered, well, that’s about five per cent more than in 2019.

There has also been a 40 per cent increase in prize money awarded to wheelchair tennis.

First round winners will now receive £50,000 and £62,000 will be given to those who get past three qualifying rounds.

STICKING with Wimbledon and the host broadcaster the BBC, anchor presenter Sue Barker has announced she is to retire from their Wimbledon coverage after this year’s event.

The BBC said: “What a wonderful time I’ve had working on some of the biggest sporting events around the world. I will miss it terribly but after 30 years I feel the time is right for me. I’ve worked with the best of the best.”

Great job Sue and best of luck in your retirement.

As one commentator put it: Wimbledon without Sue Barker is like strawberries without cream.

RAFA Nadal is still very hopeful he will play Wimbledon in two weeks as he recovers at home in Mallorca after treatment on his injured left foot.

Nadal said last week his foot was “asleep” due to injections during his win over Casper Ruud in the final at Roland Garros.

The Spaniard went to Barcelona for “pulsed radio frequency stimulation” treatment, a spokesman for tNadal told the media.

The treatment apparently means the nerves around the area of Nadal’s injury will be “temporarily numb”.

“Rafa is already at home and will spend three or four days doing normal, maintaining, physical activity. Depending on the effect of the treatment, and as long as it’s positive, he will later return to training on the court,” the spokesman said.

“We don’t rule out a second treatment being carried out in the next week.”

Nadal has suffered from a problem in his foot, called Muller-Weiss syndrome, for some time.

NADAL was defended by the World Anti Doping Agency last week after receiving criticism from French cyclist Thibaut Pinot, who said the use of drugs to combat the foot injury were banned in other sports.

“The methods used by Nadal are simply prohibited in my sport, which is unfortunately so decried. Here is a little more precision on the sadness of my tweet,” Pinot wrote.

But WADA’s Olivier Niggli told Swiss channel RTS the injections used “are not on the list of prohibited products (by AMA), since it is estimated that they do not improve sports performance and that they are not harmful.”

BRITISH player Tara Moore took to Twitter on Friday to insist she had never knowingly taken a banned substance and added she is looking forward to proving that she is a “clean athlete.”

Wile competing at a WTA event in Bogota in April Moore provided samples that were found to contain banned substances.

“I have never knowingly taken a banned substance in my career. I’m investigating how the positive result could have occurred and look forward to proving that I’m a clean athlete.

I’m deeply saddened by the provisional suspension and hope to be back on the court as soon as possible,” Moore said in a statement on Twitter.

AND finally … a Wimbledon warning?

Andy Murray showed he is still a force on grass with a stunning g 7-6(4), 6-3 win over Stefanos Tsitsipas in Stuttgart last week.

Murray praised the crowd for giving him a bit of extra energy in the match.

“It was an amazing atmosphere,” Murray said in his on-court interview.

“I felt like I had very few chances, but when he was creating chances on my serve, I stayed strong. I played a really solid tie-break and in the second set, once I was in the rallies, I felt like I was dictating a lot of the points. It was a good performance.”