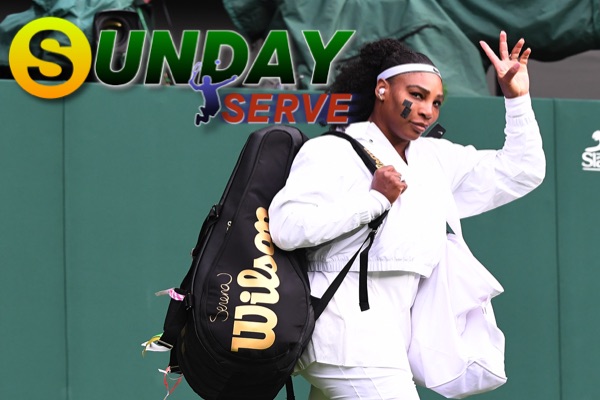 But one seven-time champion was missing.

Despite competing at this year’s event, losing in the first round to Harmony Tan, Serena Williams was nowhere to be found. Why?

Williams gave the ceremony a miss because Wimbledon would not agree to her outrageous demand for five courtesy cars to be used during the tournament.

Most players are given one courtesy car, with some of the top-ranked players maybe getting two cars.

A Wimbledon source told the London Telegraph, Williams wanted cars for her, for her husband, her sister, her coach and her mother.

“She wanted to use the cars for the whole two weeks because that’s what happens at the other grand slams,” the source said.

“She was told that was not possible because they had to be used by the other players. She was not happy.

“Maybe that’s why she refused to take part in the centenary parade.”

Journalists asking after her were told she had gone home.

But home wasn’t back in the US, as she was spotted at a Rolling Stones concert in London days later.

As one wag put it: Car-owner-virus!

THE Taipei Times in Taiwan this week published an opinion piece questioning how hard it is to get a ticket to the All England Championships.

A debenture gives the holder the right to a premium seat each day for five straight tournament years.

But getting hold of a debenture ticket? Good luck.

The other option is to wait in line, very British.

A waiting line in 2017 was reportedly 7,000 people long and the line for this year’s event started on June 17, three days before the first game.

Good luck there as well.

So other Slams, is it easier or harder?

The US Open is the easiest, and even the French and the Australian are easier.

All of those have have systems that help fans access tickets, and – importantly – restrict the ability of profiteers and touts on resales.

Wimbledon? The key here is how it is set up – as a private members’ club.

The All England Lawn Tennis & Croquet Club is one of the most exclusive clubs in the world, with a limit of only 500 members.

Wimbledon has long stated it wants to be accessible to as many people as possible.

Yet tennis is still an expensive and exclusive sport in the UK, compared to many other countries.

There is still an upmarket squaff of elitism about the whole two weeks – something it has to address if it want to really be accessible to all.

WIMBLEDON officials had been urged to look at bringing in a ‘Lucky Loser’ rule after Nick Kyrgios was gifted a spot in the final after Rafael Nadal withdrew from their semi-final through injury overnight.

Kyrgios and Nadal were set for a semifinal clash on centre court before Nadal retired injured from the tournament after beating American Taylor Fritz in a tough five-set quarterfinal.

That gave Kyrgios a stroll into the final against Novak Djokovic.

“It happens so rarely, but I still think it’s worth exploring. When a player withdraws this late in a Grand Slam or before a major tour final, the beaten player should be able to take the slot,” Clarey tweeted.

Fritz himself has downplayed the suggestion, saying he “doesn’t deserve” to be in the semi-finals.

‘[I’m] not looking for handouts, if I couldn’t beat him [Nadal] then I don’t deserve to be in the semis … simple as that,’ he said.

Nick Kyrgios is only the third player in history to reach a Grand Slam singles final by a walkover.

BOOING a politician? For sure. But booing a player at Wimbledon for blowing kisses to the spectators after winning a semifinal?

Many dislike Novak Djokovic for his stand on Covid and refusing to be vaccinated. Many thought his behaviour in trying to circumvent Australian law in January was wrong. And he failed.

Or will it be a case of the fans of both finalists today with biggest boos – as both have plenty of baggage – winning out?

Can’t we move on and just let them play tennis.

IF Djokovic is to beat Kyrgios on today’s mens final he will have to overcome the quick motion serve of the Australian.

The Serb has lost twice to Kyrgios in recent times and will hope his backroom team will have something in the serve to give him the edge.

The ATP’s serve rating – an analysis that takes in first serve percentage and points won, aces and double faults – ranks Kyrgios as the sixth-best exponent since serving records have been kept in 1991.

Kyrgios’s game is dangerous on the wearing grass courts, where ehe wins 91% of service games.

And with a tournament-high 120 aces at 25 per match en route to the final, that could spell trouble for Djokovic.

“That second serve is arguably a bigger weapon because Nick’s confidence and willingness to switch things up, no one else does that when really they should be trying it. He’s got the game to really worry Djokovic and really go all the way,” he told the Melbourne Age this week.

Elena Rybakina, born and raised in Moscow, but bizarrely allowed to play at Wimbledon because she is now a citizen of the Russian satellite state of Kazakhstan.

Didn’t even switch to the Kazakhstan Tennis Federation until 2018.

Literally – French player Paul Inchauspe was playing in the junior doubles final with Fabriel Debru against Americans Sebastian Gorzny and Alex Michelsen and took one for the team in the ‘nether’ regions during the match as Gorzny smashed a return straight at his opponent.

The match was screened live on BBC TV and saw Inchauspe stagger to the back of the court in agony as one BBC reporter said: “Ow… ow, ow, that is really going to hurt, goodness me.”

Gorzny and Michelsen secured a 7-6(5), 6-3 victory to life the junior Wimbledon doubles title.