Novak Djokovic a vegan? Or something more complex. We’re not sure here at Sunday Serve what the Serbian’s diet is but records show it is possible to be gluten-free and the world No.1.

Djokovic, we believe. follows a plant-based diet but doesn’t like labels or being called a vegan. Remember, the 32-year-old Serbian has won 16 Grand Slam singles titles, the third best record in men’s professional tennis behind Roger Federer (20) and Rafael Nadal (18).

Almost a decade ago, Djokovic discovered he had a gluten allergy by pressing a piece of bread against his stomach with his arm, on the advice of a nutritionist, and observing the immediate loss of strength in that arm. He later learned he had an intolerance to dairy and was sensitive to refined sugars.

This shocked Djokovic, whose family, bizarrely, own a pizza restaurant, and who claims he ate so much bread growing up, that he would even have a side of bread with his pizza.

Djokovic not only decided to change his diet based on his food allergies, but also because of his low-energy performances. During tennis tournaments, he felt exhausted and would suffer from breathing problems, vomiting, blurred vision, and an inability to handle heat. 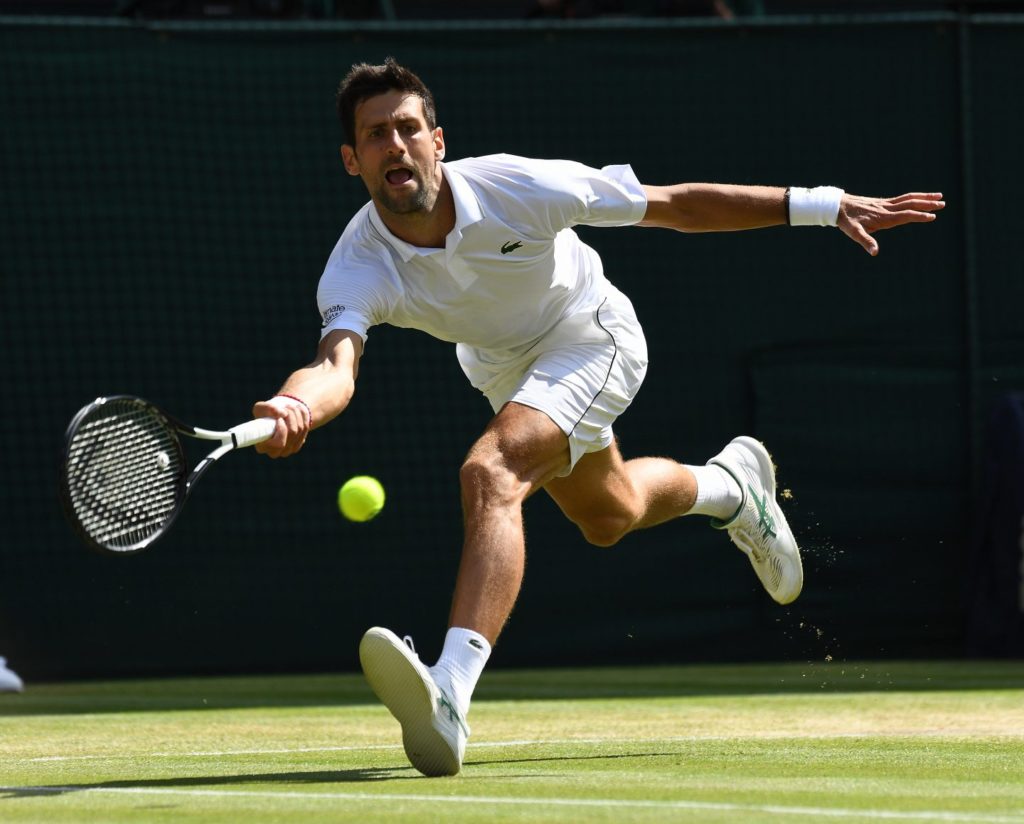 After changing his eating habits, he says he has better recovery and improved overall health. His plant-based diet extends beyond the tennis court. He opened a vegan restaurant with his wife in Monte Carlo and was an executive producer of the recent documentary, The Game Changers, which examines the connection between plant-based eating and sports.

But what exactly does Djokovic eat?

A big feature of his healthy diet is that Djokovic himself cooks as much as possible, even when staying in hotels – he’ll insist he stay somewhere with a kitchen. He also likes to buy organic produce and avoids processed foods and refined sugars completely.

Djokovic will start his day off with a ‘Power Bowl’, which he describes in his book, Serve to Win as having a base of gluten-free grains, nuts, plant milk, fruit and coconut oil.

Djokovic might opt for a smoothie in the morning. He has tweeted about his favourite smoothie recipe consisting of banana, plant milk, cinnamon, chia seeds, protein powder, flax seed and cacao powder. 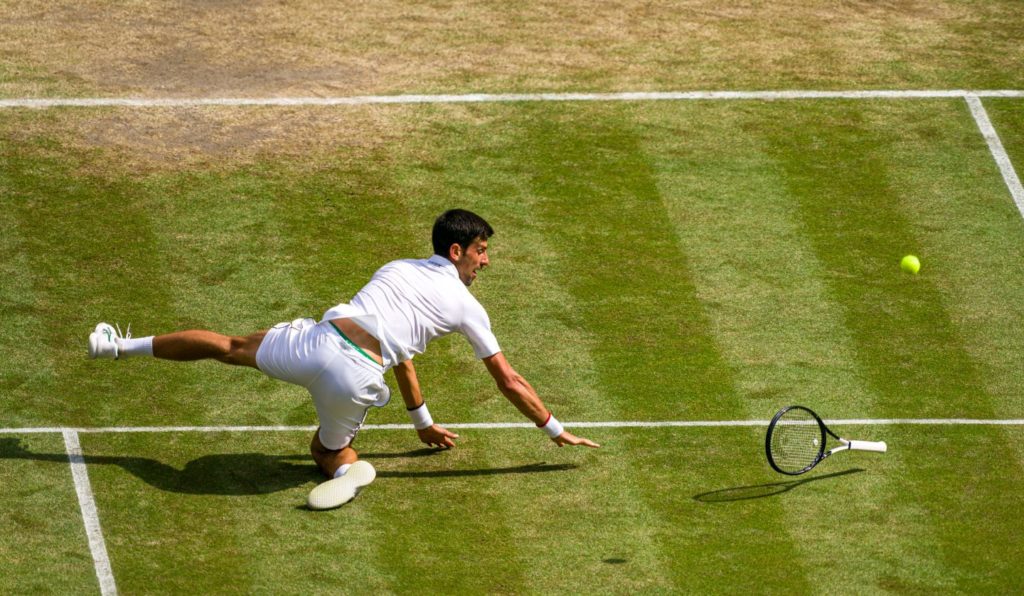 For his main meals, Djokovic will eat nutrient-dense carbohydrates such as brown rice or quinoa, paired with veggies such as roasted peppers, broccoli, cauliflower, carrots and green beans. He’ll often go for a gluten-free pasta with veggies to energise himself and also eats plenty of beans and lentils.

Djokovic is also a fan of soups and salads, such as carrot ginger soup and kale salad, and can be seen drinking various green juices on social media. Fruits are also consumed, but not to the extreme, as he doesn’t want to go “overboard” with the sugars.

For snacks, Djokovic will indulge in hummus, crackers with avocado, nuts, or an apple with cashew butter. Being a gluten-free vegan and the No.1  tennis player in the world may seem impossible, but Djokovic is living proof that a plant-based diet is the key to his success. 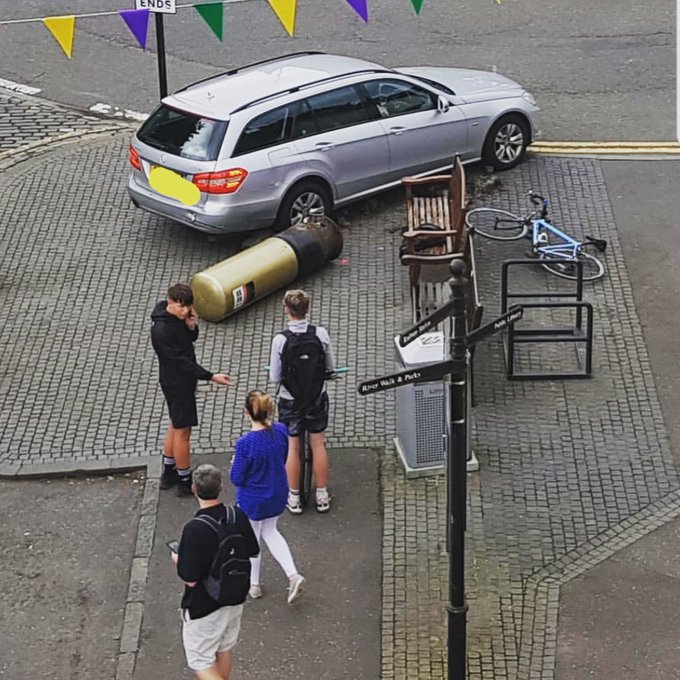 IT may seem a slow week in tennis, we move to the US ahead of the Flushing Meadows classic next month, but the ‘big’ news of the week was about a post box.

Not any post box, but a golden one, dedicated to Andy Murray after he won Olympic Gold in 2012.

The post box has stood in Dunblane town centre in Scotland, since Murray’s Olympic triumph.

Police this week confirmed that a Mercedes car had struck the box in a “low-speed collision”. The female driver was apparently not hurt.

Work began the following morning to replace it.

Mum Judy expressed sadness at the incident on twitter, tweeting “oh no” with a picture of the box on the ground. 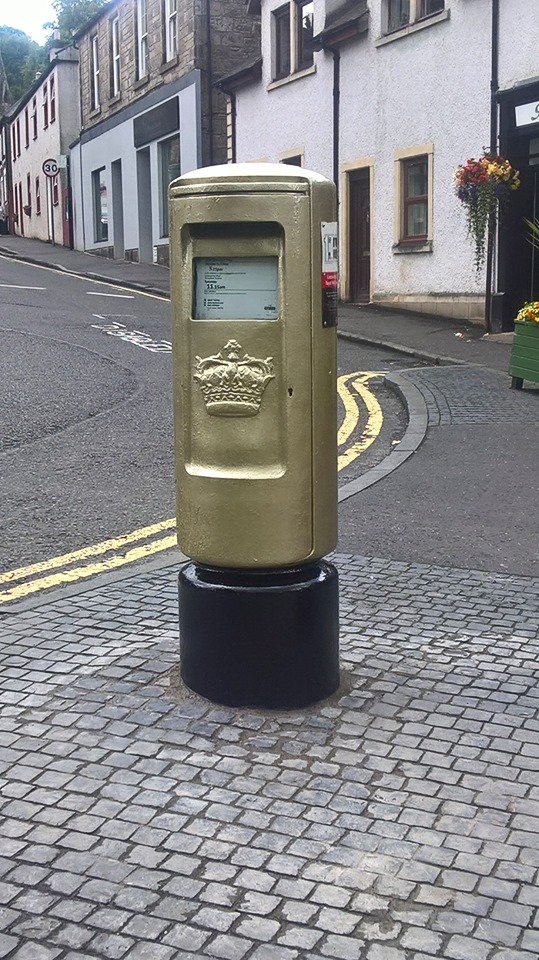 WITH the Tokyo Olympics set to begin in exactly 365 days, reigning US Open and Australian Open champion Naomi Osaka has her eyes on finishing atop the podium on home soil.

The Japanese No.1 will no doubt have all eyes on her when international sport descends on the Games of the XXXII Olympiad, Tokyo 2020 next summer – the return of the Summer Olympics to Tokyo for the first time since 1964, and the fourth Olympics overall to be held in Japan.

“I do think about winning gold and it would mean a lot if I was able to achieve that and win a gold medal because you dream of such moments,” Osaka told ITFWorld in an interview.

“When you are a kid, you don’t dream of silver or bronze. Even though winning silver or bronze is an incredible achievement, every athlete wants gold and it has always been something that I have imagined.

“Winning gold would be the biggest thing I would have achieved in my career, although in some ways that is simply because of timing. I contest Grand Slams every year but an Olympic Games is only once every four years so there are not many opportunities to become an Olympic champion.” 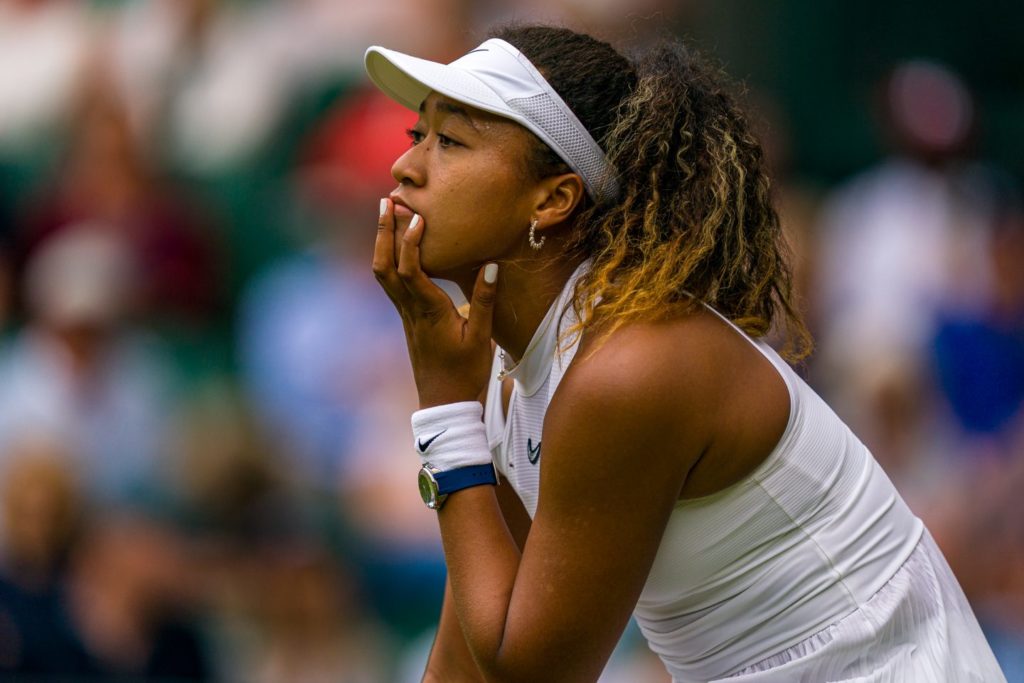 SRDIAN Djokovic, Novak Djokovic’s father, believes the five-time Wimbledon winner will post historic numbers and probably win Wimbledon 10 times.
In an interview with Serbian television, the elder Djokovic said: “We’re only halfway there, you know. There will probably be twice as many (Wimbledon championships).

“I am proud and the majority of Serbia are proud and everyone from this region are proud of him.”

“His wish is that by the end of his tennis career, which will last several more years, he will surpass the records of Nadal and Federer,” Srdjan Djokovic said in a video interview posted by the Djoker Nole YouTube channel.

TENNIS superstar Venus Williams stopped in Atlanta last week to help mould the next generation of tennis players when she hit the courts for a clinic at the South Fulton Tennis Center.

The player hit back-and-forth with nearly 100 kids enrolled in summer camp at the center – in an effort to inspire the up and coming athletes as part of the US Tennis Association’s Net Generation organisation.

“I love to be out here with the kids,” Williams said. “It keeps me motivated to keep going. Hopefully, we’ll see some future stars come out of this, but more than anything – a lot of success stories by using sport.”

Williams said organisations like the Net Generation gives kids the chance to be exposed sports and feel good about themselves. 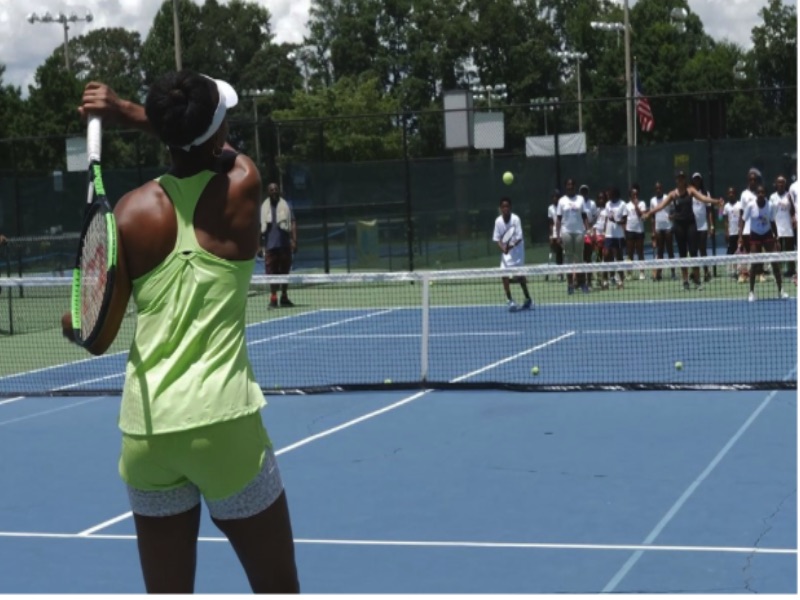 LESS a fortnight after having the most successful week at a Grand Slam event of her career, Alison Riske marked another huge milestone, this one personal — her wedding day.

The Pittsburgh native, who also won her second career WTA singles title earlier this year on grass at s-Hertogenbosch, Holland,  has risen from outside the top 60 to World No.37 this season. 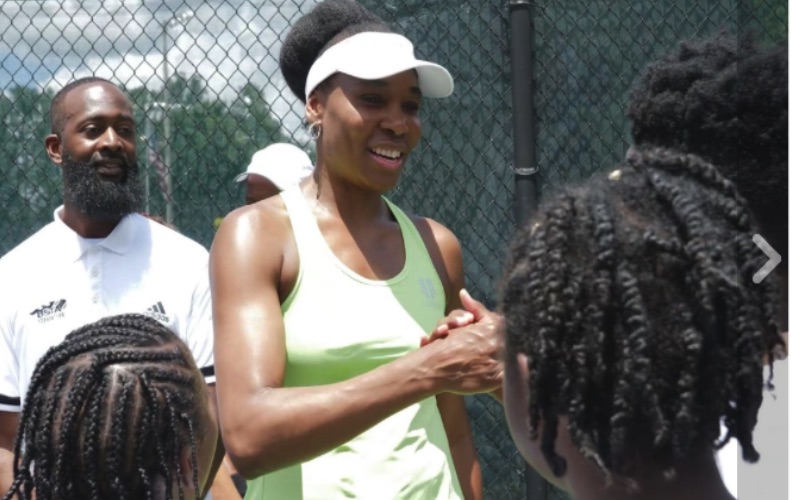 NICK Kyrgios has often professed his love for basketball, and in Atlanta during a stop on the ATP Tour, he was able to test his skills against a Harlem Globetrotter.
Kyrgios is at the BB&T Atlanta Open in the USA, and was put up by the tour to do a skills session with Torch George of the Harlem Globetrotters.

The Aussie has said in the past that he “does not love tennis”, but he does love basketball and is an avid NBA fan, especially when it comes to the Boston Celtics.

“I don’t really like the sport of tennis that much. I don’t love it,” Kyrgios told The Independent in 2015.

“It was crazy when I was 14. I was all for basketball and I made the decision to play tennis. I got pushed by my parents and to this day I can still say I don’t love the sport. It is just crazy how things go.

“I just love basketball, I love the sport. I always have.”

With George in Atlanta he tried spinning the ball on his finger, did some trick shots and dunks on a small hoop and the pair faced off in a game of HORSE. 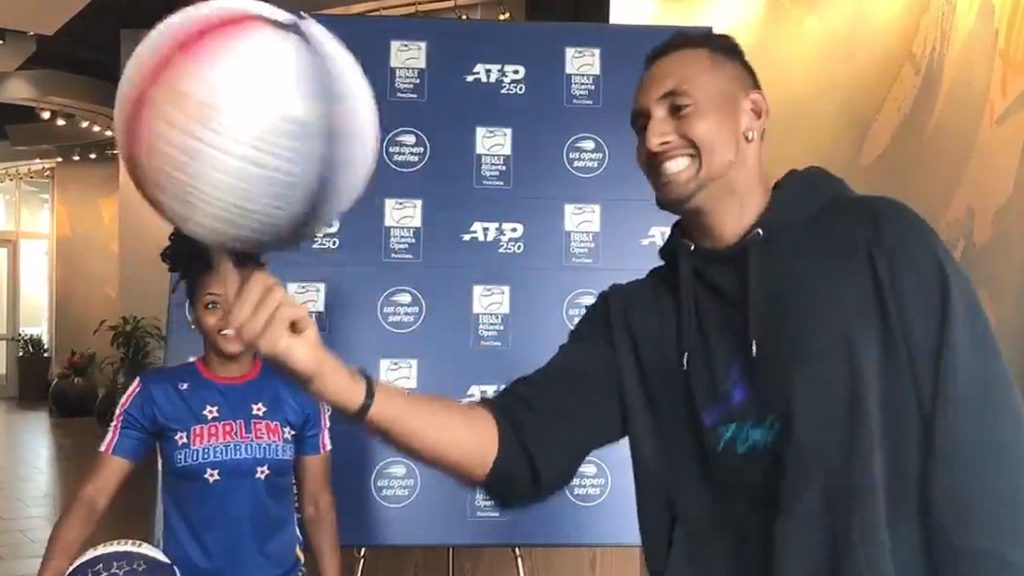 BERNARD Tomic is planning to take legal action over his Wimbledon fine. The 26-year-old has accused the Grand Slam Board officials of “mocking him” after his initial appeal was rejected.

The Australian was stripped from all of his Wimbledon first-round prize money – a total of £45,000 – for failing to meet the professional standards in his opener.

Tomic’s Wimbledon campaign ended in the first round after a 6-2 6-1 6-4 loss suffered in 58 minutes go Jo Wilfried Tsonga.

“A review of your historical record of misconduct at grand slams, never mind elsewhere, provides little justification for an adjustment,” Grand Slam Board Director Bill Babcock wrote in the decision letter, as published by The New York Times.

“In your case, Bernard, I am sure you would agree there is no historical evidence to give comfort to the theory that you can reform your behaviour.” Babcock added Tomic would be refunded 25 per cent of his Wimbledon prize money if he went without a sanction in his next eight Grand Slam tournaments.

AND finally… the new image altering app that is all the rage on social media threw up three interesting faces this week. Still going strong, well into their 70s. 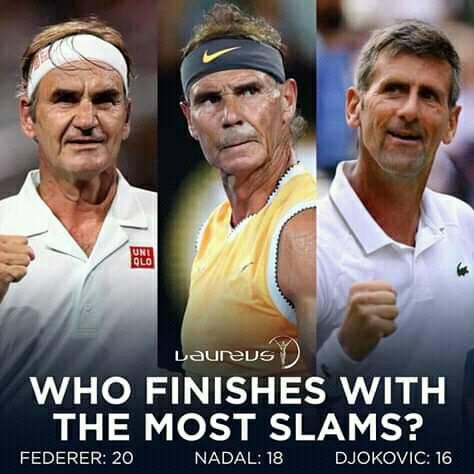 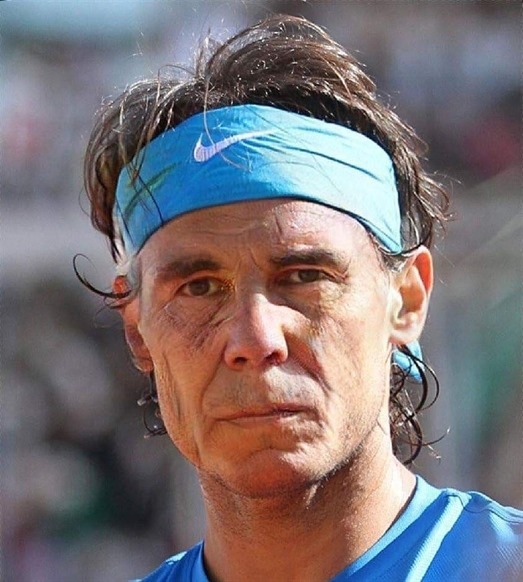