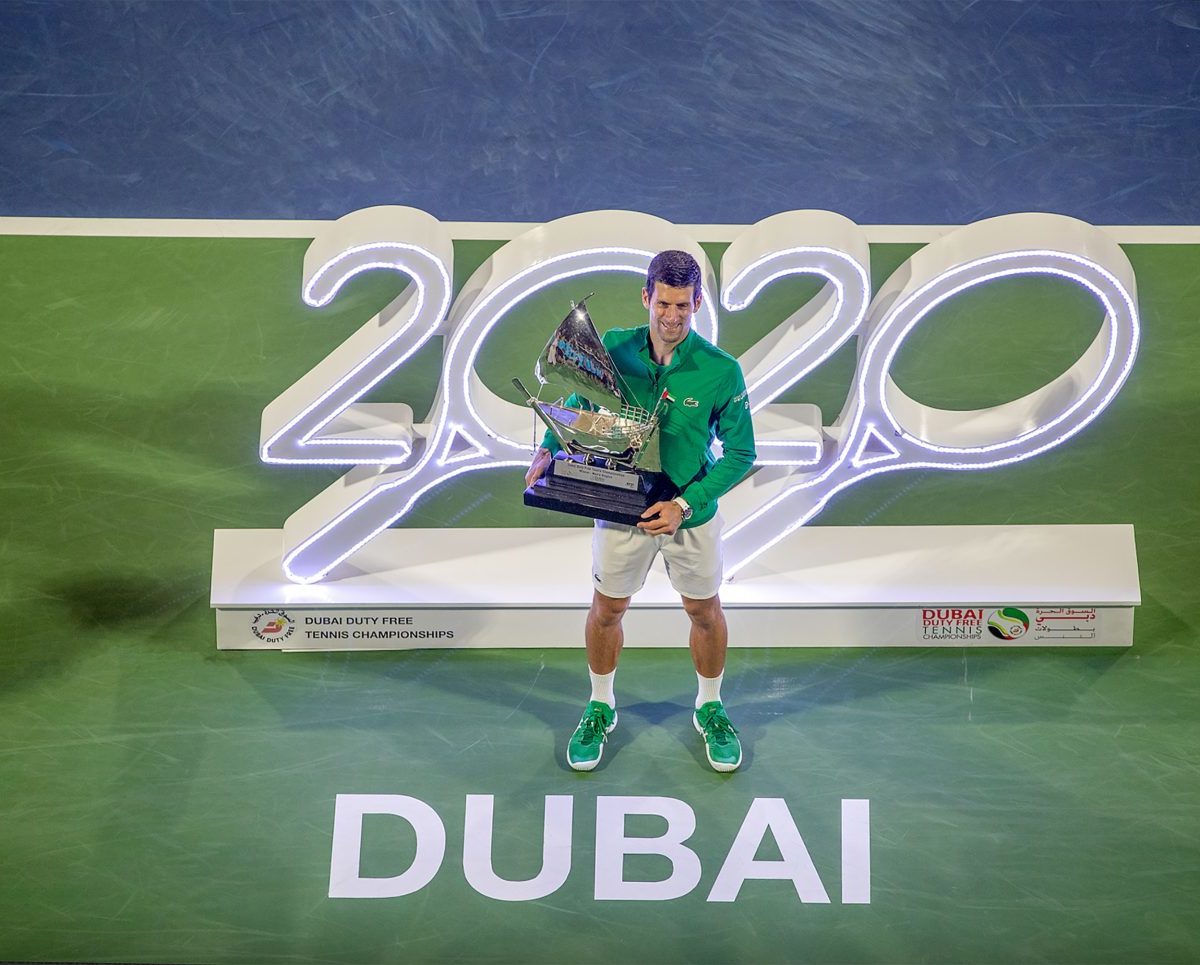 Novak Djokovic landed his 79th career title and fifth at the Dubai Championships on Saturday with a 6-3, 6-4 defeat of Stefanos Tsitsipas.

Defeat in well under 90 minutes was the second in a row here for the sixth-ranked Greek, who came to the emirate after winning the Marseille trophy last weekend.

Djokovic handed Tsitsipas a second straight loss in a Dubai final after the number six lost a year ago at this stage to Roger Federer.

He finished on a first match point after going up an early break in the second set, losing it and getting it back in time to serve out the win.

“I’ve had a great start to the season, I love playing on hardcourts, They’ve been my most successful surface so far,” he said..

“I’ll try to keep it going, I’m excited to play each match.”

Djokovic has also taken 2020 honours at the ATP Cup and Australian Open.

“It was close in both sets,” Djokovic said. “I’m most proud of my consistency this week, especially on shots from the baseline.”

“I was just a point from going out, I might not have been here,” Djokovic said.  “But it shows how quickly things can turn.

“I appreciate the moment, I’ve really played well in my matches this week. There were some ups and downs, but that’s normal.

“Tsitsipas is a player for now, much more than for the future,” Djokovic said. “He’s more than just a great player, he’s very charismatic and brings a lot to the game.”

Djokovic will stay number one on the ATP rankings on Monday to start a 280th week at the top.

Tsitsipas had to swallow more disappointment against the 32-year-old champion, who last played a Dubai final five years ago.

“It (defeat) happened again (in a final here),” the Greek said, “But it’s all a learning experience.

“it’s been a tiring week, that’s all I can say.

“I will just keep on trying to improve when I play top athletes like Novak. I can learn from my mistakes.”

The winner of the ATP Finals in November added: “It’s kind of disappointing trying so hard and much and not really getting the final result that you want.

“I would love to see myself holding that trophy. Of course, he gave more than me and he deserves it.”

Victory in less than 90 minutes marked the fifth trophy here for the Serbian world number one, who was awarded a “golden” visa by the UAE government and subsequently promised to return to defend his title in 2021.

The honour bestows a decade of residency in the tax-free emirate.

“Dubai has been a very important city in my career not just because of the tournament but because I’ve been actually coming as a tourist here and using this as a base for pre-season training,” he said.

“I really enjoy it. I can’t wait to come back again.”

Djokovic claimed his third trophy of 2020 after helping Serbia to the ATP Cup and winning an eighth Australian Open. The triumph was his 79th career title.

“I’ve had a great start to the season, I love playing on hardcourts, They’ve been my most successful surface so far,” he said. “I’ll try to keep it going, I’m excited to play each match.”

He added: “It was a little bit of a slow start from me. I was fortunate to hold my service games.

“He was very close to breaking my serve first three service games that I had in the first set. This has been one of the best starts of all seasons I’ve had. I feel great on the court.

“I’ve been playing great tennis on the hard court that is my most successful and preferred surface.