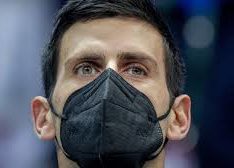 Novak Djokovic has taken social media to thank supporters in his first public message since being detained by the Australian authorities on Wednesday night.

Djokovic posted on Instagram: “Thank you to people around the world for your continuous support. I can feel it and it is greatly appreciated.”

Djokovic has been detained at an immigration facility in Melbourne after his visa was cancelled following scrutiny of the medical exemption he had secured to enter the country.

He has appealed the decision and now awaits a court hearing on Monday to discover his fate.

Two other players have since been told to leave the country by the border force officials as their medical exemptions also do not meet immigration law.

“The ABF can confirm that one individual has voluntarily departed Australia following ABF inquiries.

“We can also confirm that the visa of a third individual has been cancelled. This person has been taken into immigration detention pending their removal from Australia.”

One of the those is doubles player Renata Voracova, the other is currently unknown.