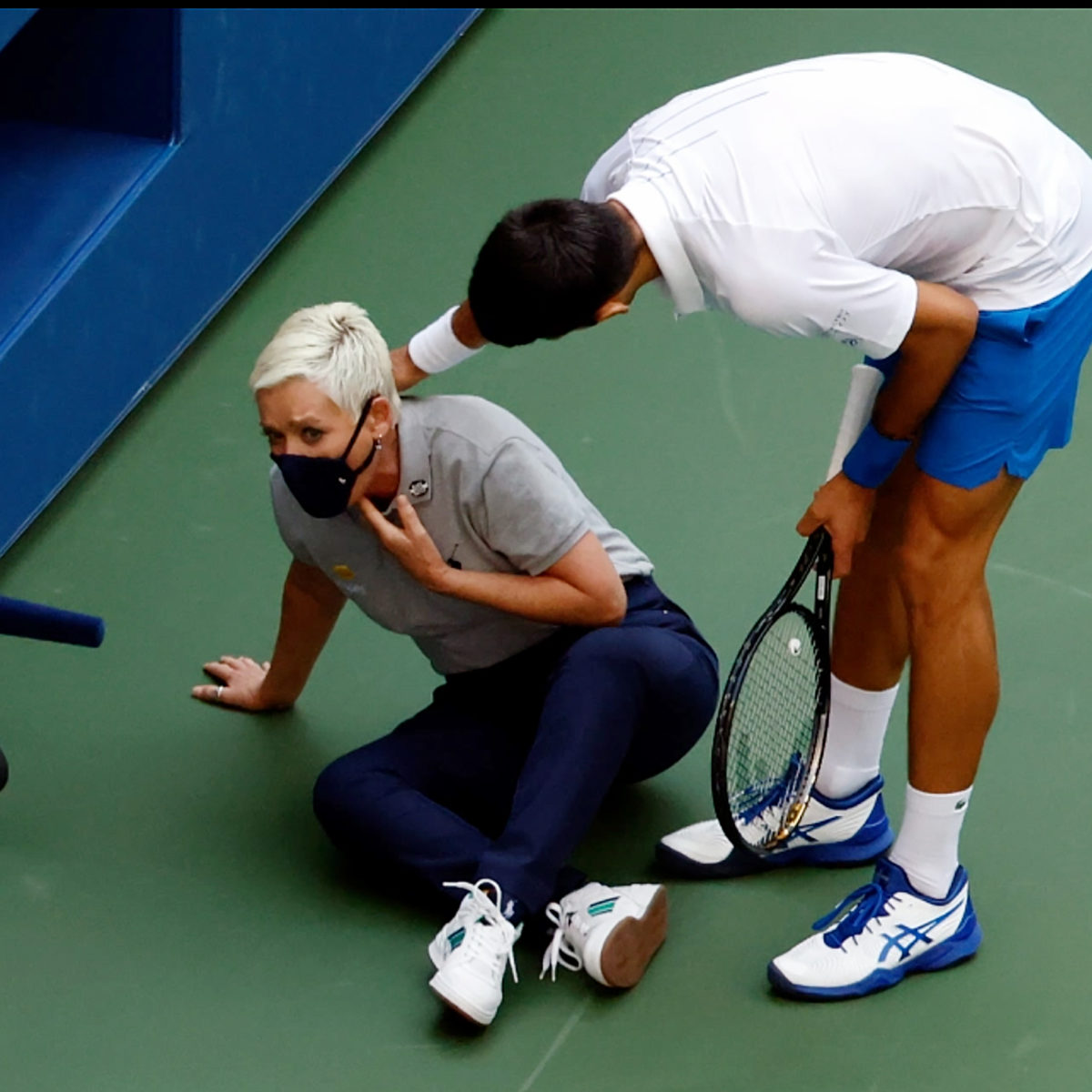 Top seed Novak Djokovic was sensationally disqualified from the US Open on Sunday in a dramatic incident after unintentionally striking a lineswoman with a loose ball.

The top seed and world No. 1 felt the full force of the rulebook as he was sent out of the grand Slam which was already missing two of his main rivals in holder Rafael Nadal and Roger Federer.

Djokovic accidentally hit a lineswoman in the throat slightly hitting a ball in anger at 5-6 in his fourth-round contest with Spain’s Pablo Carreno Busta.

He momentarily let his temper loose, with serious results which presented the locked-down, no-fan event with another crisis this troubled and unique edition.

When he eventually looked up and saw the damage as he prepared for what would have been the next point, Djokovic immediately went to comfort the woman, who quickly recovered.

He later spent 10 minutes arguing his side of the story with ITF officials, but admitted that he had to accept the decision as it was entirely his fault.

Tournament officials spelled out the sanctions on Djokovic:

“Because he was defaulted, Djokovic will lose all ranking points earned at the US Open and will be fined the prize money won at the tournament in addition to any or all fines levied with respect to the offending incident.”

Reports later said that Djokovic had left the tournament and would be fined for skipping the mandatory post-match media conference.

Djokovic stood a perfect 26-0 this season, with titles at the ATP Cup, Australian Open and Dubai before the long tennis shutdown due to COVID.

DQ’s are rare in the well-behaved sport, but the Djokovic incident is not the first for name players.

British hero Tim Henman was tossed out of Wimbledon for the same infaction a decade and a half ago while Denis Shapovalov suffered the same fate as he struck a chair umpire in Davis Cup in recent seasons.

David Nalbandian was evicted from the Queen;s Club final in London for kicking a courtside hoarding this then struck an elderly linesman in the knee while a Stefan Edberg serve in the late 1980s killed an unlucky linesman.

The Serb who has not lost any of his 26 matches this season had just been broken for 5-6 in the opening set against Spain’s Pablo Carreno Busta.

A frustrated Djokovic argned in vain for nearly 10 minutes on the Ashe showcase court to prevent the ultimate sanction.

The Serb shot the ball backwards without looking. with an official caught in the throat by the hurtling sphere.

The woman went down momentarily choking , but later was back on her feet.

Meanwhile, Carreno Busta took it all in from his changeover seat.

Djokovic had been bidding to narrow the Grand Slam title gap on leader Roger Federer and trailing rival Rafael Nadal.

Federer leads the all-time list with 21 while Nadal has 20. Djokovic came to New York with 17.

Main photo:- Novak Djokovic apologises to lineswomen he accidentally hit in the throat before being DQ’d Photo Prime video