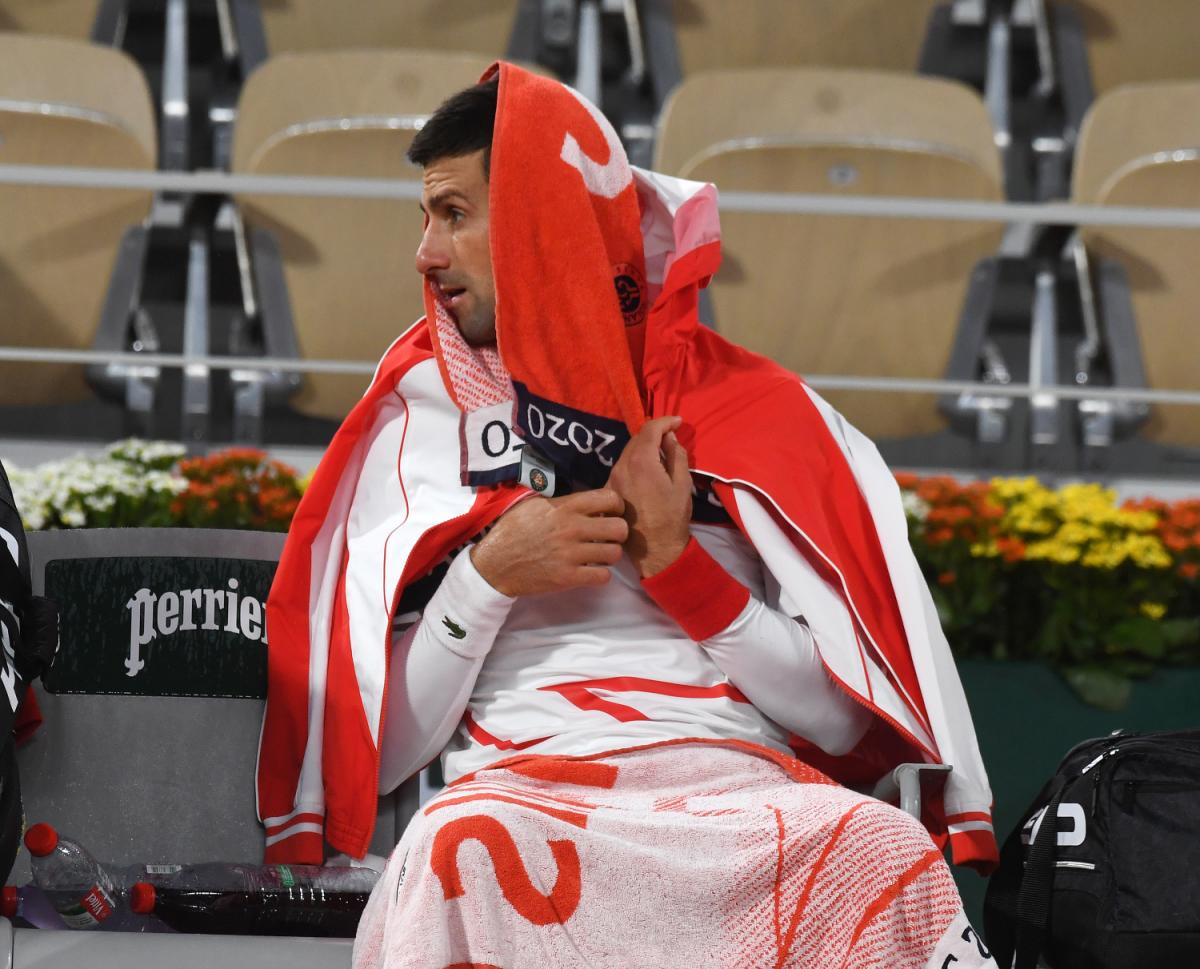 Novak Djokovic stopped play abruptly in the fourth game of his second set against Colombian Daniel Elahi Galan on Saturday, demanding that the showcourt roof be closed due to rain at the French Open.

The world No. 1  – who had been complaining for 15 minutes when mist began – later picked up indoors where he left off in the third round match, inflicting a 6-0, 6-3, 6-2 defeat to his lucky loser opponent.

Emergency repairs to the clay had to be made during the roof closing operation due to the damage from playing in the rain.

Top seed Djokovic who had dropped just 10 games in his first two matches this week, maintained his record of never losing a Grand Slam match to an opponent ranked as low as Galan’s 153rd.

He has achieved the fourth round for an 11th straight year at the event, equalling that Open record (alongside Nadal and Federer) in the minor statistical category.

Galan drew cheers nearly an hour into the match when he finally won a game after losing the first seven just a few minutes before play was stopped as he trailed a set and 2-1 with the fourth game already underway.

Karen Khachanov will be the next to try and stop Djokovic after the Russian defeated Chile’s Christian Garin 6-2, 3-6, 6-4, 6-2.

No. 5 Stefanos Tsitsipas advanced with ease as injured opponent Aljaz Bedene had to quit trailing 6-1, 6-2, 3-1 after rolling his ankle midway through.

The Greek winner worked for just 82 minutes before moving into the fourth round here for a second straight edition.

“Being able to compete in a second week gives me a lot of confidence, it feels great.” he said.

“I’ve been putting a lot of hard work in every single match trying to raise my level, play up to my expectations.

“I’m very glad to be where I am today. It’s a moment that I can reflect on and move on to the second week.”.

In another retirement scenario, Roberto Carballes Baena, winner in the previous round over ninth seed Denis Shapovalov, quit hurt to hand Grigor Dimitrov a 6-1, 6-3 victory. and a first-time meeting with Tsitsipas.

“Every time you get into the second week of a Slam, it’s special, regardless of the tournament you’re playing.” Dimitrov said. “I grew up on clay.”

Seventh seed Matteo Berrettini collapsed in a heap as a No. 186-ranked qualifier showed him the door, with German Daniel Altmaier producing a 6-2, 7-6(5), 6-4 stunner.

The 22-year-old from Kempen north of Dusseldorf, was one of two qualifiers (along with American Sebastian Korda) to reach the second week in Paris since 1998.

In addition. 239th-ranked Frenchman Hugo Gaston is also in the fourth-round mix.

Berrettinni could not believe the poor form which defined his defeat in two and a quarter hours.

Berrettini added: “I was struggling to find the right attitude, the right energy. I was nervous.

“When I tried to calm down, I was too calm. I was struggling every single aspect of the game.

Altmaier will next test himself against Spaniard Pablo Carreno Busta, who defeated compatriot Robert Bautista Agut 6-4, 6-3, 5-7, 6-4.

The German, with Russian-Ukrainian heritage is the fourth man to reach the round of 16 on his Grand Slam debut since 2000

Due to a run of injuries including shoulder and hip, his career progress has been slow.

“I was always believing that I can be here, I can perform good, I can play well and beat those guys,” he said.

“”I’ve been working really hard with my team to be in this position, to feel stable, to  play well and compete against the top guys.

“I always believed in this, so I think that’s why it’s happening at the moment.”

Roles were reversed when the pair played their previous match five years ago at the US Open which Anderson won in four sets..

Back in the day, the South African stood 14th while newcomer Rublev was ranked No. 198.

The seed managed 27 winners, and 16 unforced errors while never facing a break point in 93 minutes.

Hamburg champion Rublev won his eighth consecutive match to bring his season record – including January titles in Doha and Adelaide – to 28-6.

His next opponent will be Marton Fucsovic, who matched his fourth round at the Australian Open by defeating Brazilian Thiago Motiero 7-5, 6-1, 6-3.