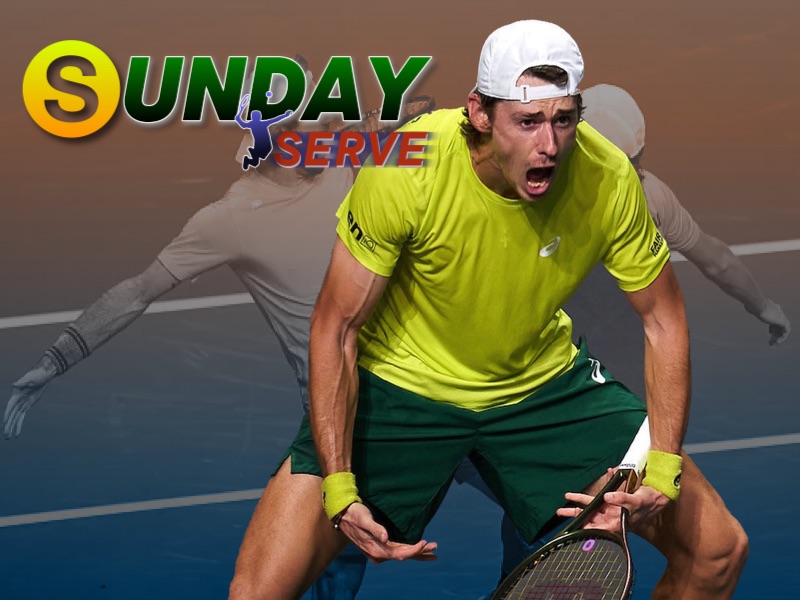 ITS ranking has diminished over recent years, but for many the Davis Cup still rates up there as a major achievement in world tennis.

Hewitt, a former world No.1 who won two Grand Slam singles titles during his career, is now the Australia’s Davis Cup captain.

And it is his ability to inspire that has seen Australian men beach e force once again in team tennis.

If you have never heard of the Holy Grail song by Aussie band Hunters and Collectors, go check it out on YouTube.

It’s one of those inspirational anthem songs Australian sport uses a lot – and to good effect.

And it’s been heard very loud in southern Spain this past week as the Aussies went through their sessions.

With Hewitt at the helm, his captain de Minaur, has won nine of his last 10 Davis Cup singles matches.

“To take my form on the ATP Tour to the next level, I probably need to bring Alex the Davis Cup player more often,” he said.

“But there is something special about representing your country, playing for Australia and being part of this team.

“It has always been a dream of mine and I will always do everything in my power to try and deliver for my country, my teammates and my captain. It’s pride, it’s passion and it’s a whole lot of heart.”

It’s a passion he has learnt from Hewitt, a player who always left everything on the court.

And Hewitt was front and centre of Australia’s wins in Malaga, as expressive on the sidelines as he ever was when playing.

“It means a lot to them. They wear their heart on their sleeve and they love wearing the green and gold. The reason I’m still doing this job is because I love the Davis Cup competition and I love representing Australia.

“My boys do a lot of hard work, they come together, and they back each other. That’s why I couldn’t be prouder.”

Wearing his hear on his sleeve, Hewitt has passed the baton to De Minaur, referred to this week as ‘mini-version’ of his coach.

Polish parliamentarian Katarzyna Kotula told local media she had suffered abuse as a young teenager from her then tennis coach Skrzypczynski.

“As current leader of women’s tennis I can’t remain silent,” she wrote.

“I consider the reports involving the Polish Tennis Association’s president as something serious.

“We need to think about them (the victims) first of all,” she said, listing helplines for those seeking advice.

She then urged the federation “to find out what went on”.

“It’s not my job to do the work of the association’s directors or reporters as the case is too serious involving the lives and wellbeing of others.”

ECO idiots hit the courts again during the week, in Malaga at the Davis Cup, trying to tie themselves to the net during a match between Croatia’s Borna Coric and Spain’s Roberto Bautista Agut.

Five security guards quickly grabbed the pair as they tried to grab onto the net.

And fans quite rightly jeered as they were taken away by security.

We won’t go into why this minority group think sits OK to stop the rest of getting on with our lives, but surely there needs to be better security at major sporting events going forward.

German Tennis Federation Vice-President Dick Hordorff said that this week that the DTB is ready to give Boris Becker a role after he competes his prison sentence.

Becker was found guilty of hiding assets after declaring bankruptcy, but could be released soon.

Hordorff told Sport Bild that “nothing speaks against him taken over a function again when he has served his sentence. I can imagine many things for Boris: Head of Men’s Tennis, representative, board or whatever else.”

A convicted fraudster – all forgotten and forgiven?

Other sports have what they term ‘fit and proper ;persons tests’ for officials – seemingly not in tennis.

Britain’s Sue Barker revealed in a TV interview last week she got into ‘awful trouble’ for comments she made after Andy Murray’s maiden win at Wimbledon in 2013.

The former tennis player and and BBC broadcaster was in charge of conducting the post-match interviews with the players, and due to the momentous occasion decided to go off-piece with her script.

But she said tournament bosses were not happy.

“I got in awful trouble with Wimbledon, because Wimbledon had asked me, in the early 2000s, to do the on-court interviews and to read out… and you know, I have a little script. It’s very Wimbledon,” she said.

“The winner of the gentlemen’s singles trophy for whatever year it is is so and so.

“And suddenly, I looked over at Andy and he was crying, and I could hear on Murray Mount the crowd were going mad. There was such a buzz around Centre Court, I said, I can’t just read this. So I said, ‘We’ve waited 77 years for this!’ I just felt it needed something more.

“That was the highlight for all of us. He was amazing. The pressure he was under… I don’t know how he did it.”

The stuffy Wimbledon elite don’t like going off script – with anything – and were not amused.

THE finals of the first Australian Padel Open will be played during the Australian Open in January.

Tennis Australia sees the variation of tennis as a major growth potential and international players are set to compete against a growing number of Aussies for a share of a $20,000 prize pool.

“The team at Tennis Australia are committed to the growth of grassroots tennis and that extends to complementary formats such as Padel,” Tennis Australia’s Chief Tennis Officer Tom Larner said.

“It’s fantastic to be hosting the Australian Padel Open finals on the purpose-built Padel court at Melbourne Park in January.

“Worldwide, Padel is enjoyed across more than 90 countries and by more than 20 million players and whilst the sport’s introduction to Australia is only relatively new, there’s already significant uptake in its popularity.”

IN a quiet week that saw one media source go crazy over images Mick Kyrgios and his girlfriend decorating as Christmas tree – in November – Emma Raducanu (remember her?) took to having photos taken with another sponsor, this time Porsche.

Raducanu said their PR opportunity was “a lot of fun”.

No mention of a new coach or how the gym work is going ahead of The Australian open in a few weeks.

Federer said last week he was enjoying life away from the pro tour and had no immediate plans.

“I don’t think I was that much aware of it, how much that thought is always there, and it rides with you, until you retire and then you realise that stress all drops away,” he said.

“Once that all drops away you actually feel lighter, relieved that you can actually live normally again after 25 years.”

Federer retired from the sport in September after failing to recover from a long-standing knee injury.

AND finally …. another event to the calendar.

18 countries are now confirmed for the first ever United Cup, a new annual mixed teams event taking place in Australia from December 29.

The event will see matches in Brisbane, Perth and Sydney from December 29 to January 8.

Bulgaria will join Greece and Belgium in Group A in Perth. Kazakhstan will join Poland and Switzerland in Group B in Brisbane.

World No.4 Stefanos Tsitsipas will be up against former world No.3 Grigor Dimitrov of Bulgaria on December 29 at RAC Arena in Perth and recently crowned Billie Jean King Cup winner Belinda Bencic of Switzerland will meet Kazakhstan’s Yulia Putintseva in Brisbane.

The tournament, a partnership between the ATP, WTA and Tennis Australia, has a $15 million prize pot and up to 500 ATP and 500 WTA rankings points.

Brisbane, Perth and Sydney will host the group stages, two men’s and two women’s singles matches and one mixed doubles match to be played across two days.

Group winners in each city will play off for one of three semifinal spots.

Three City Champions will advance to the United Cup Final Four in Sydney from January 6-8.