Dad’s not the way to do it Emma 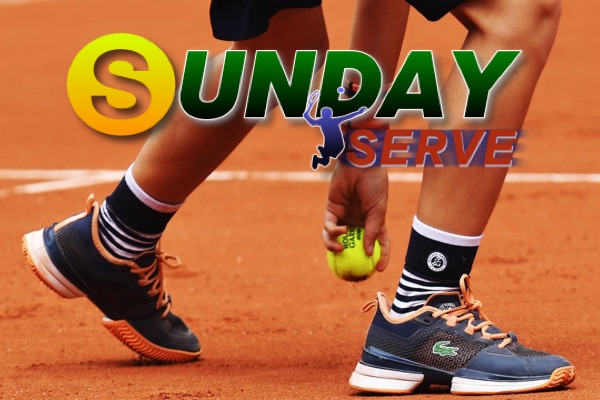 LET’S face it, Emma Raducanu, in her present state of play, is not the real deal.

She lost in the second round to Aliaksandra Sasnovich at the French Open last week, before setting her sights on playing on the grass in front of her home fans at Wimbledon.

“It’s going to be really nice to go home and play, you know, on home turf, on the home grass,” Raducanu said.

“It is going to be a little bit strange in the beginning, because I have played on clay court for so long now, I feel like it’s been weeks. Like, going onto a grass court I’m probably going to be a bit shocked at first.

But her current form suggests she will fair no better on grass than she has on clay, or any other surface since her US Open triumph last year.

She is still without a coach – having burned through three this year. And dad Ian’s controlling influence has frightened many others off.

And tennis legend McEnroe believes the ‘revolving door of coaches’ has hampered her development.

McEnroe told Eurosport this week: “Honestly, if I won the US Open having gone through qualifying, I wouldn’t change my coach at least for the next year, so I don’t understand that move.

‘Obviously her parents are involved and they know more than I know. But this idea of a revolving door of coaches I just don’t think that’s good for any player, much less so for a player at this stage of her career.

Raducanu is expected to open her grass season in Birmingham on June 11.

Rarely do professional sports men or women succeed while under the control of parents – to the degree Raducanu is believed to be.

She needs independent coaching, keep her parents, especially dad Ian, at arms length and more than anything, she needs to be physically stronger to be able to compete at the highest level.

Otherwise, this young talent risks disappearing down the rankings at lightning speed.

THE war of words between Aussie firebrands Nick Kyrgios and Bernard Tomic has boiled over after Kyrgios labelled Tomic Australia’s “most hated athlete”.

Tomic told media on Friday he was willing to put up $1 million if Kyrgios had the courage to back up his claims.

“At the end of the day, talk is cheap,” Tomic said. “I’m ready to make it 2-0 whenever you want. Put your money where your mouth is.

“Let the public decide who is better. I’ll beat you anywhere, any place. If not, shut your mouth and go back to playing doubles.”

And Tomic then added:

“I beat you once before, I’ll beat you again whenever you want,” Tomic said. “I dominate you every time we play, train, and we know that.

“You say you’re good at basketball, I’ll beat you at that too.

“Tennis? I’ll dominate you one-on-one. To not make excuses, I’ll even play you on grass, whenever you want.

“You know what? Let’s sort this out in the boxing ring. Put your gloves on, I’ll dominate you there also. Let’s see who’s better once and for all.”

But it didn’t stop there …

Tomic wasn’t buying it and hit out at Kyrgios’ claims.

“You said last week that you were the No. 1 player on grass — you’re dreaming. You have the No. 1 mouth in the world for sure.”

Kyrgios wasn’t about to walk away.

“I’m actually in a grass court training block right now preparing for tournaments. Wimbledon and then US Open swing.”

SIMONA Halep had a panic attack while leading her second-round match that she eventually lost 2-6, 6-2, 6-1 to Qinwen Zheng at the French Open on Thursday.

“I had a break in the second set, but then something happened. I just lost it,” Halep said in her post-match press conference.

“It was just a panic attack. It happened. I didn’t know how to handle it because I don’t have it often.”

Halep said she was assured by doctors that she’s OK physically.

“After the match was pretty tough. But now, I’m good. I’m recovered, and I will learn from this episode.”

THE All England Lawn Tennis Club will replace its Wimbledon honour boards ahead of the 2022 tournament, withdrawing titles before the names of its female champions.

According to The Times, honourifics in front of female winners will be removed next month to “move with the times”, while the process of married women taking the initials and surnames of their husbands will also be updated.

Since the tournament began in 1884, female champions had titles “Miss” and “Mrs” in front of their names, while the men didn’t.

Irina-Camelia Begu has apologised after her racket hit a child in the face when she bounced it into the crowd at the French Open.

The incident occurred in the third set of Begu’s second-round win over Ekaterina Alexandrova, with the Romanian chucking her racket into the clay before it flew towards spectators.

Begu – who checked on the child after the match and posed for photographs – called the moment “embarrassing” and admitted she was fortunate not to be defaulted.

“It’s an embarrassing moment for me, so I don’t want to talk too much about it. I just want to apologise,” said Begu.

“My whole career, I didn’t do something like this, and I feel really bad and sorry. So I’m just going to say again, sorry for the incident.”

Picture of the week…

A little girl managed to sneak onto the court Suzanne Lenglen to greet her idol Rafa Nadal at the end of her match.

BRIT Dan Evans wasn’t too bothered about being booed at the end of his French Open second-round defeat.

“I gave away the last point, but I couldn’t care less to be honest with you,” Evans said.

“I think I’d put enough effort in for three-and-a-half hours. I was physically spent. That was it for me. That’s the way it is.”

Evans said he’d had a chest infection for a week.

“I’ve been struggling just with that really,” he said.

“Normal symptoms, sweating a lot in the night, bad sleep. The normal stuff. It probably took a lot out of me playing through, getting ready. It’s unfortunate.

“Still it’s not an excuse. I was in some good situations but physically I wasn’t spot on. It is what it is.

FORMER British No. 1 and Wimbledon member Andrew Castle waded into the player ban and subsequent points withdrawal this week, criticising in a column players referring to this year’s event as an exhibition tournament.

“I find it bewildering Naomi Osaka or any other player in the draw would refer to the championship at Wimbledon as an exhibition event,” Castle wrote, without noting this is exactly what the BBC in London has labelled it.

“That the ATP and WTA should only have vision to the end of their noses is shameful. They talk in reverential tones about the integrity of their ranking system while the bodies of men, women and children are being exhumed from shallow graves,” he added.

“Can the players’ councils on the men’s or women’s sides say they have truly canvassed the opinions of their constituents? It sounds to me they have not done so on this critical issue.”

Wimbledon certainly didn’t canvass players, or consult with either the ATP or the WTA, after they bowed to UK government pressure.

On the ATP other side of the argument Council member John Millman hit out at the lack of consultation over the banning of Russia and Belarusian players.

“Look, my old man’s flown over for it, Wimbledon’s hallowed ground, mate, a beautiful place. I love it,” Millman told AAP News.

“But I don’t like how they went about making the decision. If the whispers are that it’s government guidance, get the government to come out and say it was them.

“There were two options – recommendations, not even laws – given by the UK government. One, to sign a declaration, and be able to play; and the other one to ban them. Without really any consultation, a unilateral decision was made to ban players.

“It just goes against what tennis is about.

“I have a problem with lack of communication. The player council, player reps on the ATP board, hadn’t been consulted until after the decision had been made.

Yes, Andrew, the BBC got it right – for a change – Wimbledon circa 2022 is just an exhibition event.

Novak Djokovic has described himself as “heartbroken” over the news of Boris Becker’s two-and-a-half-year jail sentence for bankruptcy fraud.

The two have remained in close ever since.

“Even when we stopped working, our relationship kept going in a right way. I have been in touch with one of his sons, Noah, and asking if there is something that I could do,” Djokovic said on Friday in Paris.

“I’m just very sad that someone I know so well, and of course someone that is a legend of our sport, is going through what he’s going through. It’s been only less than a month. We know how long he has to be there. So I just hope that he will stay healthy and strong.”

Who will win the French Open next weekend?

Ask Big Mouth. John McEnroe is backing Novak Djokovic over Rafa Nadal. No mention of the new kid on the block – a teenager named Carlos.