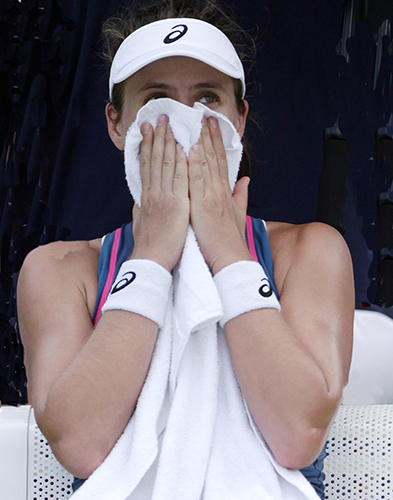 Brit Johanna Konta received a major blow on Sunday as she was withdrawn on the eve of Wimbledon due to contact with an unnamed COVID-positive person.

All England Club officials showed they are not joking with their uber-strict player guidelines as they yanked the British No. 1 from the lineup of her home Grand Slam without warning.

Konta came into the major with a grass title this month at Birmingham; she was seeded 27th and had been due to open in the first round against weekend Bad Homburg finalist Katerina Siniakova.

No details on specifics in the Konta incident were given by Wimbledon officials, who merely announced that she was out.

“In line with government legislation, Konta is required to spend 10 days in self isolation,” a statement from umpiring supremo Gerry Armstrong read.

“Following the withdrawal of Miss Konta, her position on line 8 (of the draw) will be replaced by lucky loser Wang Yafan.”

Konta would have been competing at the event for the ninth time with a 2017 semi-final her best showing here.

Players are placed immediately into strict hotel-tournament quarantine with only three support team members allowed to be with them.