She comes from a land Down Under: French Open Champion 2019

Ash Barty will rise to second in the world after winning the French Open on Saturday with a crushing 6-1, 6-3 defeat of Czech Marketa Vondrousova.

Eighth seeded Barty beat her 19-year-old opponent for the third time without a loss and was dumbfounded at the end of a magnificent display.

“It’s been a crazy two weeks, I’m so proud of myself and my team.”

“Marketa has had an amazing season, not just here for all season long. It was nice to play against her today.” 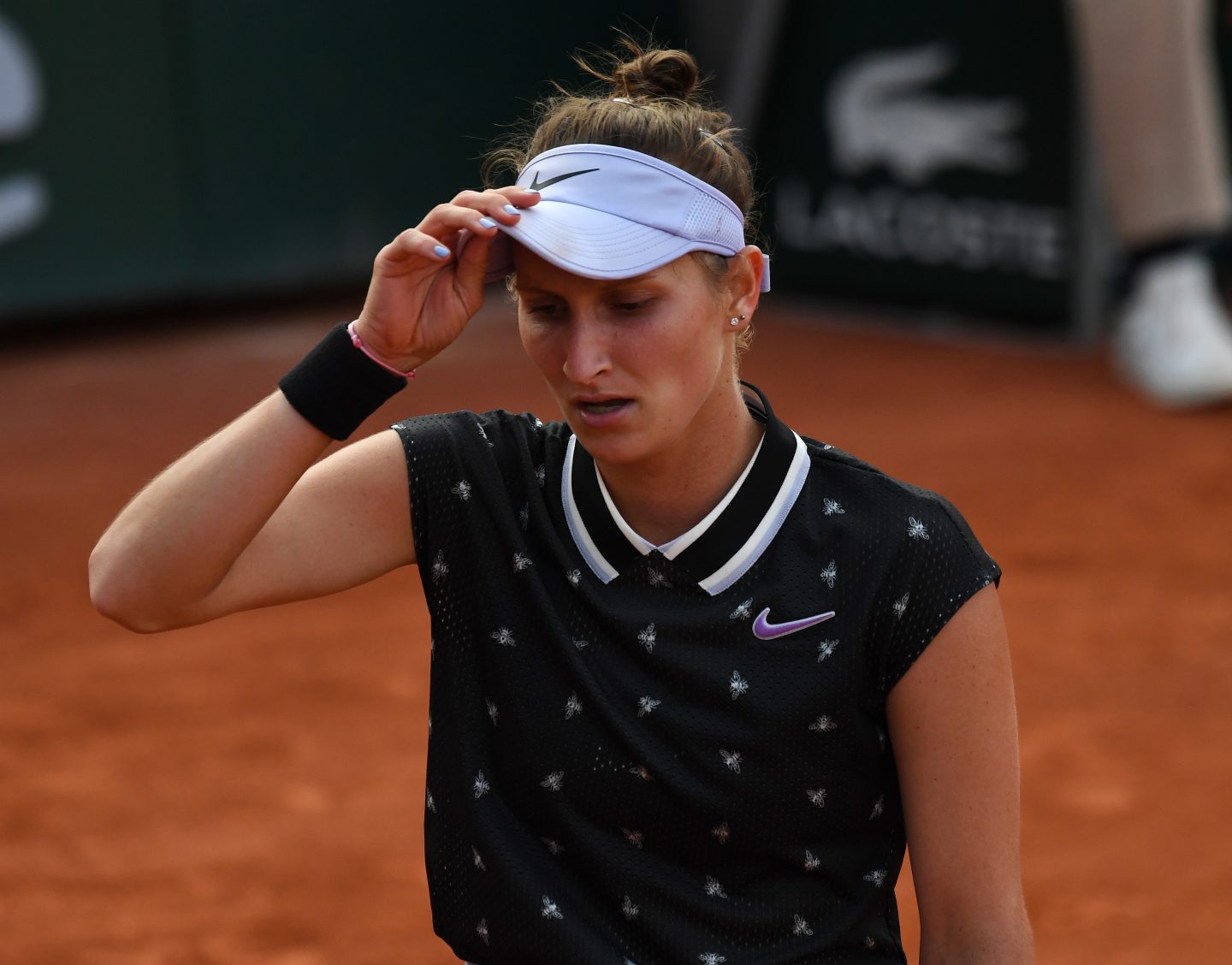 The player who interrupted her career as a teenager to play a season of women’s cricket in Australia and returned to rank 325th on the WTA, becomes the first from her tennis-mad nation to win the clay major since Margaret Court in 1973.

Sam Stosur finished runner-up here in 2010. “Sam was so close before, this is a special place for Australian tennis,” Barty said. “I’ve had a magical two weeks.”

Barty has been building all season for her biggest success,reaching the Sydney final in January, then adding on a first Grand Slam quarter-final at the Australian Open a fortnight later and winning Miami in March, her fourth career title.

The Queenslander was never in trouble against the 38th-ranked Vondrousova, also competing in her first final at a major.

Barty finished with an overhead smash on her first match point to win it in 70 minutes. 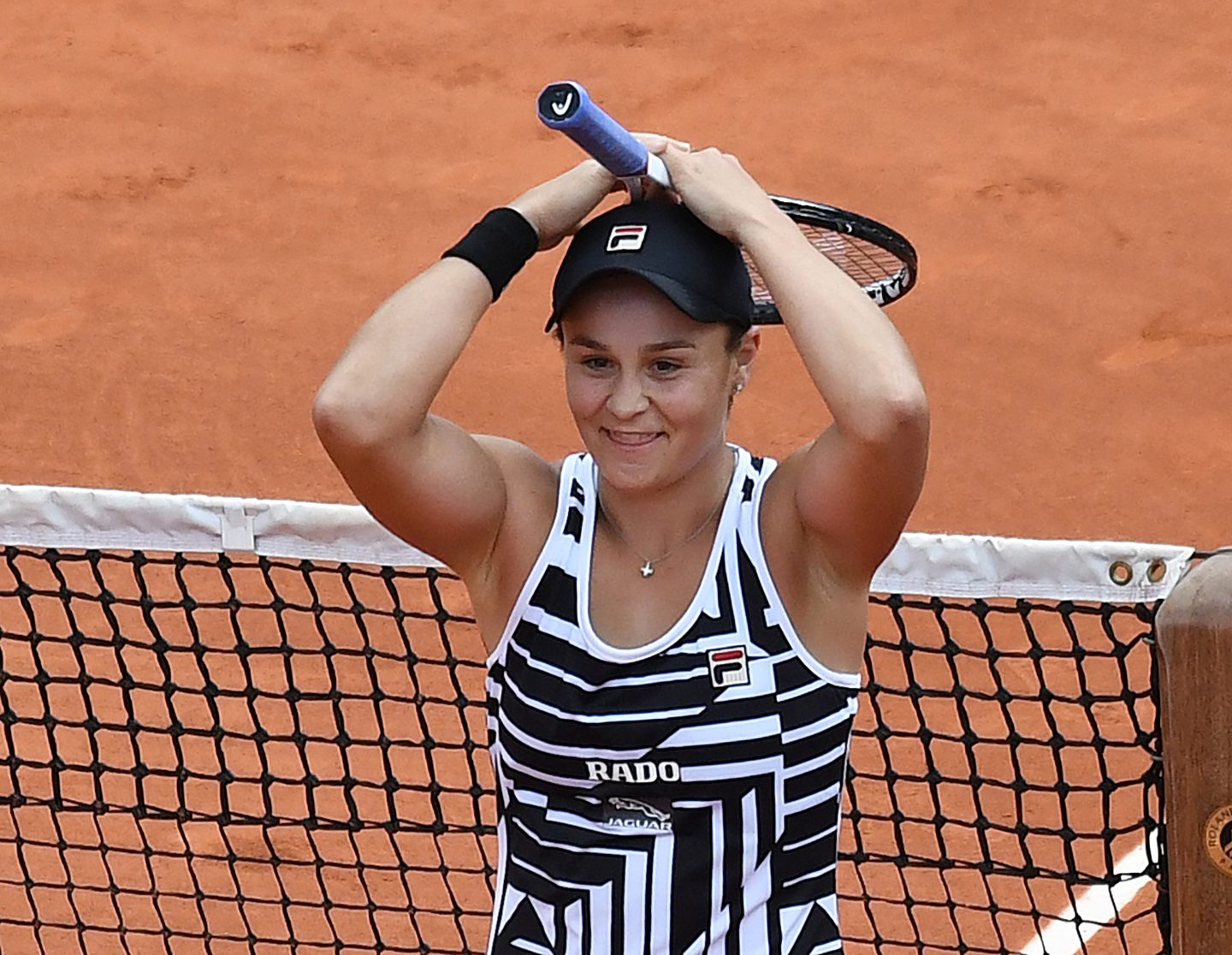 Vondrousova said she was outplayed on the day.

“You gave me a lesson today,” she told Barty said during the trophy ceremony. “You are an amazing player and such a nice person, you deserve this win.

“Even if I didn’t get the win, I really enjoyed my time here, I’m happy with all that happened.”

Ash Barty has it all to play for as the new French Open winner heads onto the grass prepared to threaten top-ranked Naomi Osaka in the sprint to Wimbledon. 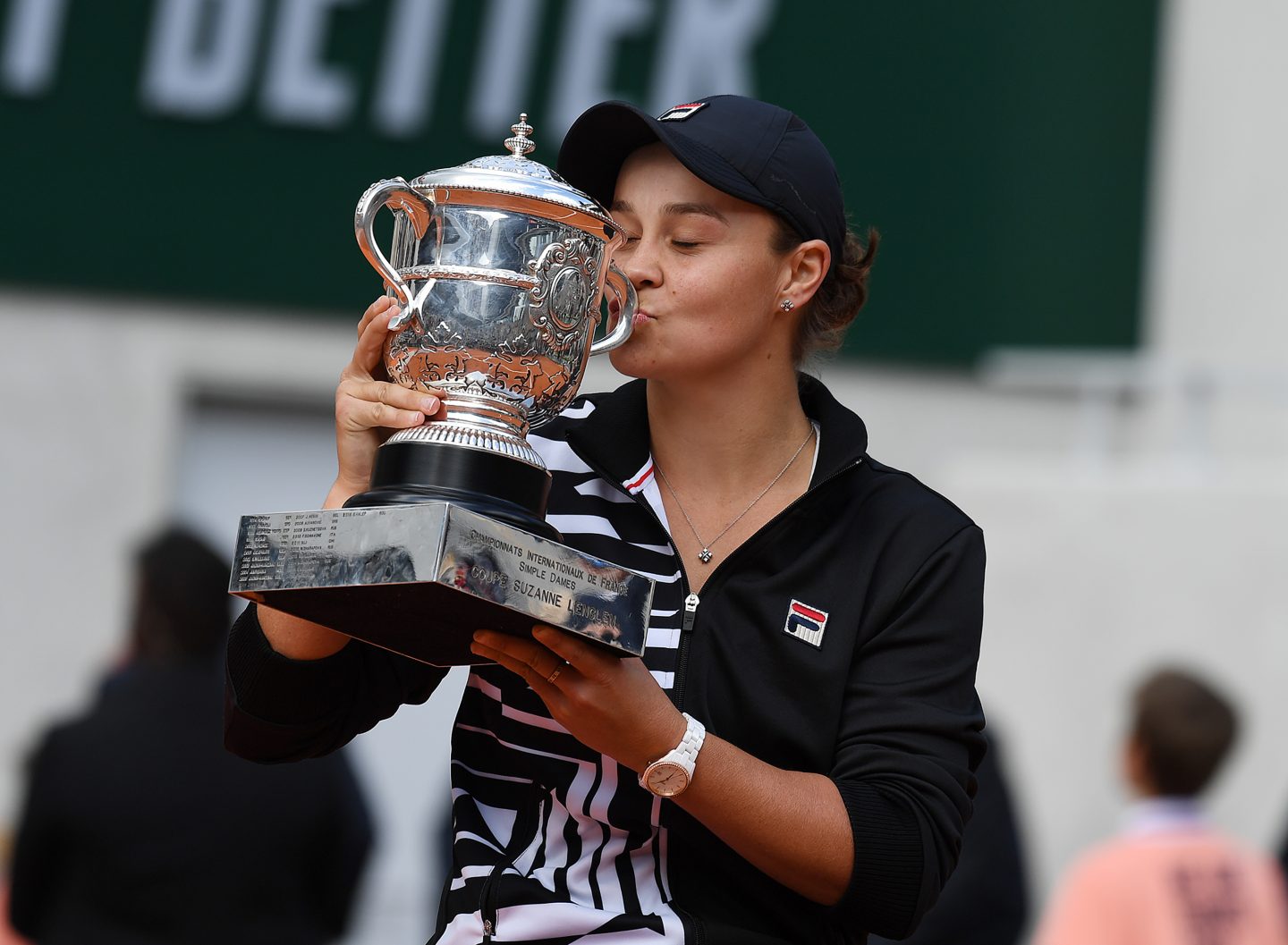 Barty will rise to No. 2 on the WTA list after her Roland Garros triumph, a 6-1, 6-3 win over Czech teenager Marketa Vondrousova.

But the 23-year-old Queenslander has an ace up her sleeve – she’s about to start the grass season, one of her favourite times of the year.

While she has yet to pass the second round at the All England Club, included in her five career titles is the Nottingham grass trophy from last summer.

Unfortunately, due to her unexpected run on the Paris clay, Barty will not be able to defend.

“I love the grass, excited to play in UK, but for now I’ll take a couple of days off.”

“I am sorry to miss returning to Nottingham and the chance to defend my title. I hope to be back and start my grass season here next year.” she posted on social media.

Barty is already within striking distance of Osaka, whose game has gone off the boil after winning the Australian Open title in January; that came in the wake of her 2018 US Open trophy success as she beat a melting-down Serena Williams.

The Japanese No. 1 has played Wimbledon twice, winning two matches at each edition; her career record on the surface is 10-7 while Barty stands 18-8.

The newest Grand Slam champion stands a formidable 31-5 on the season.

Her second ranking makes her the highest-ranked Australian woman since Evonne Goolagong Cawley in December, 1976.

“When I started playing tennis I tried to build a unique style. I looked up at Yvonne, but my coach always reminded me that we were creating our own style,” Barty said.

The Aussie said she could not let her Paris finals chance go to waste.

“I just told myself I may never get this opportunity again … try and grab it with both hands, try and play my brand of tennis – it was just incredible today,” she said.

“This new phase of my career has brought a new sense of trust and belonging to this level of the game.”

The winner said that her decision to pause her tennis in 2014 and play a season of women’s professional cricket was not meant as a goodbye to the court. 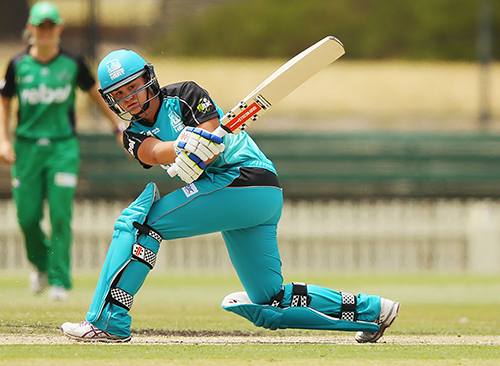 Ash Barty during a Women’s Big Bash League match between Brisbane Heat and the Melbourne Stars at Junction Oval on December 5, 2015 in Australia.

“I never closed any doors when I stepped away. I needed time to be a normal person.

“I was still hitting tennis balls. I missed the one on one battle the ebbs and the flow and becoming vulnerable.

“If I hadn’t stepped away from tennis in 2014 I certainly wouldn’t be sitting here with the trophy, I don’t know if I’d still be playing tennis,” 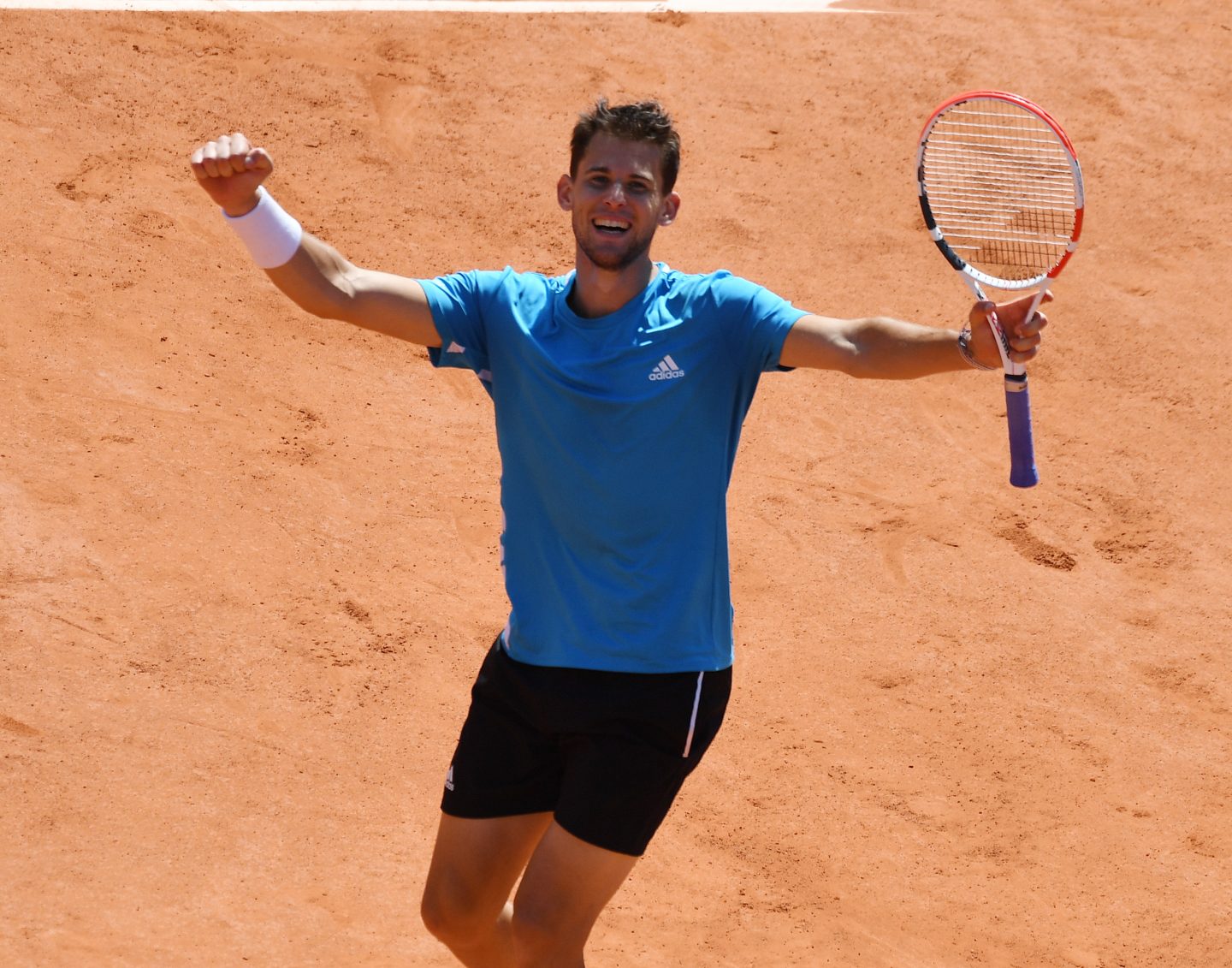 Djokovic was in the chase for a 27th consecutive victory at a major, which would have put him into the Sunday final against 11-time champion Rafael Nadal.

He lost his chance for a second career Grand Slam sweep on Saturday as he fell short in Paris after winning Wimbledon plus the US and Australian Open titles since last summer.

After stunning world No. 1 Djokovic 6-2, 3-6, 7-5, 5-7, 7-5 in a semi-final played over two days which lasted a total of four and a quarter hours, Thiem will take his place in the title shootout with Spain’s king of clay.

Nadal booked his 12th Paris final as he defeated Roger Federer on Friday.

The Thiem-Djokovic match was interrupted after the pair split sets with fourth-seeded Austrian Thiem leading 3-1 in the third.,

“It was an amazing match, my first in five sets here,” the four-time Paris semi-finalist  said. “I’m here in the semi-finals with three of the best player in the world

“They’ve all won at least 15 Grand Slams, every time I beat one of them it’s amazing.

“It was unbelievable for me.”

With Thiem leading in what Djokovic called “the worst conditions I’ve ever been part of,” the match was interrupted by rain on Friday evening.

What Djokovic called “hurricane conditions” later died down slightly, both players had already left Roland Garros for the evening. 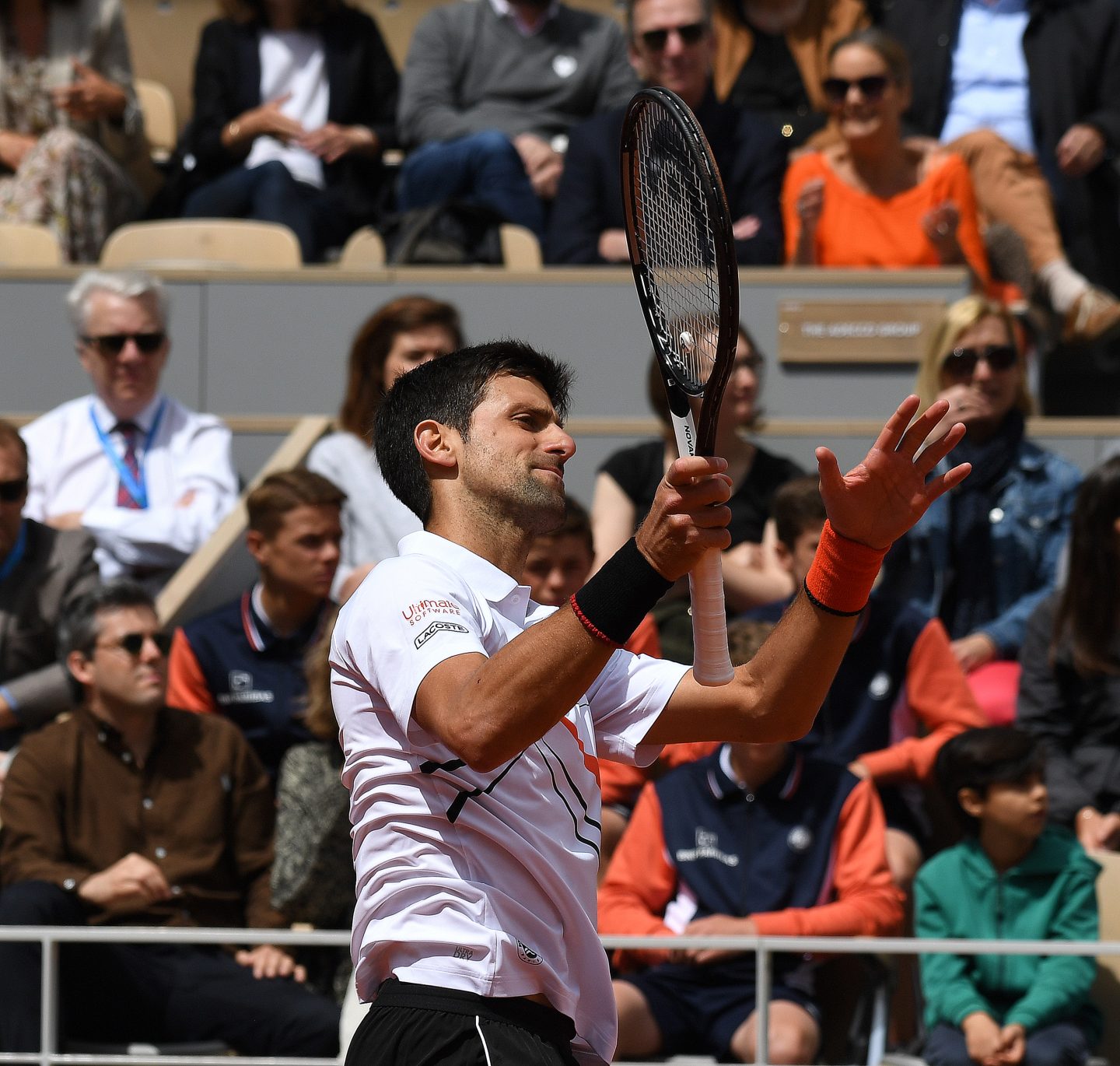 They returned on Saturday and re-engaged in the struggle for supremacy.

After Thiem collected the third set for a 2-1 lead, two comeback from a break down in the fourth went for nought  as Djokovic squared it at two sets each with a break on the Austrian’s double fault followed by a hold for the set.

Thiem served for victory in the fifth set, but was broken after failing on two match points..

But a series of Djokovic errors three games later lined up another match-winner for Thiem, who won as his opponent sent a forehand into the net.

“It’s never easy to go on an off the court,,” Thiem said after going to the locker room for an hour as rain returned briefly early in the final set.

“Reaching the final again is great but anyone who reaches the final here will be paying Rafa,” Thiem said of the Spaniard who owns an 8-4 record in their series.

Thiem beat Nadal on his way to the April title in Barcelona.

“He is obviously the favourite, but I’m looking forward, I’m ready to leave everything on the court again,” he said of the re-match of the 2018 final here won by Nadal.

Djokovic gave his congratulations to Thiem: “He played great, especially in the important moments.

“Made some really good slices and passing shots; he managed to put one ball extra in the court at the end of the match.”