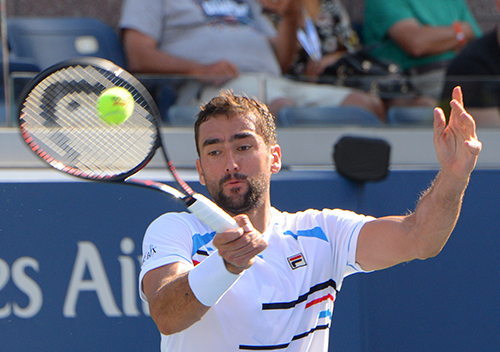 Fortune began to smile again on former No. 3 Marin Cilic as the 2014 US Open champion finally won a third match in succession.

The performance came on Monday at the Miami Masters where the 32-year-old Croat reached the fourth round with a 6-3, 6-4 defeat of 19-year-old Italian Lorenzo Musetti.

It’s been more than a year since Cilic strung together three consecutive wins; he last did it 14 months ago at the Australian Open.

Rublev stands 3-1 in a series where the protagonists will be meeting for the fourth time this month,

Rublev, winner of an ATP-leading 17 matches this season, won their Rotterdam, a quarter-final in Dubai and received a walkover against the Hungarian a week earlier in Doha.

Cilic needed 67 minutes to account for the 94th-ranked Musetti,  an Acapulco semi-finalist just over a week ago.

Raonic ran his record in the series to 2-0 after victory last November at Paris Bercy; the Canadian is into the MIami fourth round for a fifth time in 10 appearances.

“This was my third match in a row on the same court and I just got used to the conditions,” Cilic said.

“I felt quite good on the ball today and I returned well. I put a lot of returns back in comparison to the first two matches.

“It was a very good performance and definitely something motivating for the next matches.”