Croatia captured a second Davis Cup title 13 years after its first as Marin Cilic led the way to a 3-1 trophy victory.

The victory earned revenge of sorts for Cilic, who was beaten two years ago in the final against Argentina by Juan Martin del Potro in a must-win fourth rubber in Croatia.

“It’s not every day you become a world champion,” Cilic said as victory celebrations erupted and champagne spewed among the winning Croatian side.

The Balkan nation will stand in the records as the last to win the competition in its traditional  form before a tightly condensed version, one-week version of the 118-year-old event makes its debut in a year in Spain.

The victory over France marked more disappointment for the hosts, who have a spotty record when playing finals at home. 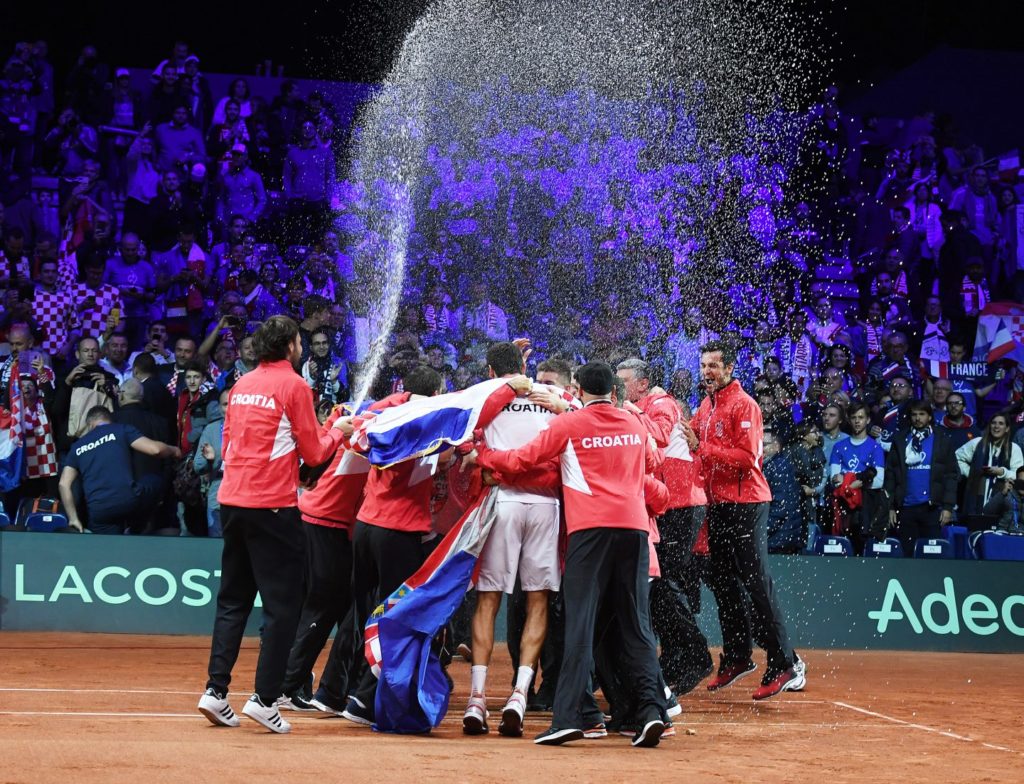 The defending champions under captain Yannick Noah fronted up under-powered with experienced racquets Gael Monfils and Gilles Simon both missing and one-time national No. 1 Jo-Wilfried Tsonga only just back on court after knee surgery.

Cilic, ranked seventh on the ATP, won both of his singles ties in straight sets, beating Tsonga on day 1 and finishing off the weekend early with a 7-6(3), 6-3, 6-3 hammering of substitute Lucas Pouille. 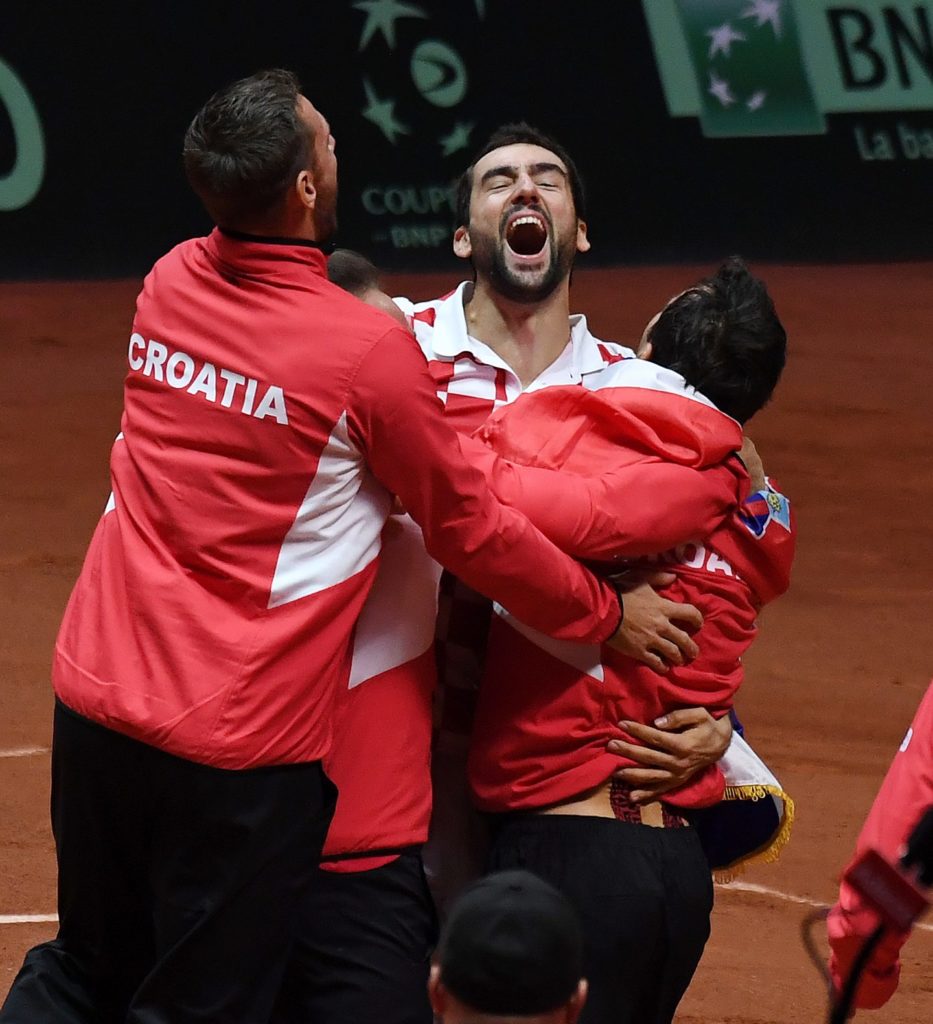 No. 32 Pouille had little to offer after a poor season, losing serve to go down  on Cilic’s third match point after two hours, 19 minutes in front of a crowd of 26,000 in Lille, northern France.

Cilic dominated, converting on three of a dozen break points while never facing one himself.

Croatia won its only other Davis crown in 2005, also away tie against Slovakia in Bratislava.

“It’s been a dream weekend, it’s an incredible feeling to win this,” Cilic said. “There is nothing like playing in this final.

“To win both of my matches in straight sets is unbelievable. It was tough, I’m extremely proud, I tried to give my best.”

France were bidding for an 11th title but would have had to complete the first fightback from 0-2 down in a final since Australia managed it over the US in 1939.

Pouille was put into place for Sunday’s first reverse singles by Noah, substituting for Jeremy Chardy, who was thrashed on opening day by Croatian Borna Coric.

“We had a feeling Pouille might be on the court,” Cilic said. “But it didn’t matter,

“We won with a team effort,”

Croatia captain  Croatian captain Zeljko Krajan was equally thrilled: This is an incredible experience, we’ve waited so long for this.

“Marin played very concentrated and stayed calm, he showed his experience. It’s not easy to play good tennis under this pressure.”

“We have a very deep squad and we’ve worked hard for this. I’,m very proud of all the players.

“They gave themselves and it worked out in the best possible way.” 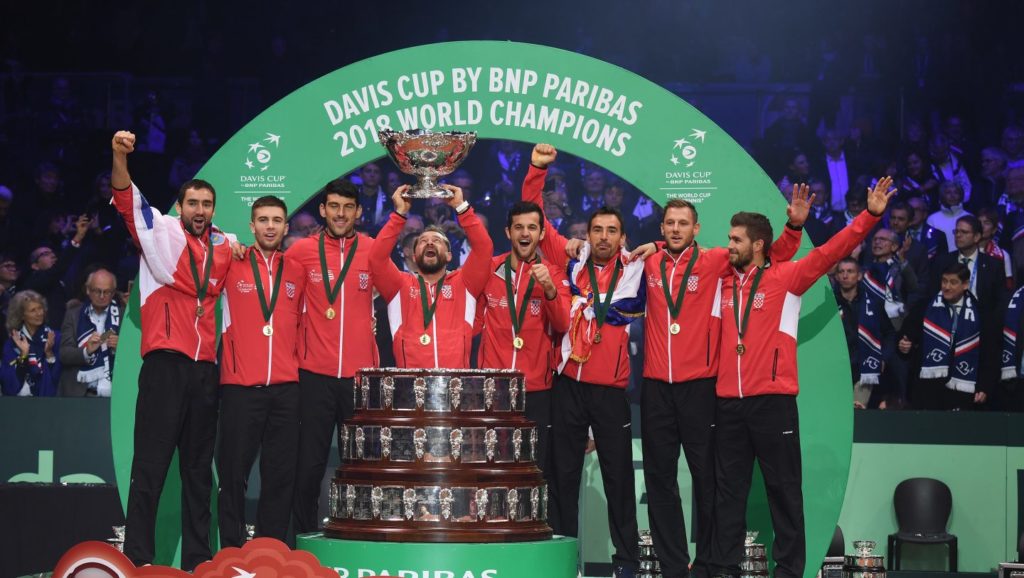 Nicolas Mahut and Pierre-Hugues Herbert got the only point for France by winning the Saturday doubles rubber,

France had been hoping to win an eighth consecutive tie as Noah ended his third career run as captain.

The former Roland Garros champion more than three decades ago  led France to Davis trophies in 1991, 1996 and a year ago against Belgium in which Pouille clinched the decisive point.